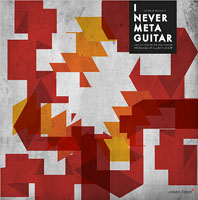 There are no fans of the guitar in today's creative music—they are better described as fanatics, or devotees. But then the guitar has always caused listeners to choose sides. I'm a fan of Jimmy Page and you, Pete Townshend—or do you prefer Wes Montgomery to my Jim Hall. John McLaughlin or Pete Cosey? Some of these debates have, thankfully, carried on for years.

With a new century comes new names, and allegiances are redrawn as new techniques are introduced and thankfully new sounds created. Clean Feed Records asked avant-guitar legend Elliott Sharp to curate an album of today's guitar improvisers and technicians, some familiar names like Nels Cline, Henry Kaiser, and Noel Akchote, and others that are less well-known.

The hottest name in jazz guitar circles these days is Mary Halvorson—featured in bands led by Anthony Braxton, Tom Rainey, Taylor Ho Bynum and Tomas Fujiwara, her Dragon's Head (Firehouse 12, 2008) has been heavily celebrated by critics. Her rapid-fire note twisting has become a signature, and can be heard on "In Two Parts Missing." The word "slippery" also applies to Finnish/American guitarist Raoul Bjorkenheim, perhaps known best for his Scorch Trio sound, which blends the intensity of rock with flights of free jazz. Here, he hints at the stratosphere, but contains his rock with a rolling electric viola.

Michael Gregory is the only musician here who doesn't perform solo, his Danish trio performing a swinging blues piece. Other players add overdubs and effects to create the sense of multiple players. Chicago Underground guitarist Jeff Parker, for example, utilizes three guitars and varying effects and delays, to develop an understated and cerebral delivery of notes. Others also work with multiple instruments, such as Henry Kaiser's five acoustic and one electric amalgamation, and Jean-François Pauvros' extended technique for two guitars.

Then there are the simple, no-effects guitarist Scott Fields and Janet Feder, and the pure sound of Brandon Ross, with his banjo.

With I Never Meta Guitar , there are plenty of sounds to discover, from old and new favorite guitarists.

In Two Parts Missing; Act As If Nothing Ever Happened; Blame It On The Tonkori; Migrant Song; Heater; I Told You So; Joanna; Study for Hairpin and Hatbox; Until Iago Whispered; Storyteller (Ornette Coleman); Blue Blue; Buzkashi; Little Creatures; Coiled Malescense; The Day Rauschenberg Met de Kooning; Telemetry.