Mississippi Heat: Let's Live It Up! 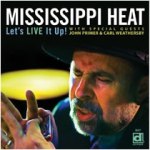 In times like these, the blues form is well-placed to reflect them, and with its sometimes fine balance of the urban and the down-home, Mississippi Heat is a band more than capable of doing it.

Pierre Lacocque, a mouth harp virtuoso without any of the negative connotations such virtuosity might imply, has been leading the band for awhile now, and Let's Live It Up! shows he's doing it as effectively as ever, just as he's coming up with originals for the band to perform.

That said, there are factors working against the effect of the music. "She Died From A Broken Heart" is more deep soul than blues, and the presence of backing vocalists means it comes out more as sophisticated soundtrack than anything else—until, that is, Lacocque's solo takes things higher. Sure, he's a virtuoso in who knows his instrument inside out, but Lacocque never strives for effect, and the balance between head and heart is about 25/75, making for telling expression.

"I Want To Know" benefits from both Carl Weathersby's stingingly effective guitar and Inetta Visor's no-holds-barred vocal delivery. Like Lacocque, they both exemplify expression, as they're so far inside the blues that there's no way back—and that's a good thing.

The title track is all about the right circumstances for letting off the steam built up over the course of the possibly degrading working week, its message timeless, but with something contemporary about it, too.

Lacocque's all over the intro of "Enlighten Me" in the best possible way, before Visor takes over with her forthright delivery. Considering how long the band's been together, its tightness can be taken for granted, but that doesn't alter the fact that there's no sterility to be found. Here, as elsewhere, the groove is nailed, but not without the inclusion of little surprises, as Christopher "Hambone" Cameron's piano solo shows.

"I Got Some News Today" is as down-home as anything here; John Primer takes both the vocal and a tellingly concise guitar solo, and Lacocque gets to do his inimitable thing in fine style.

"Until We Meet Again (Au Revoir Et a Bientot)" closes things out in similar fashion, also showing what a night out the band provides. Rounding the program out nicely, it shows, too, that there's still plenty of life in the blues form.