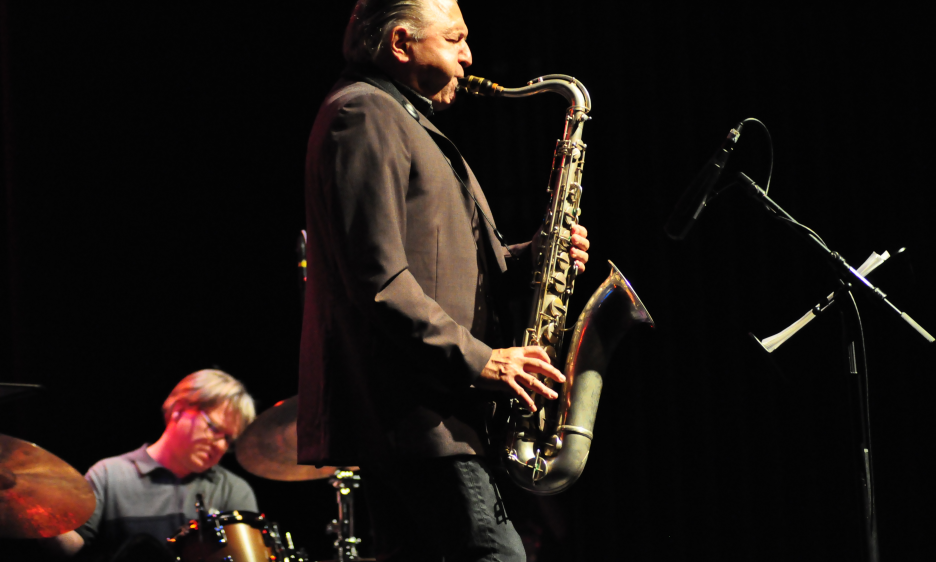 Jerry Bergonzi has developed the reputation as an 'insider’s' player, yet his approach is assertive but never unnecessarily abstract–unafraid, but not oblique.

"There are so many beautiful players in the world... and so few listeners," announced Jerry Bergonzi somberly from the stage, to a smatter of chuckles. That punchline might be flipped on its head in Hong Kong, where there is no shortage of upmarket bars in the Central district programing at least some semblance of "jazz," but just a small roster of pro players gigging on ready rotation, which is why the Hong Kong International Jazz Festival is such a relative treat. Still, ten acts over four bills is an admittedly modest offering for an international hub of HK's might, cosmopolitanism and affluence.

Playing the final night—and with a garish illustrated facial likeness plastered on every flyer —American sax titan Bergonzi was the de facto headliner and undisputed highlight, barreling through an 80-minute set which had the air of a rootsy masterclass in small group traditionalism in comparison with the preceding three nights of modern, world and fusion flavors. And it was an intensely distilled dose, the sound of a straight acoustic quartet playing with a ferocious confidence, painting an old-school Renaissance portrait in the big, bold brushstrokes and primary hues of Pop Art. Opener "Blue Cube" was a tectonic slumber, lumberingly driven by bassist Johnny Åman, while "Double Bill" cheekily cast Bill Evans the standard "Blue in Green" as a skittish bop workout in 20 bar, not 10, form.

Despite battling with a faulty octave key, 70-year-old Bergonzi's playing was sublime throughout, possessing the fluidity, power, grace and swagger of a prize fighter just getting warmed up. The first movement of his "The Seven Rays" suite, ripped asunder from the whole, brought out some of the tenor man's fiercest phrasing, unleashing furious flurries of triplets that left me thinking of Sonny Rollins, while drummer Anders Mogensen and pianist Carl Winther traded some wonderful staccato statements built upon the song's frenetic head.

Perhaps because of his enduring role as an educator, Bergonzi has developed the reputation as an "insider's" player, yet to these ears his approach is assertive but never unnecessarily abstract —unafraid, but not oblique. Moreover, the former Dave Brubeck sideman has the curious habit of bee-lining stage right, two bars before wrapping every solo —turning off the tap when we all know he has so much more to say.

It's perhaps fortunate that the band which proceeded Bergonzi on Saturday October 13 didn't feature a horn —with HKIJF welcoming the Asia debut of Canadian-American quartet B's Bees, who served a satisfying set that largely trod the hard bop idiom. At its centerpiece sat "Kanata," a monolithic, four-part suite composed by leader/drummer Brandon Goodwin inspired, the leader said, "by the history of Canada," which also serves as the title track of its third album. Live, the piece spun to three times the CD version's length, breaking the 30-minute mark, segueing between spells of moody riffing and restrained, unaccompanied solo showcases -with the spooky slides, drones and chords of Alec Safy's bass-work especially memorable.

Politics also splattered the canvas of the set's sole cover, a moody modal workout on Charlie Haden's Spanish Civil War ode "If You Want to Write Me" —which played to the shrill, clean Bill Frisell-esque Telecaster tone of guitarist Julien Sandiford—while pianist Joe Ferracuti contributed "Refuge," a ballad peppered with some angular Thelonious Monk-ish turns. The rest of the quartet's original material toed too close to the beloved hard bop/Blue Note aesthetic to be truly original.

Beyond this bop-based, North American closing double header, HKIJF offered a wholehearted tribute to that most symmetrical of improvisational vehicles —the ever-reinventing-itself jazz trio, with the first three of its six headline acts all strictly acoustic, but stridently forward-facing, European piano-bass-drums affairs.

Gorgeously colored by chiming piano percussion, cello-esque bowed bass and shimmering cymbal work, the Kari Ikonen Trio exemplify a distinctly Scandinavian collective work ethic —where solos neither end nor begin, but bleed into the collective whole. It's the kind of meditatively pastoral, post-ECM sound-scaping which can't help but evoke real-life landscapes—so it's fitting their leader/composer appears to take such deep inspiration from dramatic climates.

Drawing liberally from the trio's excellent third CD Wind, Frost & Radiation (Ozella, 2018) over Thursday's headline slot, the effortless lyrical opener "Kuro" is named after a valley in the north of Finland, while "Pripyat" hopes to evoke the Ukrainian ghost town left to the ravages of nature following the Chernobyl nuclear disaster of 1986 —spookily marked by bassist Olli Rantala disorientingly descending a full octave in a slowly bowed meter.

A response to Debussy's impressionistic masterpiece "Prélude à l'après-midi d'un faune" —and opener of the Finnish trio's penultimate release Beauteous Tales and Offbeat Stories (Ozella Music, 2015)—pianist Kari Ikonen's "L'avant-Midi D'une Elfe," begins with rolling, lyrical keywork that calls to mind rippling rapids or shimmering raindrops. Apparently inspired by the seasonal winds which blow from the Sahara through West Africa and into the Gulf of Guinea, "Harmattan" is just Ikonen's most memorable use of string muting, striking a hypnotic African-flavored pentatonic riff, before transmorphing into a morbid, metal-esque strut. The dampened strings which again punctuate "Beatamente" meanwhile recall the regular chime of a clock, or perhaps a church bell.

Seasoned jazz fans may of course take all this reality-conjuring with more than a whiff of skepticism, knowing how difficult musicians typically find it to name instrumentals —and the endearing audience appeal of segueing between otherwise dense, challenging music with charming explanatory tales. On the face of his introduction, it's seems that Ikonen has never visited Pripyat (and one wonders if his familiarity with the winds of West Africa came from a documentary). But it's the art that counts, not the intent —and Ikonen, a former winner of Finland's Jazz Musician of the Year award, is a serious artist making work with a color and conviction worthy of any of today's leading European three-pieces, of which there was another to seep into.

If Ikonen's work recalls the countryside, then there's something about the city to Norwegian neighbors the Espen Berg Trio, whose own brand of Nordic airiness was driven by a distinctly urban pulse; one hears the clatter of public transport in the handclaps driving "XIII," angrily intercutting traffic in the disconnected threads of "Tredje," the whir of elevators, escalators and air conditioning in the softly shifting rhythmic patterns driving the pervading pulse of airy introspection.

Playing the bulk of this year's CD Bølge (Odin Records, 2018), the edgily shifting sonics were navigated with organic ingenuity by fellow travelers, bassist Bárður Reinert Poulsen and drummer Simon Olderskog Albertsen. Only the world premiere of a new piece called "Skrivarneset"—named, Berg later told us, after the remote spot on Vestvågøy, part of Norway's Lofoten archipelago, where it was written this summer —broke the telepathic spell, while sporting a folkish theme which may hint at new pastoral flavors ripe for exploration.

Rewinding 24 hours, it was something of a scheduling cruelty that saw Ikonen followed onto the stage by the Dusha Connection, a lesser piano trio not without promise, but whose relative inadequacies were only magnified by inviting such comparison. Young and choppy, there was a missing sense of identity in the Austrian group's overlong Asian premiere, which showed flashes of inspiration amid a generally directionless stroll.

The trio executed their modern-ish originals —generally roomy, undemanding minor key dirges —with more flair and conviction than the obligatory smatters of standards—including a troublingly brisk "Milestones"—yet most compelling were two deconstructed Slavic folksongs, "Mujo Kuje" and "Ajde Jano." Flitting between Old World meditations and traditional post-Bill Evans bop, one felt a group of players slightly adrift, neither fully committed to, nor fully realizing, either approach. Outshining his co-conspirators, one can imagine pianist Maximilian Tschida—persuasive, passionate and articulate, with the air of the conservatoire still lingering on his fingers—flowering into a greater talent.

Friday's headline slot was surely the greatest hometown showcase yet afforded to HK-based, South African singer Talie Monin, who possesses a crisp, crystalline voice, studious approach and solid band led by guitarist Dan LaVelle—an American expat who has graduated from showcasing protégé Monin as a featured artist in his own group, to sharing headline duties, and now eventually stepping back as musical director of the singer's clunkily named World Jazz Compendium.

The quintet's breezy approach to "world jazz" drew on the singer's heritage with the funk-flavored Zulu-language call for peace "Afrasia" and dug into LaVelle's repertoire of Brazilian folksongs, while showcasing Monin's jazz chops with a stately "I Loves You, Porgy" and a gripping version of Wayne Shorter's masterpiece "Footprints," following Kitty Margolis' exotic lyrical interpretation. A debut album, we were promised, is mere weeks away.

Backed by the VSOP-aping NTBM —that stands for Not To Be Missed—HK-born guitarist Tjoe man cheung showcased a very different side of the homegrown scene, performing at a free, al fresco harbor-side concert hosted at Hong Kong Cultural Centre on October 7, which fulfilled the joint role of outreach bid and publicity stunt.

Based around an electrified core trio of Cheung, bassist Scott Edwin Dodd and drummer Wong Yin Hong, NTBM's hard-riffing approach and tight dynamic shifts had that familiar feel of fusion played by rockers dabbling in jazz, rather than jazzers trying out rock —no bad thing, necessarily. But balance came from two able sax players—altoist Chak Seng Lam and stalwart CC Lee guesting on tenor—with the most thrilling moments when the reedsmen let loose over the pummeling tumult, unleashing crisscrossing improv lines in rough-edged tandem. Often stretching out at length, Cheung himself favored an angrily distorted tone which clearly divided the crowd of casual Sunday afternoon strollers.

Less contentious to passing ears were visiting Thai quintet Funktion, an endearingly energetic, shamelessly virtuosic instrumental act who spewed out the kind of groove-driven, up-tempo, "hard/smooth jazz" I figured had been buried in the 1980s. As dusk fell, the Hong Kong skyline unfolding behind the stage began to flicker into iconic illumination, part-starting duties were handed over to Columbian percussionist Alonso Gonzalez & Jazz Latino, whose Kuala Lumpur-based "Latin Jazz Quintet" did exactly what they said on the tin —delivering a big-hearted, hip-shaking hour of blissfully nuanced beat.