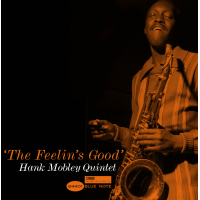 The mists of time have a way of obscuring the motives behind people's decisions. "What were they thinking?" and "It must have seemed like a good idea at the time" must be among the most universal human sentiments. In the music business, a session gets recorded, and often it gets released, but occasionally it doesn't. Sometimes a tape sits on a shelf collecting dust for fifty years, leaving later-day musical archeologists to ponder why. Maybe that session gets cut up, or it vanishes into obscurity. Occasionally we get lucky: someone remembers that it's there and makes the effort to release it to rabid music fans.

Sometimes it's worth the wait.

Music Matters has built a little niche for itself reissuing classic Blue Note records of the 1950s and '60s on 45rpm vinyl. This time they've gotten their mitts on something really extraordinary: a complete session by tenor saxophonist Hank Mobley that's never been released as a single album. These people at Music Matters, they're pretty smart folks. If you get your hands on something like that there's really only one thing to do with it: press a record.

The tracks on this record were recorded in a single session, Thursday March 7th, 1963 in the Rudy Van Gelder studio in Englewood Cliffs, NJ. We'll never know what he was thinking, but Blue Note's owner, Alfred Lion, chose not to release the music as an album of its own. Some of the tracks found their way into two other Mobley records: No Room For Squares (Blue Note 1963), and The Turnaround! (Blue Note 1965). Two additional tracks sat on a shelf collecting dust until after Mobley's death in 1986.

If someone put this band together today it would be billed as a super group. In the intervening fifty years, every player on the date has become a jazz legend in his own right, but in 1963 these were just working musicians. It wasn't even a performing unit, just a one-off group for the studio session. Trumpeter Donald Byrd joins Mobley in the front line. The rhythm section was comprised of Butch Warren on bass, who was playing with Thelonious Monk at the time, and drummer Philly Joe Jones who'd just departed Miles Davis' first great quintet. Rounding out the lineup is Herbie Hancock who, at a tender 22 years old, was just a month shy of joining Davis' second great quintet. The band never betrays its impermanence: the performance is flawlessly tight, as if staged by a regular working unit that had been playing the music night after night.

Mobley isn't necessarily remembered as a cutting-edge jazz innovator. Dexter Gordon is credited with admiringly calling him the "Middleweight Champion of the Tenor Saxophone," referring to his competence and poise. Compared with the two creative pillars of the time, Sonny Rollins and John Coltrane, Mobley mostly worked within the accepted language of hard bop, and there may not have been anyone with better mastery of that language. Where Rollins, and especially Coltrane worked at the outer limits of the music, often teetering over the edge of the cliff just barely hanging on, Mobley filled the music's inner framework with some of the most compelling, structurally solid compositions and improvisations of the era. He stayed away from excesses like free blowing or atonality, and his playing—while hot and emotive—has a certain architectural quality to it. His music is built on well-honed skill and intellectual deliberation.

Never far from the blues, the title-track is a mid-tempo 16-bar groove. Hancock drops a down-low stroll, echoing another Davis' alum, Red Garland. Byrd picks up the thread with brass liquidity. Mobley's turn is typically understated but perfectly executed. It wasn't his style to hit people over the head with his horn, but he was a masterful musician and his chops are on full display.

"Up A Step" embraces the modal concepts of Davis' Kind of Blue (Columbia, 1959). Hancock shows that he's clearly internalized Bill Evans' piano playing, and, not to be outdone, Mobley's own solo briefly echoes Coltrane's announcement on "So What." It would be fair to say that this track is an application of what was, at the time, one of the most innovative new directions in jazz; perhaps not ground breaking in its own right, but a well-played implementation of new concept.

Mobley was not generally known as a balladeer, so the inclusion of "The Good Life" was a little unusual. He conjures creamy, bourbon melancholy, full of emotive weight and poignancy from his tenor horn. Warren's bass adds big round drops of bottom heft in front of Hancock's slow, heavy chords. Mobley should have played a few more ballads. He was good at it.

"East of the Village" shows off Jones' diverse rhythmic capabilities. Latin syncopations in the melody give way to a straight ahead four-on-the-floor beat during the improvisations, and the transition between the two rhythms is seamless. The track is reminiscent of some of Horace Silver's Latin tinged compositions, perhaps echoing Mobley's time in the original lineup of the Jazz Messengers.

Taken as a single performance, The Feelin's Good works remarkably well. There is a consistency to the writing and playing that clearly reveals a single artistic vision captured in time. It's less a collection of songs than a recital of sympathetic compositions.

The Music Matters series has a track record of extraordinarily good sound quality within the limitations of fifty year-old recordings. In this case, the sound is exemplary even by the series' high standards. The piano does have the signature Van Gelder piano sound, sometimes described as wrapped in a blanket under water, but the effect is uncharacteristically minimized. Instead, the keys sound remarkably weighty and present with an unusually genuine sense of the instrument's scale. The horns are scary in-your-room realistic, and the drums and bass are palpable. Rudy Van Gelder is sometimes guilty of having had good recording days and bad recording days. The Feelin's Good was one of his best ever.

Over the years, all of the tracks on this record have been released in some form or other, but The Feelin's Good isn't a reissue so the packaging required a little extra work. There was no existing Reid Miles jacket, no liner notes, and the label had never assigned a title to the session. Blue Note's current management helped fill some of the gaps for this release. To start, The Feelin's Good finally has an official catalog number, BST-84401. Michael Cuscuna— among the label's most knowledgeable champions—wrote a set of long overdue liner notes, and Ron Rambach, the owner of Music Matters, created an aesthetically period-consistent sepia toned cover. Like all of the Music Matters releases, the jacket is a heavyweight gatefold with session photos filling the interior. It's a premium product and the artwork reflects that.

There is only one problem with The Feelin's Good: very few people will have the opportunity to hear it. To capture superior analog sound quality, the Music Matters series is released on vinyl only, so hearing The Feelin's Good requires a working turntable. This, and a small production run, all but ensures a very small pool of listeners. That might make sense for regular back-catalog reissues where other CD pressings are readily available, but not for the release of a new album. The Music Matters pressings are exceptional, but broader distribution on modern media formats would let everyone hear this record. Blue Note should do something smart: release this album on CD, maybe even throw it up on iTunes, then run a little marketing campaign to tell the world about it. It would be well received.

No one will ever know for sure why Alfred Lion cut this session up for filler, shelving the rest for decades. That decision seems unfathomable listening to it today. There are a lot of great Hank Mobley records, but The Feelin's Good vaults to the top of the list as one of his best. Mobley is at the top of his game here, surrounded by a who's who of top tier musicians. Buried treasure like this doesn't show up all that often, so when it does, people should pay attention. It really is that good.

The Feelin's Good; Up A Step; The Good Life; East Of The Village; Yes Indeed; Old World, New Imports.