Stan Getz: Getz At The Gate 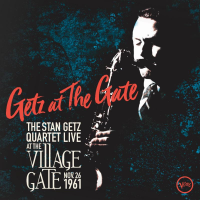 Connoisseurs of Stan Getz continue to get lucky with newly discovered live recordings. The last was Moments In Time (Resonance, 2016), a single CD documenting parts of a week-long residency with a quartet including pianist JoAnne Brackeen in San Francisco in 1976.

Getz At The Gate, recorded fifteen years earlier, is another substantial addition to Getz's catalogue. Over two CDs, or three LPs if you prefer, it includes all 139 minutes which Getz's band performed at New York's Village Gate on November 26, 1961. Recorded just a month after the completion of Getz's with-strings masterpiece Focus (Verve, 1961), the package captures him at the top of his game.

After two and a half years living in Denmark, Getz returned to the US in early 1961 to encounter a jazz world in the throes of change. Ornette Coleman was carrying the torch for free jazz, Miles Davis had brought modal jazz into the mainstream and John Coltrane had put clear water between himself and Sonny Rollins to become the pre-eminent tenor saxophonist on the New York scene.

Getz, who had lost none of his competitive edge while in Europe, realised he could not simply pick up where he had left off if he wanted to keep his place at the head table. He was not about to become either a modal or a free player, but he was prepared to recalibrate a little. He put together a new-guard quartet comprising pianist Steve Kuhn, who had briefly been a member of Coltrane's quartet in 1960, bassist Scott LaFaro, who had just left Coleman's band, and drummer Roy Haynes, with whom Getz had first worked in the late 1940s and who was fresh from recording with Eric Dolphy.

Getz took the group into the Village Vanguard in March 1961 for his New York comeback. A review in The New York Times reported that Getz was "a much more venturesome musician" than when he last played in the city. The quartet played an acclaimed set at the Newport Jazz Festival in July. Things were looking good. Tragically, four days later, La Faro was killed in an auto accident.

La Faro was replaced by John Neves and the new lineup—augmented by valve trombonist Bob Brookmeyer—went into the studio in September to make Recorded Fall 1961 (Verve), a relatively little-known treasure in Getz's discography. Two months later, Getz took the quartet (without Brookmeyer) into the Village Gate for the gig preserved on Getz At The Gate.

Despite their quality, Recorded Fall 1961, Focus and Getz At The Gate were all overtaken by events. In early 1962, the tapes of Getz's bossa nova debut, Jazz Samba (Verve, 1962), hit Verve's office. They had hit written all over them. Getz's other projects were put on hold. Recorded Fall 1961 and Focus dropped off the promo schedule and Getz At The Gate lay forgotten in the vaults. Only now, in June 2019, is the album getting its first release.

The Getz At The Gate set lists are mostly drawn from the Great American Songbook with which Getz had made his name, plus four jazz standards (Gigi Gryce's "Wildwood," Dizzy Gillespie's "Woody "n You," Thelonious Monk's "52nd Street Theme" and Sonny Rollins' "Airegin"). Getz's readings range from the lush and intimate through the fierce and stomping and, as ever, he pulls improvised melodies out of the air which are as beautiful as the tunes they are grounded in. A gorgeous reading of Harold Arlen's "When The Sun Comes Out" is among the highlights.

The odd-man-out among the track titles is "Impressions," the tune John Coltrane had remodelled out of Miles Davis' "So What" (from Davis' 1959 CBS album Kind Of Blue). It would be fascinating to hear Getz play Coltrane's piece but, disappointingly, he sits out the number, which is a trio feature for Kuhn, who had performed it while a member of Coltrane's band. On the rarities front, however, Getz At The Gate does include the only known Getz recordings of "52nd Street Theme," Cole Porter's "It's Alright With Me" and Dick Robertson's "Yesterday's Gardenias."

Getz At The Gate has borderline longueurs, in the shape of a couple too many bass solos. But such was the small-group gigging paradigm of the time. Getz is in exalted form throughout and you can't get too much of that.

CD1: Announcement by Chip Monck; It’s Alright With Me; Wildwood; When The Sun Comes Out; Impressions; Airegin; Like Someone In Love; Woody ’N You; Blues. CD2: Where Do You Go; Yesterday’s Gardenias; Stella By Starlight; It’s You Or No One; Spring Can Really Hang You Up The Most; 52nd Street Theme; Jumpin’ With Symphony Sid.