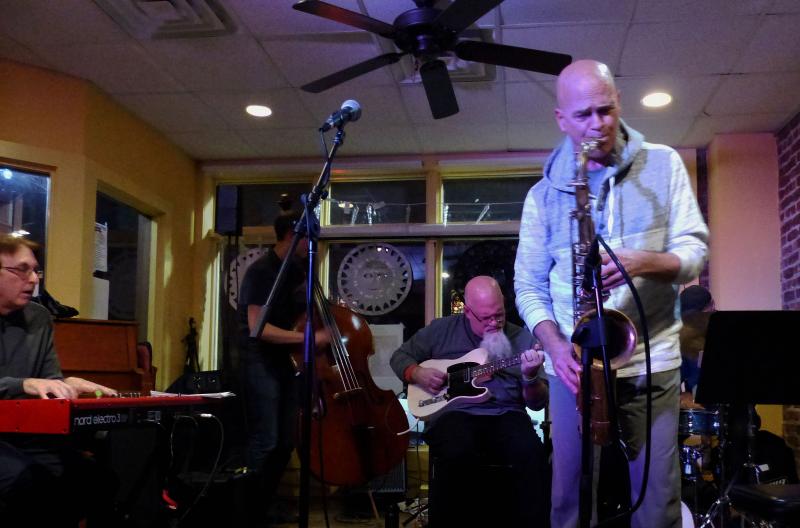 The Gerry Malkin Quintet is a quintessential, hard-working, New York area group that plays top-notch music, while going under-recognized in the competitive and crowded metropolitan marketplace. What is atypical of its session-savvy members are jazz pedigrees that run deep in the jazz hierarchy. The quintet brought their show to the popular BeanRunner Café in the Hudson River city of Peekskill, New York, just north of Manhattan. A combination of art gallery, performance space and eatery, the BeanRunner is a suburban variation of NYC's Jazz Gallery. Though it subsists in a small-city, boutique style setting with casual—but very good food—the music is the venue.

Leader and tenor saxophonist Gerry Malkin has performed with Tito Puente, Lew Soloff, Adam Nussbaum, George Colligan and Dave Weckl, to name a few. A graduate of the University of Bridgeport, he was mentored by Dave Liebman, Frank Foster and Bob Berg and is teacher himself. His early career had a strong Motown connection as he played with The Temptations and The Four Tops.

Guitarist Chris Morrison has performed with Richie Cole, John Patitucci and Brian Torff. With a Master's degree in Jazz Performance from the Conservatory of Music at SUNY Purchase, he also teaches jazz guitar and small group jazz at Western Connecticut State University. Keyboardist Jeff Pittson cites Chick Corea and Bill Evans among his influences. He has performed with Joe Henderson and Kenny Garrett and recorded with Maynard Ferguson. Portland, Oregon native and bassist Mike McGuirk has performed John Abercrombie, Dave Liebman and Tim Hagans and recorded on the Marc Copland/Liebman Quartet outing Lunar (Steeplechase, 2002). Rudy Petschauer sat in for regular drummer Bobby Leonard. A steady presence on the NYC jazz scene, Petschauer has played with Renee Rosnes, David "Fathead" Newman, Lou Donaldson and James Moody along with many others.

The group opened the set reaching back to the 1926 standard "Bye Bye Blackbird." Like all of the extended takes to come, Malkin's arrangements open with a loose adherence to the original shape of the composition. But this quintet is an improvisational powerhouse, and ten or so minutes in, they had unquestionably taken ownership of the piece. Antonio Carlos Jobim's "How Insensitive" (Insensatez) remained true to its bossa nova origins for only a few measures when Morrison's blistering guitar solo stood the piece on its head. Cedar Walton's "Cedar Blues" wasn't one of the pianist's most adventurous compositions, but in the hands of Malkin's quintet, it takes off. Opening as a collective effort, Morrison and Malkin broke off into solos and Petschauer took his first extended share of the spotlight and he rocked it for all it was worth. "Once in a While," made popular by the Roland Kirk Quartet with Elvin Jones on Rip, Rig & Panic (Limelight, 1965), featured Pittson's dirty blues opening before the quintet jumped in for a more raucous handling of the piece. The first set closed with a high-energy take on Sonny Rollins' "Oleo."

Included in the fiery second set were versions of "Alone Together" and Woody Shaw's "Beyond All Limits," the latter described by Malkin as a ..."power cha-cha...." It was on this piece that Malkin's deep, throaty tenor hit its high point of the night. Several more standards closed out the evening with the quintet never letting up on the energy level. Their extended techniques and unique hybrid of post-bop and straight-ahead jazz was always enhanced with a visceral punch. Malkin like to refer to his playing as being ..."in the tradition..." and that paints a far more structured picture than this first-class improvisational experience revealed.