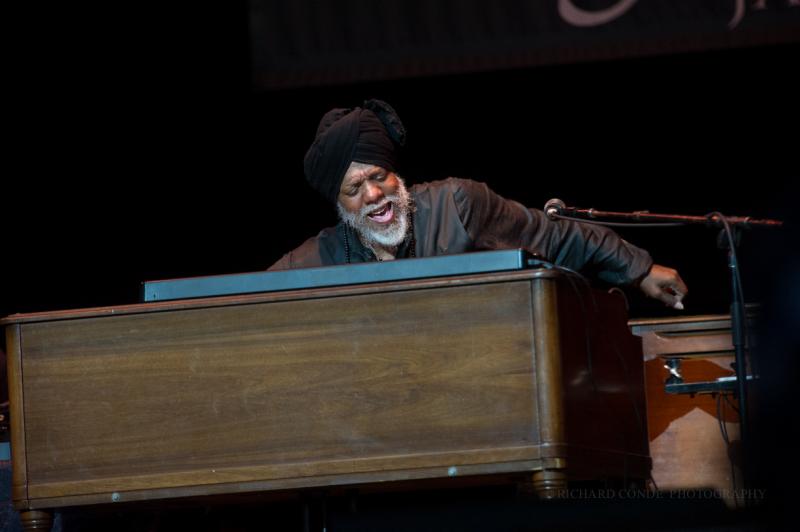 Perfect weather accented this years Freihofer's Saratoga Jazz Festival, an event that had an eclectic mix of young musicians with interesting ideas and approaches, and veterans who deliver consistently.

The weather is always a factor because it's primarily an outdoor festival for two days, on two stages, at the beautiful Saratoga Performing Arts Center. (There is some covered amphitheater seating). But the most important ingredient, naturally, is what the array of artists bring to the table. Those assembled this year by producer Danny Melnick were largely outstanding. "Something for everyone" might be a cliche, and might even turn some purists off. But for such an event—and the Saratoga festival is known as one great big picnic where friends/music lovers gather, dubbed by festival organizers as "The Hang"—it's not a bad thing at all. There was enough great music, and a "draw" band, this year Earth, Wind & Fire, that thrilled other people with their high-energy approach to pop and soul.

A combination feel-good and intensity came in the form the octet fronted by Dr. Lonnie Smith, the 72-yer old who has been grooving hard for decades and putting smiles on people's faces. He played several tunes from his earlier work, the soul jazz that landed him gigs with Lou Donaldson and George Benson, as well as launched his own hot recording career with Blue Note and other labels. Smith's unique (self taught) approach to the Hammond B3 is both sweet and fiery. He also gave plenty of solo space for the horns, who included the fine John Ellis on tenor sax. Ed Cherry's guitar work was key to the rhythm of the whole set as much as his occasional solo was to the tunes.

For the inquisitive looking for new things, no one could have been less than enthralled with drummer Jaimeo Brown's Transcendence trio. Brown's improvisational style takes jazz to exciting places with dense rhythm and themes that segue seamlessly from serene to raucous, to music that comes from the work fields down south from days gone by. It all came fro the drummer's Transcendence album (Motema Music, 2013), inspired by a the rural town of Gee's Bend, Alabama, formed in the early 1800s. The intensity of the set kept the listener on edge, waiting for what's next, aided by the searching, soulful, Coltrane-inspired saxophonist JD Allen, and the tasty and provocative guitarist Chris Sholar, who has produced music with Beyonce, Mos Def, Q-Tip, Mariah Carey and others. The music was captivating. Brown is a talented drummer with much to say, and any day the constantly creative Allen can be heard is a good day.

Pianist Marc Cary's Focus trio was also superb. Cary has a great approach: plenty of chops, but not for chops sakes. His melodies allow his band—drummer Sameer Gupta and bassist Rashaan Carter—to hold the groove, but also strike out on adventure, melodically or rhythmically. The music was evocative of a big city and its many moods. The interaction among the musicians was that which can be attained only by consistently working together. Cary could be percussive and contemplative. Every direction he took held interest. They told great stories.

Saxophonist Melissa Aldana sprang to fame after winning the Thelonious Monk International Saxophone Competition this year, the first female and South American (Chile) to do so. Fresh off the release of her new Concord Records CD Melissa Aldana & Crash Trio, she displayed why her reputation is growing. The trio on the record was the same one she has been touring with for many months, refining and growing the music. They are already in the throes of making a second record as a group. Aldana, from a family of saxophonists, has a warm tone and doesn't feel she has to be the fastest gun in the west. She develops harmonic and melodic ideas with her solid Crash mates Francisco Mela on drums and Pablo Menares on bass. She develops ideas then thoughtfully pursues the possibilities. Most of the tunes were originals. They also performed "Perdon" by Menares and Monk's "Ask Me Now," the latter a gem of an interpretation.

Blues music was well represented in the form of two fine guitarists, one an inspiring veteran who seems incapable of playing a bad note; the other a new voice on the scene with fast hands, a scintillating sound and the look of one who will one day be a standard bearer.

Ronnie Earl lives in a world where blues meets jazz. Over the strong support of organ, bass and drums, he plays in a style that is ethereal and floating, taking the listener on a journey that features melodic twists and turns. He also can make the instrument sing with a plaintiff cry, part anguish and part glee, as he did on the ballad "Miracle." He's an unsung guitar hero with his own voice, constantly playing flowing lines, using space, and playing notes that are heartfelt. Sublime. From the opening strains of Bobby Timmons' chestnut "Moanin,' he had the crowd in tow.

Quinn Sullivan is a 15-year-old who has been playing with legend Buddy Guy for a few years, including last year's Freihofer festival. This year, he played with even more force with his own band on tunes of his own device, "She Gets Me" and "My Sweet Guitar," as well as classics like "Little Wing." At times he brought to memory Stevie Ray Vaughan through his playing (his voice, while pleasant, is still too youthful). The band also featured the hot bluesman Bruce Katz on keyboards, a veteran who has plated with the likes of Delbert McClinton, Duke Robillard, Joe Louis Walker, John Hammond, the Gregg Allman Band and the Allman Brothers Band. He added great spice to the mix, fleet and funky.

Dave Holland's band Prism smoked the SPAC grounds with some of the most rock-influenced music the bassist has played perhaps since his time with the electric Miles Davis bands a few decades ago. Since braking out of "The Tonight Show with Jay Leno" cocoon, guitarist Kevin Eubanks has emerged as a guitar slinger to be reckoned with. His raw, searing flights cut through the air with an amalgam of intense emotion and supreme commend of his axe. It fit perfectly with the multiple rhythms laid down by one of today's modern master drummers, Eric Harland. Craig Taborn's keyboard work was up to task of exploring the fusion sonorities. Of course Holland remains one of the all-time greats on his instrument. The music, including the leader's "The Winding Way" and Eubanks' "Evolution," sizzled.

Guitarist Mike Stern, also equally at home in blues, rock or jazz, teamed with saxophonist Bill Evans for fusion of a different sort. This band leaned more toward funk as a backdrop for the two fine soloists who first played together in the early 1980s Miles Davis band. Both players smoked, but it was more a matter of muscle flexing over simpler motifs, and not great interplay over well-crafted tunes. Still, fun music for a day out in the summer sun.

Mainstream jazz was in fine hands from generations of hot players. Terence Blanchard's quintet is one of the supremely smoking units on the scene. His playing is as athletic and strong as any, his horn blasting out as if from the mountaintop. And the band follows in similar fashion. Up-tempo numbers burned down the cornfields and ballads were deft and touching. Much Blanchard's elder, 74-year-old Lew Tabackin played with just bass and drums. In the line of great tenors from Coleman Hawkins through Sonny Rollins and down. Backed by bass and drums, he blew beautiful tenor sax over the changes of the standard jazz repertoire and a couple originals. His flute playing is still dazzling.

The Newport at 60 band, assembled all-stars celebrating the 60th anniversary of the festival this year, also showed burning bebop is alive and well. Driven by the drums of Clarence Penn and bass of Larry Grenadier, the band cooked throughout, Randy Brecker got to flex his trumpet chops on "Free Fall." Anat Cohen's saxophone was strong and on clarinet she blew to the skies on "La Vie en Rose." Singer Karrin Allyson was blissful on "Can't We Be Friends." and elegant in a duet with Grenadier on "'Round Midnight."

Sean Jones, trumpeter extraordinaire, led a great set of joyous jazz that ended with the "Don't Give a Damn Blues." His blaring solos always had both strength and taste. A fantastic player.