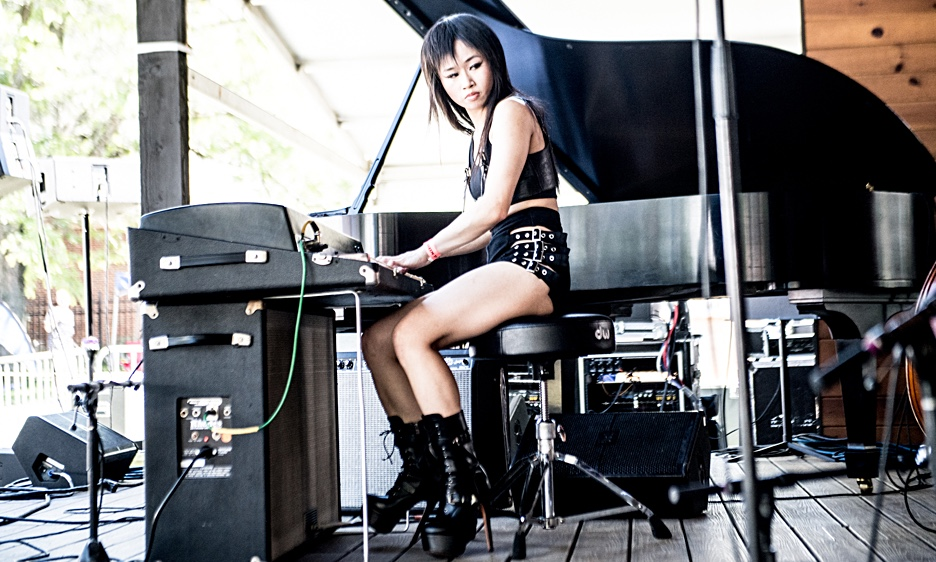 From the opening strains of the Dan Wilson Trio's first song, late Saturday morning at Freihofer's Saratoga Jazz Festival, there was a vibe set. The music was bliss. Not just because of its quality (though it certainly was fine) but because it signaled the return—the real return—of the festival to its old format. The sun shone and so did the faces of the people.

The 45th edition was an artistic success, with continuously outstanding music played with élan by musicians of superior caliber. Part of the special quality had to do with COVID's grasp being loosened. In 2020, the event was reduced to an online presence, the caliber of which was lacking. Last year's socially distanced and vastly curtailed festival gave more hope. This year, 13 bands on two stages on Saturday; 11 bands on two stages Sunday. And the resumption of one of the world's best picnic atmospheres, dubbed by its organizers as "the hang."

Producer Danny Melnick of Absolutely Live Entertainment had a task ahead of him to jump start the Saratoga classic. He chose the lineup well. Comments from the attendees universally praised the 2022 edition.

Artists included well known figures like Eliane Elias, Wynton Marsalis, Robert Glasper and Kurt Elling. There were terrific Latin bands like Tiempo Libre and Con Tumbaro, as well as soulful singers including Ledisi, Emmaline and Dara Starr Tucker. There were exciting crossover bands like Red Baraat, Cha Wa and Galactic. Even Booker T., a stalwart of the Memphis r&b hit-making company Stax Records, appeared to take listeners on a tour of some of those songs of old.

The bands were divided between SPAC's main amphitheater stage, and the Charles R. Wood "Jazz Discovery" Stage toward the rear of the grounds, where its open, more accessible layout is more intimate.

Guitarist Wilson on that back stage was smooth as silk with a dexterity in debt to George Benson. He layered his sound over an organ trio composed of Pat Bianchi, who spent some years stoking the Hammond B3 behind the iconic Pat Martino and drummer Donald Edwards. In introducing Bianchi, Wilson quipped the organist "isn't going for any of my guitar tricks" because with Martino, "he's seen them all and much more." The group was swinging and soothing at the same time, playing John Coltrane's "Pursuance," Herbie Hancock's "Tell Me a Bedtime Story," Wayne Shorter's "Children of the Night" and Wilson's own "Who Shot John?"

If there was any chance of a lull, pianist Connie Han and her trio put that to rest. The Los Angeles native is starting to make big waves and her piano ranged from intense, to thoughtful. But mostly intense. Uniquely attired, she attacked the keyboard from the jump with songs she said were inspired by tales of ancient goddesses, as well as drummer Bill Wysacke's "Captain's Song" and her own "Mr. Dominant." An impressive, chops-bending stomp was "For the O.G.," that she composed as a tribute to her hero McCoy Tyner, whom she described as the "original gangster" of jazz piano. Snippets of Tyner's "Fly With the Wind" could be heard.

Keeping going at a super high level was saxophonist Craig Handy and his 2nd Line Smith band, also propelled by organ, this time Kyle Koehler. Handy is a burning saxman who has payed with Art Blakey, Roy Haynes and the Mingus Dynasty among so many more. But this version of his band combines the music of organ legend Jimmy Smith with the musical funk of a New Orleans second-line funeral march. "Organ Grinder's Swing" and other Smith tunes were highlights, but all went wild when they blasted the Lou Rawls hit "You'll Never Find Another Love Like Mind"" and Handy stepped off the back stage and slowly strolled through the audience, honking and screaming on the tenor sax to the delight of all. As hot as the 90-degree weather.

Sultry chanteuse Emmaline brought the heat down, but not the interest level. She showed a fine voice over a tight band. The set included standards— arranged to suit her youthful outlook and modern approach—like "I'm in the Mood for Love" and "You Don't Know What Love Is," but also sparkling originals and even M.C. Hammer's "You Can't Touch This." Her occasional violin playing was remarkable. It was a strong set from a woman with a successful future lying ahead.

On the main stage pianist/composer Glasper had technical problems that frustrated him at times, but he soldiered through with some humor. With a DJ, bassist and drummer Marcus Gilmore, he tried to showcase his brand of funk and R&B featured on his series of Black Radio recordings. There were some moments of cool, hip vibes, but there was a sameness to much of it and it seemed stagnant. The vocoder electronic vocal effects also lost their luster. There was a head-nodding quality to some of it. There's no question he can play the piano and his musical journey is still ahead of him. He'll be moving forward, not backward.

The Ozmosyz band, featuring keyboardist Rachel Z and drummer Omar Hakim had its moments of ethereal bliss and maybe too spacey moments. The pianist is a fine writer and her dexterity across as many as three different keyboards was superb. It had a complex density at times and then a release of tension. Hakim is a fine drummer whose work often seems effortless. They were a good tandem, this time with guitar and bass

Con Tumbao, a nine-piece all-star Latin group, brought the energy and the groove back. It was led by Isaac Delgado, but many band members contributed vocals and solos came from all across the stage, bass, percussion, horns, keys. Bassist Oscar Hernandez, with his impossibly long braided ponytail, played intricate line that impressed. Robby Ameen and Pedrito Martinez handled the rhythms so vital to the music with typical flair and trumpeter Mike Rodriguez stood out in the powerful horn section.

On Sunday, Ryan Keberle's Catharsis band gave the day a good start, performing mostly originals, including a Keberle suite. Nicole Zuraitis provided vocals—sometimes wordless, sometimes with lyrics—and the versatile Scott Robinson was also on the stage. He actually played only trumpet and tenor sax, which is a lot less than he sometimes plays with the Maria Schneider Orchestra. "If anyone out there has an instrument, bring it up and he'll play it," quipped Keberle. Keberle's trombone was exquisite, as usual, strong of tone and with technique to spare. Dylan's re-arranged "The Time They Are a Changin'" was a somber ballad done with grace.

Tiempo Libre, a group comprised mostly of Cuban natives (now mostly based in Miami), took the stage by storm. They did what might have seemed impossible. They got a great many people up and dancing at a time when the weather temperature was around 92 degrees. The music temperature was 120. The energy and musicianship are super high when this band plays, directed by keyboardist/writer/arranger Jorge Gomez. He directs the show. Not physically. But most of the music is written and composed by him, and the staging, pace and presentation come from the leader.

Selections included some familiar songs like Tito Puente's popular "Oye Como Va" and " Guantanamera," but done in their own way. There's even a segment of "Tutu" (Marcus Miller's tune that became a signature Miles Davis number for the last years of his life) that bridged one song to another. Especially cool was music from Bach in Havana, the band's 2009 album that garnered one of the band's three Grammy nominations.

A bit of a surprise was the unheralded Matthew Whitaker, a prodigious talent who played all the keyboards—organ, piano, electric piano—with equal aplomb at the head of a strong quintet. They played hard jazz, blues, funk, and stuff in between and it was cool to see this young man take on selections as broad as Chick Corea's "Spain," Brubeck's "Blue Rondo a La Turk," Marvin Gaye's "What's Goin' On," Lonnie Smith's "Pilgrimage" and other fine music. Each was done with passion. Great vibes and a great set of music.

Other great music came from Elias, Elling and Marsalis as the afternoon and evening closed.

Elias took a lot of music from her home country this time around, though she is a fabulous straight-ahead jazz pianist. "So Danco Samba," "Desafinado," "Aquarella Do Brasil" and others were presented with her alluring, sensual voice that caresses the listener while the musicians—bassist Marc Johnson, drummer Tiago Michelin and guitarist Leandro Pellegrino—create rich backgrounds that are both intense and lyrical. She is always a highlight and is again touring the world after a mishap that took her out of commission for a while.

Elling played his SuperBlue project and music from the recording of the same name that features the extraordinary Charlie Hunter on guitar. There were also three horns that enlivened the music even more. With all the jazz Elling sings—changing intervals, unexpected turns of a phase, long horn-like tones and great improvisation—he still carries strong elements and groove and down-home soul. His recitation of the lyric carries a conversational and direct quality despite the complexity. The moments when Hunter played were a delight, as he effortlessly weaves melody and harmony into statements felt as well as heard.

The music was mostly original. "Sassy," a nod to Sarah Vaughan, was especially nice as was "manic Panic" and "SuperBlue."

The Lincoln Center Jazz Orchestra set didn't break form. Great songs from great composers, played by expert musicians in the band. Arrangements of those charts also came from within the band. Monk, Mingus (a strong version of "Freedom") and Ellington were among those artists whose music blared out across the SPAC grounds. Marsalis himself blew his best on a Clifford Brown classic.

His band closed a festival that spread a spirit of revitalization over SPAC, its audience, and the musicians, all of whom were glad to be back full force, with the full spirit of the great festival whose origins go back to 1978. 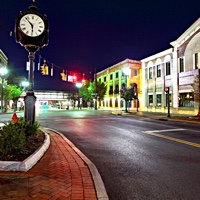