By R.J. DELUKE
July 9, 2010
Sign in to view read count
2010 Freihofer's Jazz Festival
Saratoga Springs, NY
June 26-27, 2010
Watching Kendrick Scott's Oracle band in the warmth and sunshine of the Saratoga Performing Arts Center recently brought into focus everything that's good about the two-day event created by legendary impresario George Wein in 1978 and carried on more than capably by Danny Melnick's Absolutely Live production group (in conjunction with SPAC) since 2007.

The event, held June 26-27 in Saratoga Springs, NY, features bands on two stages—a large amphitheater stage and a smaller, more intimate, gazebo stage toward the rear of the grounds. It's also the picnic of the year, with fans draping the spacious and splendid SPAC grounds with blankets, coolers and an assortment of accoutrements to augment their socializing and music-listening experience. The gazebo stage, is often (though not always, over the years) for musicians who are not yet of "big name" status. And it never fails to come through. It also covers up for occasional failings on the main stage.

The 2010 version, though not spectacular, weak in areas of the lineup, was still strong and provided many moments of fine music. It always does. 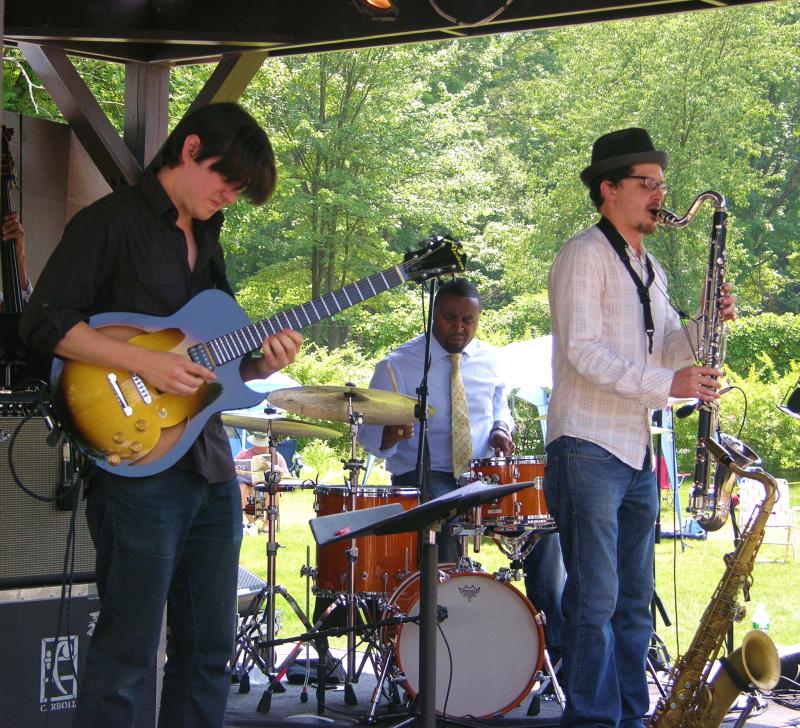 As he showed on his first Oracle album The Source (World Culture Music, 2007), Scott's set was a joy. He's a superbly musical drummer who creates cushions of rhythm as soft and subtle as can be or as furious and thundering as needed. His musical palette is wide and sets a magic carpet on which his musicians can ride. And what musicians! An array of some of the finest young players on the New York City scene: Taylor Eigsti on piano, Mike Moreno on guitar, John Ellis on sax and bass clarinet and Harish Ragavan on bass.

They played selections like "Mantra" from the last album, but also a yet-to-be named selection the drummer has written. He's composing—a strong suit for Scott—for a second Oracle album and hopes to be recording later this year. Ellis continues to display sure and imaginative chops and did so on both bass clarinet and sax. Moreno is slick and dexterous on guitar and Eigsti is always supple and inspired. Scott , a Houston native sporting a cowboy hat prior to his set, was excited beforehand about his first road gig for the band. He didn't disappoint. One of the best sets of the festival. Also superb was the JD Allen trio, octogenarian Ahmad Jamal, the Trio of Oz that featured Rachel Z. on piano and Omar Hakim on drums, and Ralph Lalama's quartet.

Bands led by youngsters Hailey Niswanger, Linda May Han Oh, and Mario Abney shined brightly. Taj Mahal laid some wicked and wonderful blues on the proceedings. And there was much more, from trumpeter Tomasz Stanko to Al Di Meola and his Sinfonia band, Stefon Harris and Blackout, Al Jarreau with George Duke and fine Latin jazz from Steve Kroon's sextet. 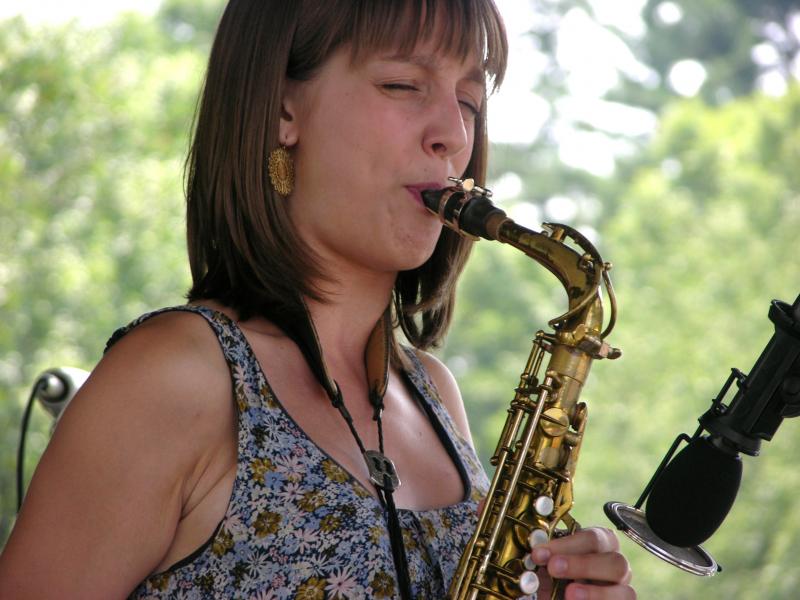 Niswanger, still a student at Berklee School of Music, came out with a strong set, showing strong chops on her alto sax with a fine feel for swing and nice approach to improvisation. In addition to her own compositions, she did numbers by John Coltrane ("Like Sonny), Thelonious Monk ("Reflection"), and even Ornette Coleman ("When Will the Blues Leave"). She was impressive. Young bassist Oh came with a trio, only trumpet and drums joining her, but it was enough. With strong technique and a full sound, she romped through an inspired set that included a number by rock band Red Hot Chili Pepper's, "Soul To Squeeze."

Speaking of songs by rock bands, Trio of Oz did a number of those, but molding them into great improvisational jazz, propelled by Hakim, who was a wizard on drums, fast and freakishly adroit. Great stuff. Rachel Z's playing is also invigorating and fiery, and great support was provided by Maeve Royce on bass. This group was alive with energy and passion, playing on both stages during Sunday's program. They brought life to "King of Pain" by the Police; "Angry Chair," by Alice in Chains; and "Sour Girl," by Stone Temple Pilots, among others. Wayne Shorter's "ESP" was also delivered with a splendid interpretation.

Ralph Lalama's music came from the standard repertoire and his latest CD The Audience (Mighty Quinn, 2010). His full tenor sax come out of the tradition of the greats. He's got a little of a lot of people in there, and the veteran comes across with a great, buoyant feeling and interesting twists and turns or phrases and feelings. Backed by other solid vets—drummer Joe Corsello, bassist Rick Petrone and guitarist John Hart—they provided great mainstream jazz. The old Sonny Rollins vehicle "I'm an Old Cowhand" was festive and Lalama's "Nonchalant" was particularly cool.

Also among the youngsters was trumpeter Abney, a player out of the Midwest through New Orleans. He and his young firebrands have a modern, high-energy style and they created good times for the appreciative crowd at both stages. Still developing as a player, he's exuberant, and humble, and it will be worth watching him grow. "Rollin'" got the body moving and the ballad "Ora, Sweet Ora," showed a soft side played with a nice round tone. Kaliq Woods on clarinet and Julian Addison on drums deserve a nod as well, sparkling on their respective instruments. 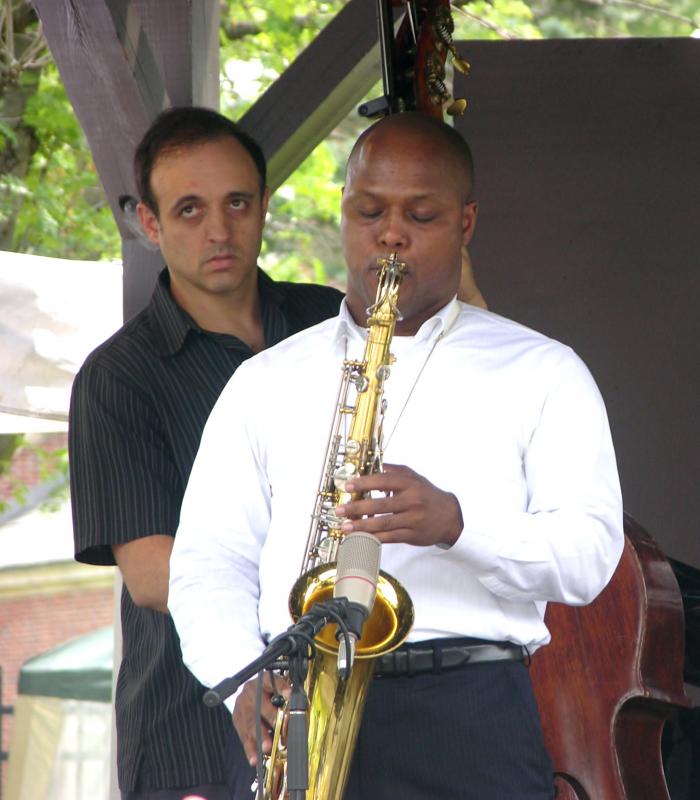 J.D. Allen is one of New York City's hot players. His own trio was outstanding—experimental and searching, as well as playing sounds for the heart. He's got a great sound on tenor sax and influences from Coltrane to Rollins and more. "The Cross and the Crescent Sickle" had a Traneish feel that Allen carried out with innovative beauty. The warhorse "Stardust" was rendered simply, but with a great tone and feeling. An excellent talent. Stanko's band played mostly from his new CD Dark Eyes. The ECM artist played mostly over an airy, ethereal background typical of that record label, but with a smoldering tone and a deft way of investigating and coloring the music.

Of the more well-known acts, Jamal was typically cool, hip, funky and swinging. A classy set from a class act and superb musician. Di Meola's group is known for it's world music style. A lot of it was acoustic, and Di Meola played with dexterity and chops that astound. Burt as if to remind people he's still one of the major guitar slingers on electric, he wailed over the Beatles' "Strawberry Fields" with a biting tone and searing approach. Vibes master Stefon Harris hit with his young band and exemplified how he blends funk and hip-hop and other modern sounds with jazz, including "Gone," a hip version of "My Man's Gone Now" out of "Porgy and Bess." The group is tight, for sure.

Taj Mahal burned up the blues, playing sharp and stabbing blues guitar over just bass and drums. His vocals are also terrific, as he rumbled, rattled and groaned through tunes like "TV Mama," "Done Change My Way of Living" and "Mississippi Big Butt Blues." First-rate blues with flare.

Clarinetist Evan Christopher out of New Orleans had nice chops and played music much-influenced by the Crescent City, an old-time swing feel with some sweet soloing. "Dear Old Southland" and Buddy Bolden's Blues" are an example of his fare. Ann Hampton Calloway's set was cabaret-like, as usual, but with a nice jazz trio anchored by the wonderful bass-drum tandem of the Washington, peter and Kenny, respectively (no relation). She did a lot of jazz standards with an engaging style. At one point she imitated some of the jazz greats like Billie Holiday and Sarah Vaughan, among others. What could have bee schlock was not. She was dead-on with those mini-tributes.

Latin Jazz was represented by Kroon, a conga player with an accomplished sextet that went through a variety of original songs with fervor. They had a great sound at the gazebo stage. At the main stage, the Afro-Cuban All-Stars of Juan de Marcos Gonzalez had the crowd dancing with high-voltage horns and percussion. Fun music that fit the fun atmosphere of the event.

And fun is a key word of the Freihofer experience. It's a rare place where festival-goers can fully cut loose and enjoy a special ambiance of a time-tested event, meet old friends, make new ones, and fine superior music.