By Ian Patterson
June 30, 2015
Sign in to view read count
A new Francesca Han recording is something to get excited about. The pianist's spirited trio/quartet outing Illusion (Audioguy Records, 2012) and the bewitching solo effort Ascetic (Audioguy Records, 2012)—one of the finest solo piano jazz albums of recent years—were outstanding examples of her skills as a composer, bandleader and improviser. Now, in a relatively short space of time, three more releases of quite distinct individual character have seen the light of day, confirming, as if there was ever any doubt, the Korean's elevated artistry. 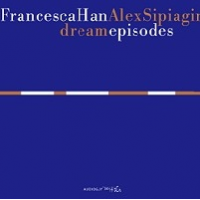 Recorded live and in the studio, Dream Episodes pairs Han with trumpeter Alex Sipiagin on an intimate duo reading of mostly standards. Spiagin appeared on Michael Brecker's Wide Angels (Verve Music Group, 2003) and toured in the late saxophonist's sextet. He's also sat in all the Charles Mingus repertory bands as well as Dave Holland's ensembles large and small. Needless to say, his playing sparkles here. Han provides limber accompaniment to the Spiagin's melodic improvisations and displays dazzling technique and notable lyricism of her own.

Bill Evans's "Orbit (Unless it's You") might seem like the most obvious reference to his influence on Han but in fact it's her elegant comping—narratives unto themselves—, particularly on "I Can't Get Started Without You," that's most evocative of Evans. On the latter, Spiagin's strongly sculpted melodic lines contrast with Han's softly lyrical punctuations. Spiagin's has an impressive discography as leader and his two originals, "Steppin Zone" and "Videlles" are vehicles for some of the most exploratory soloing from both musicians. Han's agile comping helps frame Spiagin's improvisations though her own solos are entirely unaccompanied.

Spiagin's caressing muted trumpet colors Antonio Carlos Jobim's "Luiza," though Han shares equal protagonism, so tightly interwoven are her lines with the trumpeter's. Elsewhere, the duo blow off some impressive steam on Sonny Rollins "Tenor Madness" and engage in warm, intimate dialog on a memorable version of "My Funny Valentine." On the latter, Vadim Neselovskyi—a member of Gary Burton's Next Generation Quintet—guests on melodica, his soulful contribution adding texture and harmonic depth to the mix.

Han and Spiagin give virtuoso displays, but they are highly attuned to the needs of the tunes and to each other's space, resulting in a richly rewarding listening experience. 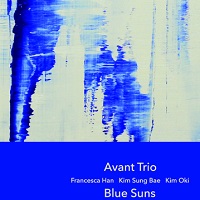 Francesca Han is an accomplished composer and an absorbing improviser. This trio outing, alongside double bassist Kim Sung Bae and saxophonist Kim Oki, falls between the two stools, with half the tunes composed and half born of collective improvisations. Like Dream Episodes, the music was recorded over just two days and a vitality courses through these three-way dialogs that meet at the juncture between free jazz and blues-based groove.

Most satisfying are the longer tracks where the trio's vocabulary stews slowly, like the folksy, lullaby-esque "Little White Stone"—featuring lovely piano and bass unison lines—and the elegant "East Sun"—a seductively soulful trio improvisation. There's sharp contrast between Kim Oki's squealing saxophone and the slow blues groove that Han and Kim Sung Bae pile on "The Loudest Silence." All three musicians are on the same wavelength on "Tembo Steps"-a tuneful, rhythmically well-defined composition that sees Han and Kim Oki in scintillating from. Han's "Dadam," built on circular motifs, has the infectious energy of a tight-but-loose jam.

On Blue SunsThe Avant Trio strikes a fine balance between form and freedom, though even when the reins are at their loosest there's a celebratory feel about the music. An impressive collaborative effort. 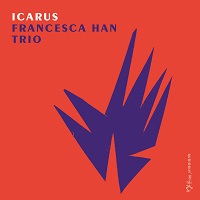 For Han's third trio recording of her career she teams up with bassist Sunyong Lee and drummer Dongjin Shin to deliver a dynamic set of originals that show an evolution from her previous works. Perhaps there's less classical influence and a touch more blues in her fingers than before but regardless, Icarus is a significant addition to Han's discography.

There's tremendous light and shade in Han's playing. Her range of dynamics on "Study 37" calls to mind Ahmad Jamal, as feathery impressionism gives way to striking melodicism and repeated motifs slide into scurrying runs as the rhythmic intensity undulates. Han, however, is more at home with excursions into abstract terrain than Jamal and a little dissonance is the other side of the coin to her melodic vocabulary. Lee and Shin are intuitive partners throughout; whether in high-tempo, high-intensity free-form flight or whether providing sympathetic support to Han's more delicate explorations, as on the charming "Beneficial," their intuitive rhythms inform the music considerably.

Han's arresting two-handed technique is heard to good effect on the evolving narrative of "Count Yourself," where tightly coiled trio patterns are juxtaposed against tumbling release. There's greater uninhibited flow to the punchy "Rotten Peanuts," sombre baroque grandeur on "Detour" and a swinging groove on the thrilling, up-tempo workout "Far East." The minimalist ballad "Lost Moon" reveals the power of fewer notes and provides an album highlight.

Han pays tribute to her former teacher Jason Moran on "Moranism. Here, patient construction gradually blurs the line between composed and improvised as Han gathers wind her sail, though Shin has the final word with a fluid drum feature over Han's vamp. The episodic "Notoriety" toggles between slow, gospel-blues-tinged funk and free-flowing passages, revealing once again not just the range of Han's palette, but her ability to fuse diverse idioms. The elegant, animated "One Whole" rounds out the set; Han's two-handed dialog, Lee's measured contrapuntal lines and Shin's inventive accents combine to forge a compelling tale.

The bold definition of Han's compositions and the rhythmic and melodic twists and turns allow plenty of room for individual and collective improvisation. Hopefully this trio will continue its journey, as its intuitive, risk-taking spirit—within clear parameters—renders sparkling, exhilarating music.

Tracks: Orbit (Unless It's You); Steppin' Zone; Luiza; Videlles; I Can't Get Started Without You; Tenor Madness; My Funny Valentine.