By J Hunter
February 17, 2010
Sign in to view read count
In many ways, the description "Latin jazz" is no more useful than the umbrella description "jazz." There are sub-genres inside the sub-genre, all of them with subtle color changes that provide different flavors, even though it all can lead to the same satisfying result. Here are three early 2010 entrants into this musical conversation. 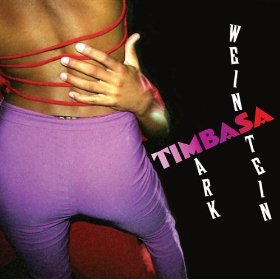 Back in the day, people going to their first Grateful Dead show were given this advice: "If you get bored, just watch the drums." The spirit of that advice is applicable to flautist Mark Weinstein's latest CD. Not that Timbasa is boring, far from it—if anything, this should be counted as the first great jazz party disc of 2010. But as great as Weinstein is here, his percussion section's overall performance is off the charts.

On balance, "Milestones" is one of the more conservative pieces in trumpeter Miles Davis' catalog. But put Cuban percussion masters like drummer Mauricio Herrera, conguero/co-producer Pedrito Martinez and bongo master Ogduardo Diaz behind this disc-opener, and things get tribal in a big hurry. Weinstein's lines are absolutely thrilling as the piece builds momentum, and even though the group pulls back for Axel Tosca Laugart's piano solo, the piece's edge stays extremely sharp.

Weinstein may not have the accuracy of Dave Valentin or Herbie Mann, but he more than makes up for that with a relentless passion that runs through every piece on Timbasa. He stuffs Wayne Shorter's "Footprints" into a 7/4 time signature and makes it work, albeit with a terrific assist from Laugart. Herbie Hancock's "Watermelon Man" doesn't have to be stuffed, because it lends itself perfectly to the disc's Cuban vibe, as does the Duke Ellington/Juan Tizol collaboration "Caravan" and Chucho Valdes' calypso-on-steroids rave-up "A Ernesto."

It's not all covers, though. Weinstein's "Just Another Guajira" offers sweethearts everywhere a chance to step onto the floor and let it all hang out. In addition to Martinez' stellar work on congas, he contributes a title track that lets Herrera truly go to town, and Weinstein positively wails on Martinez' second offering "Encuentro."

While it's good that jazz can be the most cerebral music around, it's also a good thing to turn the mind off and let the mojo run things for a while. Timbasa is a satisfying reminder that sunshine, sandy beaches and Mojitos are on the other side of the snowstorms of winter.

Visit Mark Weinstein on the web. 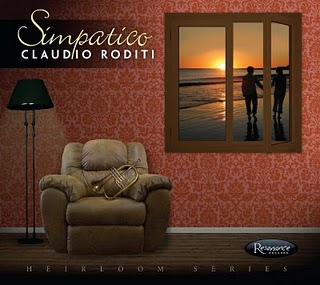 Horn player Claudio Roditi's Grammy-winning disc Brazilliance x 4 (Resonance, 2009) was built around classic compositions by Joao Donato, Durval Ferreira, and Johnny Alf. For Simpatico, Roditi pulled out his pen and created his own set of samba, bossa and blues tunes. And while the overall product is eminently acceptable, one issue keeps a good disc from becoming a great disc.

Roditi sets the tone immediately on "Spring Samba" by launching the enticing melody from the first note. The harmony created by Roditi's flugelhorn and Michael Dease's trombone creates a "double mute" effect, as the instruments' respective tones mesh into one soft sound. Helio Alves' piano has some serious jump to it, as does Dease's separate solo, and Duduka Da Fonseca's percussive efforts work busily underneath the proceedings. All told, the piece is perfect for kicking back and watching the sun go over the yardarm.

Roditi also creates some cool shout-outs to the ones he loves: "A Dream for Kirsten" is a beautiful bossa ballad for his wife, and the celebratory "Albert and Daisy" is Roditi's thank-you to his parents for all they instilled in him. "Alfitude" is a passionate tribute to Johnny Alf (who Roditi says "influenced every composer that came after him"), and "How Intensive" is a courteous nod to Antonio Carlos Jobim's "How Insensitive." Romero Lubambo's silky acoustic guitar floats down the picturesque path Charlie Byrd—and Jobim himself—blazed before him, and the lush strings on "Slow Fire" recall the mellow tones of Jobim's own recordings.

And there's the issue that hinders Simpatico: Things are too relaxed. Admittedly that's the traditional path forged by Jobim and, subsequently, Byrd and tenor saxophonist Stan Getz. But with so many players trying to bring Latin jazz into the 21st century, Roditi is respectful to a fault. His best moments come when he's forced to work outside his comfort zone: the construction of the piccolo trumpet requires Roditi to blow like blazes on "Piccolo Blues," and Dease's solo on "Blues for Ronni" requires nothing less than an inspired response. Alves' piano is consistently bright and interesting on every piece, but at the end of the day, he's not the leader. Simpatico is an enjoyable experience on many levels, but it falls several steps short of the next level.

Visit Claudio Roditi on the web.

Don't ask pianist Emilio Solla what "tango jazz" is, because he admits he has no idea. For one thing, Solla's liner notes for Bien Sur! breaks down the many ways players like Pablo Aslan, Gustavo Bergalli and Fernando Otero are breaking tango out of its 20th century bag. For another, Solla says his music is closer to folklore, which is the folk music of northern Argentina. Either way, there is one term that can be applied to the contents of Bien Sur!: Amazing!

If drummer/percussionist Richie Barshay's opening rhythm on "Remain Alert" isn't enough of an attention-getter, the shrill Galican bagpipe solo that follows will definitely make heads swivel (and, possibly, swell). It's a primitive sound that would force saxophonist Albert Ayler to run for cover, and it makes Chris Cheek's soprano sax sound positively mellow. Uncharacteristically, the bagpipe is not a deal-breaker; if anything, it adds urgency to the accompanying question, "What have we here?" The piece has the unrelenting energy of horsemen galloping through the night, and Solla's counter to Cheek's solo does some cantering of its own. While Victor Prieto's accordion has an old school sound, his solo contains noticeable amounts of pianist Thelonious Monk.

Not every piece is a tango, but every work is a dance: sometimes it's shambling and schizophrenic like "Candombley," other times elegant and warm like "Payos." And since every worthwhile dance needs two participants, the pairings are many and varied throughout Bien Sur!. Cheek is Solla's primary foil, so their interaction is both abundant and pleasurable. Cheek switches to baritone sax so he can complement Prieto on "Hartbeat" (named for drum icon Billy Hart, who also plays on the tune). Cheek then teams with bassist Jorge Roeder for a marvelously sonorous opening to "Malena," and then creates a lustrous harmonic with soprano saxman Tim Armacrost on the African/Argentinian hybrid "Chakafrik."

As great as Barshay is throughout the session, Hart's machine-gun attack on "Hartbeat" is a triumph, clearly broadcasting his enthusiasm for this sub-genre and for Solla's artistry in particular. The connections Bien Sur! makes are both visceral and vital, and in the end, this music doesn't need a definition. It only needs open ears.

Visit Emilio Solla on the web.