Flutist, composer and arranger, Mark Weinstein began his study of music at age six with piano lessons from the neighborhood teacher in Fort Green Projects in Brooklyn where he was raised. Between then and age 14 when he started to play trombone in Erasmus Hall High School, he tried clarinet and drums. Playing his first professional gig on trombone at 15, he added string bass, a common double in NYC at that time.

Mark learned to play Latin bass from Salsa bandleader Larry Harlow. He experimented playing trombone with Harlow’s band and three years later, along with Barry Rogers, formed Eddie Palmieri’s first trombone section, changing the sound of salsa forever. With his heart in jazz, Weinstein was a major contributor to the development of the salsa trombone playing and arranging. He extended jazz attitudes and techniques in his playing with salsa bands. His arrangements broadened the harmonic base of salsa while introducing folkloric elements for authenticity and depth. The only horn in a Latin jazz quintet led by Larry Harlow at the jam session band at Schenks Paramount Hotel in the Catskills, soloist and arranger with Charlie Palmieri in the first trumpet and trombone salsa band in NYC, arranger and featured soloist along with the great Cuban trumpet player Alfredo Chocolate Armenteros in Orchestra Harlow, and with the Panamanian giant Victer Paz in the La Playa Sextet, and with the Alegre All Stars, Mark’s playing and arranging was a major influence on Salsa trombone and brass writing in the 60s and 70s.

In the early 1970’s Mark took time off from music to earn a Ph.D in Philosophy with a specialization in mathematical logic. He became a college professor and remains so until this day. When he returned to the music scene in 1978 playing the flute, he wrote produced and recorded the Orisha Suites with singer Olympia Alfara, the great Colombian jazz pianist Eddy Martinez and percussionists Steve Berrios, Julito Collazo, Papaito and Papiro along with an Afro-Cuban chorus. Unreleased until recently, music from the Orisha Suites became the theme for Roger Dawson’s Sunday Salsa Show on WRVR.

Mark returned to jazz with a vengeance, working gigs and recording over a dozen CD’s since 1997. Seasoning, his first flute CD experimented with different settings for the flute, including a quartet with vibist Bryan Carrott and Cecil Brooks III on drums and a trio of flute and two guitars with Vic Juris and Rob Reich. In 1998, Mark recorded Jazz World Trios with Brazilian master guitarist Romero Lubambo and award winning percussionist Cyro Baptista. Their exploration of Brazilian themes with classical guitar and percussion contrasted with a freebop trio with Santi Debriano on bass and Cindy Blackman on drums. Jean Paul Bourelly and Milton Cardone completed the set with music based on Santeria themes. The release of Three Deuces in 2000, paired Mark with guitarists Vic Juris, Ed Cherry and Paul Meyers.

Because of limited distribution and more demand that albums available, Mark rerecorded the material from the original Cuban Roots with new arrangements and the help of such giants of Cuban music as pianist Omar Sosa, percussionists Francisco Aquabella, Lazaro Galarraga, John Santos, Jose De Leon, and Nengue Hernandez. It was co-produced with his nephew, trombonist, violinist and arranger Dan Weinstein for Michael McFadin and CuBop Records.

In 2002 Mark had the incredible opportunity to go to Kiev, Ukraine, where his father was born, to record the music of the Ukrainian composer Alexey Kharchenko. Milling Time, the record that they made, stretched his playing in a number of directions, from modern classical music to smooth jazz to Ukrainian folk music. He continued his exploration of his roots with a jazz album of Jewish music with Mike Richmond on bass, Brad Shepik on guitar and Jamey Haddad on drums and percussion. He then turned to Brazil and the music of Hermeto Pascoal’s Calendario do Som, entitled Tudo de Bom with guitarist and vocalist Richard Boukas, Nilson Matta on bass, Paulo Braga on drums and Vanderlei Pereira on percussion.

Mark took time out from Jazzheads to record an album for Otá records in Berlin with Grammy nominated pianist Omar Sosa playing vibes, marimbas and piano along with Ali Keita on balafon, Mathais Ogbukoa and Aho Luc Nicaise on African percussion, bassist Stanislou Michalou and Marque Gilmore on drums. Back to Jazzheads, Mark recorded Timbasa with the percussion team of Pedrito Martinez and Mauricio Hererra, joined by Roman Diaz with the young giants Axel Laugart on piano and bassist Panagiotis Andreou. This was followed by Jazz Brasil with NEH Jazzmaster Kenny Barron on piano along with Nilson Matta and drummer Marcello Pellitteri. His most recent album, El Cumbanchero was recorded with a string ensemble and arranged by Cuban piano virtuoso Aruán Ortiz, along with Yunior Terry on bass and percussionists Mauricio Herrera and Yusnier Bustamante.

Next up is an album of tangos with GRAMMY and Latin GRAMMY nominee, bassist Pablo Aslan, and featuring Latin GRAMMY winner Raul Jaurena playing the bandoneon, pianist Abel Rongatoni and guitarist Francisco Navarro. And many more surprises to come. Show less

From: El Cumbanchero
By Mark Weinstein 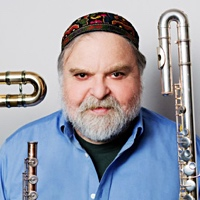 All About Jazz musician pages are maintained by musicians, publicists and trusted members like you. Interested? Tell us why you would like to improve the Mark Weinstein musician page.