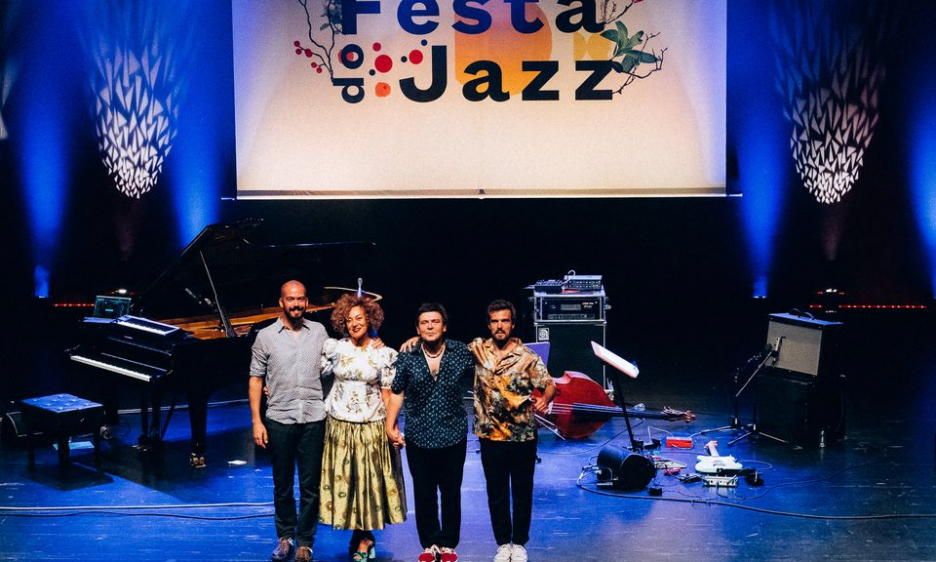 Festa do Jazz, celebration of jazz, is the annual meeting of the Portuguese jazz community. It is normally held end of March/begin of April. For many years it took place in old glory theatre São Luis Municipal in the Baixa-Chiado neighborhood of central Lisbon. Now in the pandemic situation the hosting has been taken over by Centro Cultural Belem (CCB) situated at the banks of the Tago river near Ponte 25e Abril. CCB that also hosted the European Jazz Conference in 2018 (All About Jazz report here) , again took responsibility and produced an online version of the annual meeting in collaboration with Rádio Televisão de Portugal (RTP) on RTP's online stage channel PALCO 2 with free access for the audience.

Jazz festivals are aging, getting into the years these days. Hence, looking back in astonishment occurs more and more and fires our imagination. Festa rendered a highly original contribution with its imaginative cover of a new book that simultaneously functioned as poster of this year's edition. It has a design that leaves an immediate mark In people's memory. Of course many will recognize its distinctive signature. It is the unique signature of Jorge Trinidade alias Travassos, a signature that unequivocal runs through a multitude of unusual visual constellations and projections. Most music minded people know it from the album covers of Portugal's legendary and world-famous recording label Clean Feed. The book by Gonçalo Frota, Jose Dias and Carlos Martins -it is written in Portuguese with short abstracts in English—offers a historical view and renders a view on the present state of art. It will be dealt with in a later article.

Online versions of festivals without audience have been done frequently during this Covid19 summer. My reviews of two of them, German Moers Festival and Belgian Bel Jazz primarily focused on the way of representation, its accessibility and quality in that very format. On that background the music transmitted through it was reflected. The narrative framing and its unfolding, the potential to affect spectators in memorable way appeared to be a crucial element (see All About Jazz here). As Festa was structured as a non-branching succession of three elements, jazz school showcases, concerts and discussions alternating, plus an award ceremony it was easy to keep overview and make choices. The discussions and the award ceremony were, of course, held in Portuguese (no English subtitles provided). Framing and common thread were embodied by Carlos Martins of Sons da Lusofonia and artistic director of Festa since 2002, and João Almeida, radio journalist working for public radio Antena 2. In a mutual ping-ponging, they lead the spectators through the program. It was augmented by backstage conversations and confessions available on the Youtube channel of Festa Do Jazz. There were some problems for users not familiar with RTP PALCO structure in the very beginning and immediately after the festival but that resolved happily.

About Festa I can be very short: the audiovisual registration including the mage direction was superb, of extraordinary quality and clarity, one of the very best I experienced this summer. The registration is still available on demand on RTP PALCO 2a.

This framework had to be further enlivened by the differing (stage) personalities of the performing musicians. Enacting differed in terms of gestural-theatrical ways of relating and connecting to the virtual audience. There is one Portuguese artist that uses to set high standards on this dimension: vocalist Maria Joao. She did it again especially at the end of this year's Festa online edition. She bridged the online gap in her passionate, invitational and oh so seizing joyous way thereby carried by the open and sensitive underflowing of her three playful fellow musicians. Her masterful theatrical shaping of emotional shadings by her lively, flexible voice and gesturing, it fully blossomed -a felicitous finish and a stroke of luck for the virtual audience.

Counterpart to her playful extroversion was saxophonist Andy Sheppard, who performed with his new group Costa Oeste of Portuguese ace musicians, guitarist Mario Delgado, bassist Hugo Carvalhais and drummer Mário Costa. Sheppard is a reserved person on stage when it comes to talking to the (virtual) audience. He kept it to a few 'obrigado' and concentrated on the inner voice of the music. The music of Sheppard and his fellow musicians was perpetually burning deep from inside -more fiery than I have experienced before from him. There was a special fire running through the music, not only in the piece based on Portuguese folk music. Sheppard's calm and colorful musical expression has gained an extra quality of inner fire and firmness. A resident of Portugal now for while, he markedly has been infected by his new surrounding.

From the very beginning Festa used to involve International musicians with a special connection to the Portuguese scene (also manifest in many albums) as drummer Jim Black and pianist Kris Davis from New York, violinist Théo Ceccaldi from Paris or this year saxophonist Andy Sheppard.

Two festival days can only present a specific sample of the scenes' situation and directions. Now in its 18th year, the meeting from the beginning had a strong focus on fostering young(est) talent. The showcases and competition of the country's jazz schools as backbone of jazz education is a unique Portuguese tradition. It serves the development of group identity and provides creative impulses. The line-up of the meeting shows a balanced (re)presentation of gender, generations and directions, which indicates a functioning network interconnected in multiple ways.

The Portuguese scene always had a quite large portion of strong free improvisers. While the line-up is just a selection from a larger pool of musicians and groups, quite some mainstays of the Portuguese scene as vocalist Maria Joāo and bassist Carlos Bica, pianist João Paulo Esteves da Silva, bassist Carlos Barreto and drummer Alexandre Frazão as well as saxophonist Carlos Martins, the long time organizer, were present in this year's program as well as forces of far international reach as Clean Feed producer Pedro Acosta. The same applies to a number of musicians of the younger generation as quite well-known trumpeter Susana Santos Silva, accordionist João Barradas, drummer Gabriel Ferrandini known from Red Trio with bassist Hernani Faustino and pianist Rodrigo Pinheiro as well as from Motion Trio of saxophonist Rodrigo Amado together with cellist Miguel Mira, and drummer Joao Lobo known from the trio of Italian pianist Giovanni Guidi with bassist Thomas Morgan (ECM). Considering the color and quality of music from Portugal, it is striking that Portuguese musicians and the label of producer Manfred Eicher did not yet really find each other. Maybe that Andy Sheppard can open up something and create a well-working beautiful connection.

This series of names immediately hints at the international connectedness of the scene(s) in Portugal. Trumpeter Susana Santos Silva has among others a strong Swedish and French connection. She resides in Stockholm, and she is a member of prestigious French Orchestre National de Jazz (ONJ), building on formative years as a member of Portuguese jazz orchestra number one, Orquestra Jazz de Matesinhos from the north of the country. Drummer João Lobo resides in Belgium and has a prominent Italian connection. Saxophonist Rodrigo Amado, mentioned above, has a longer story of prominent US collaborations and bassist Carlos Bica as a long time resident of Berlin has been involved in manifold international collaborations. The oldest one is the legendary and still vital trio Azul with German guitarist Frank Moebus and US-American drummer Jim Black, now also residing in Berlin. The series of names can easily be expanded.

Part of the program was also a tribute to pianist Bernardo Sassetti (1970-2012), Portugal's best kept musical secret. Sassetti, who tragically fell out of life early, would have turned fifty this year. He had and still is of high importance for the Portuguese scene comparable for example to Krzysztof Komeda (1931-1969) for the Polish scene. Bassist Carlos Barretto and drummer Alexandre Frazão, the other two members of Sassetti's legendary trio joined forces with two musicians of the younger and youngest generation, saxophonist João Mortága and pianist João Pedro Coelho under the title "Mali M'Buli Baaba," a well-known composition of Sassetti. João Mortága is one of the busiest younger musicians known amongst others from the ensemble Axes that presented itself at the European Jazz Conference in 2018 in Lisbon. So, Sassetti was strongly present again this year not only in spirit but with a haunting rendition of his work. It should also be mentioned that his legacy is curated by Casa Bernardo Sassetti. One of the awardees of the Sassetti price is young drummer-composer Pedro Melo Alves, one of the extra-ordinary young forces of the Portuguese scene of strong international acclaim.

Festa do Jazz stands for continuity of the articulation of Portugal's lively jazz spirit, for its strongly developed characteristic jazz expression.Recognizable it is richly branching and internationally well-connected -maybe not yet so much in quantity but for sure in quality. The meeting conveyed a concise impression of the scene's streams and directions. It invited to trace and discover beguiling voices and sounds of your own gusto.