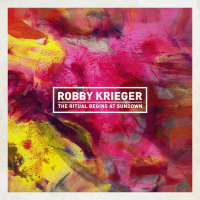 The Doors are one of the most iconic bands in rock music, and people who collect their albums have recently been treated to some special releases. The 50th anniversary release of Morrison Hotel (Elektra Catalog Group, 2020) features a remastered mix along with over an hour of bonus tracks. The latest Record Store Day drop featured a special stripped down reissue of their 1969 album The Soft Parade (Elektra Catalog Group, 2019), with all of the orchestration removed. These classic albums will certainly appeal to listeners, but another Doors-related release also deserves attention: The Ritual Begins at Sundown, a new release by The Doors' guitarist, Robby Krieger. This album showcases Krieger's exceptional musical talent, and at 74, Krieger is still as strong as he's ever been as a guitarist.

It might be easy to pigeonhole Robby Krieger simply as The Doors' guitarist and leave it at that. Krieger, however, is far from limited to hanging back in Jim Morrison's shadow. After the band dissolved, Krieger went on to an impressive solo career, and many of his solo albums are clearly rooted in jazz. The Ritual Begins at Sundown is no exception. Here, Krieger offers an incredibly strong jazz fusion package that should not be overlooked.

This album has a definite Frank Zappa influence, which is not surprising. Krieger's connection with Zappa goes back for years. Zappa actually wanted to produce the first Doors album, but the band decided to go with Paul Rothchild instead. During his solo career, Krieger often worked with Zappa alumni, and even covers some of Zappa's songs.

Most of the musicians featured here, including Arthur Barrow, Sal Marquez, Tommy Mars, and Chad Wackerman have all been members of Zappa's lineups in various incarnations. Krieger even covers Zappa's composition, "Chunga's Revenge" on this album. The Zappa influence here, however, is much closer in feel to the albums Waka Jawaka (Bizarre-Reprise, 1972) or The Grand Wazoo (Zappa Records, 1972) than something like Over-Nite Sensation (Discreet, 1973).

In spite its possible appearance, this is far from a Zappa wannabe album. Each song on this album highlights Robby Krieger's talent both as a composer and a guitarist. There's also plenty of focus on each of the players involved. The musicians work together well, and they appear to be having a good time playing on this album. From start to finish, The Ritual Begins At Sundown offers plenty of solid and infectious grooves.

Many of the songs have an almost playful quality to them. "The Hitch," for example, has an upbeat, driving rhythm that's pure fun. "Dr Noir" also brings out a lighthearted tone that incorporates some horror movie soundtrack motifs. The mood here, though, definitely seems more like The Munsters or The Addams Family than Gothic horror.

The album also includes some more introspective or sentimental selections. With "Yes, The River Knows," a Krieger original that originally appeared on The Doors Waiting For The Sun (Elektra, 1968), he pays tribute to his Doors band mate Ray Manzarek, who passed away in 2013. In a recent interview, Krieger mentions that this was one his favorite Manzarek piano parts, and here, Tommy Mars recorded it exactly like the original.

Speaking of covers, the version of "Chunga's Revenge" deserves recognition. Frequently, cover versions don't add up to the original, but this isn't the case here. Krieger takes this Zappa composition and makes it his own. The guitar work here is impressive, and this version is arguably equal to, if not even better, than the original.

At this stage in his life, Robby Krieger could easily retire and never pick up a guitar again. Fortunately for music lovers, he continues creating and evolving as a musician. The Ritual Begins at Sundown proves that. This is a first-rate album in every way, even in the packaging. One of Krieger's paintings is used for the album cover, and vinyl copies are on yellow vinyl. CD and digital customers get a slightly different bonus—those versions include an additional song, "Slide Home," which doesn't appear on vinyl copies.