BY JOHN KELMAN
November 7, 2010
Sign in to view read count 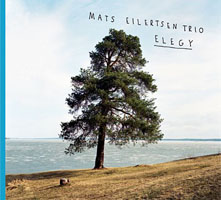 He's best-known internationally for his work on ECM recordings by artists including guitarist Jacob Young, pianist Wolfert Brederode, and, most recently, pianist Tord Gustavsen, with whom he's been touring in support of Restored, Returned (2010). But while these associations might suggest a bassist disposed to gentler forms and understated freedom, they're only two of Mats Eilertsen's many sides. A busy bassist in his native Norway, Eilertsen's broader reach can be heard on singer/songwriter Solveig Slettahjell's Tarpan Seasons (Universal, 2010), Hardanger fiddler Nils Okland's Bris (Rune Grammofon, 2005), the sonic extremes of Crimetime Orchestra at Molde Jazz 2009 , and the subdued spontaneity of The Source on its 2006 self-titled ECM set.

Left to his own devices, and with a gradually growing discography as a leader, Eilertsen does lean towards a softer, and sometimes darker approach, with the flexible approach to time that's near-signature to Norwegian improvised music. Elegy is the bassist's first with a conventional piano trio, though it's far from the tradition; the trio's take on trumpeter Miles Davis' enduring "Nardis" filters its familiar theme through a particularly dense prism—Thelonious Monk-like in its quirky mannerisms as opposed to the romanticism associated with {Bill Evans, the pianist most closely associated with the tune. But Monk wouldn't have approached it with the kind of temporal elasticity that Eilertsen, drummer Thomas Strønen manage with such effortless fluidity.

Eliertsen's choice of pianists for this set, largely composed of original material and spontaneous composition, features Harmen Fraanje, an up-and-coming Dutchman who, in addition to being a member of Eric Vloeimans' Fugimundi trio, has released three albums of his own, most recently Avalonia (Challenge, 2010). A good fit for this trio—comfortably blending European classicism with jazz's linguistic specificity, Fraange's "Six Weeks" is a stunning piece of dark melodism, juxtaposed with waves of paradoxically rounded angularity; a three-way conversation with Eilertsen, who blends robust, woody tone with flighty leaps into the upper register, and Strønen, who suggests time more often than playing it, coloring the music with dark, weighty cymbals and delicate movements around the kit.

Eilertsen's material ranges from the tender, folkloric "Sukha" whose song-like lyricism, rests somewhere between the late Esbjorn Svensson's pop-centricity and Gustaven's mid-tempo minimalism, and "Kram," which leans more towards the greater extroversion of "Nardis," but with an underlying thematic emphasis. The trio's free improvisations are equally impressive, from the brief, quarter-note piano chord-driven title track, a feature for Eilertsen's arco, to the strummed bass figure of "Flying"—Fraanje's ebbing-and-flowing waves evoking images of birds in flight—and the more jagged but equally cinematic "Falling."

Throughout, Eilertsen ensures complete democracy, distanced from a convention where piano is supported by a rhythm section of bass and drums. There's no lack of support to be found on Elegy, but it's a mutual thing—pulse as likely to come from Fraanje supporting Strønen's open-minded excursion as it is the other way around. Eilertsen anchors the bottom when needed, but is, more often than not, a melodic foil in this equilaterally designed and, consequently, open-minded trio.