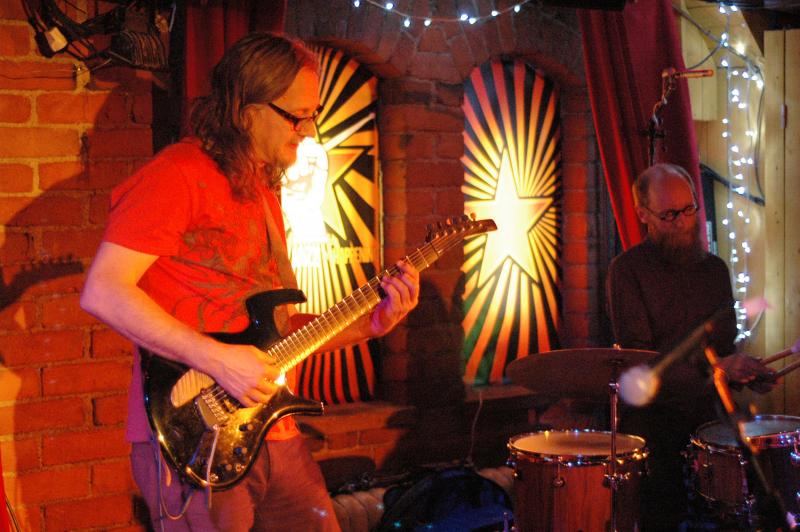 Day two of Tampere Jazz Happening kicked the festival into high gear, with a terrific line-up at both the festival's primary venues: Pakkahuone's Old Customs House Hall, which seats upwards of a thousand people and is used for the larger, primarily international acts; and Telakka, a smaller club that seats a couple hundred—though the standing room only crowd that gathered well in advance of the evening's 9:00PM start time, easily pushed that number up by another hundred. The good news is that there's a second floor at the venue where, with an additional bar outfitted with a video screen and sound system, it was also possible, for those who arrived too late to be on the main floor, to sit down, have a drink and watch the shows in greater comfort.

The two venues are across a pedestrian square from each other, with another club, Klubi (to learn the Finnish language, TJH Executive Director Minnakaisa Kuivalainen joked, just take the word and add an "i') situated kitty corner to Telakka; the site of late-night shows that start each evening at 1:00AM. The same building that hosts Klubi also houses the festival offices as well as an artist lounge, where it's possible to meet and hang with many of the artists performing at TJH. Completing the picture, the main festival hotel is just around the corner, making everything within only a couple minutes walk; a good thing, since the weather has been very unsettled, with rain on and off the first couple days—even light snow falling on the morning of festival's third day.

Telakka is where the majority of the Finnish acts perform, and the first evening at the club provided a real cross-section, ranging from an opening guitar duo to a centrist acoustic jazz quartet and, finally, a rock-tinged group that combined psychedelic guitar pyrotechnics with freewheeling saxophone, thundering drums and some vintage synth sounds. It all made for an evening, in an intimate club environment, that went from the sublime to the extreme over the course of three-and-a-half hours.

By the time Teemu Viinikainen and Niklas Winter—two guitarists well-established in the Finnish scene, with over forty albums released individually as leaders or sidemen—hit the small stage at Telekka a few minutes late at 9:15PM, the club had gone, over the previous couple hours, from lightly populated to jam-packed. Considering the size of the room, the number of people standing throughout, and supporting posts partially obstructing the view from different angles, the crowd was remarkably focused on a duo weighing heavily on the side of subtlety and lyricism. Viinikainen and Winter demonstrated a kind of comfortable and mutually respectful empathy, and control over dynamics that grabbed the audience's attention and kept it, from the first notes of a set which combined original compositions from each guitarist with a couple of well-known standards, including the well-deserved encore, a wryly reverent look at Thelonious Monk's classic blues, "Blue Monk," that is also the opening track to the duo's first release, Eight Songs Seven Keys (Abovoice, 2010). 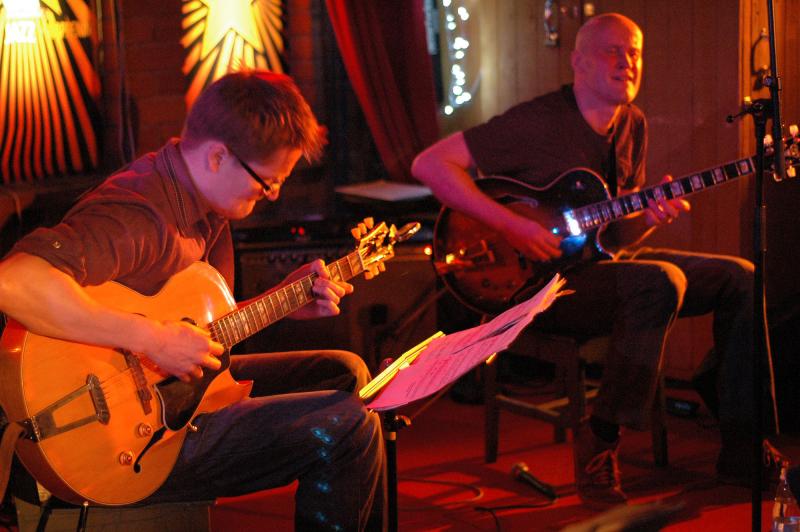 The duo's rearrangement of the classic "My Funny Valentine," which came about half-way through the pair's 45-minute set, was more eminently adventurous, taken at a faster clip and with a rhythm guitar pattern that, at the beginning at least, was tinged with a hint of Latin. But, as was the case with most of the music in the set, the song's structure drove a constant evolution and shift, as Viinikainen and Winter traded roles, each supporting the other in a relatively conventional fashion.

Still, as centrist as the duo was, its harmonic sensibility sometimes took it to other places, with a dark ambiguity recalling guitarist John Abercrombie solo, and in duet with Ralph Towner, from the '70s. Already demonstrating a synchronistic evolution since the recording of Eight Songs Seven Keys a few months back; other than the two standards, the duo surprisingly performed very little from its recording. That said, the hollow body tones of both Viinikainen and Winter were brighter and more direct, and far less reverb-drenched than, say, Abercrombie back in the day.

Of the two, Winter tended to be the more oblique and angular player, though he never sacrificed lithe dexterity entirely. Viinikainen was the smoother, more fluid of the pair, delivering long, serpentine lines that weaved in and around Winter's combination of finger-picking and propulsive strumming, just as Viinikainen's own strong rhythmic sensibility created a backdrop upon which Winter could completely trust, when he took over the spotlight.

Trust in fact, was key, as was a fundamental sense of good time. Without a drummer or a bassist, and with the two guitarists sometimes dissolving into spare sections where time was, at best, suggested, it became even more essential that the two could internalize that time and know where it was, without it being explicitly there. It's in the context of the duo that an artist is at his/her most exposed; not only are their abilities, instincts and improvisational élan laid bare, but their communication skills—or lack thereof—are impossible to disguise. Viinikainen and Winter needn't have worried, as it was clear, from their Tampere Jazz Happening performance, that this was a duo communicating at a very deep level, playing relatively quiet music that was, nevertheless, thoroughly captivating.

A student of Tony Williams and protégé of Will Kennedy, André Sumelius was looking forward to his Tampere Jazz Happening performance as a release party for his latest disc, but unfortunately the CD didn't make it in time. Still, that didn't stop the drummer's set from being a terrific combination of high-powered modal blowing and more straight-ahead swing, delivered by a crack band, featuring pianist Alexi Tuomarila—the best-known of the quartet internationally, for his work with Polish trumpeter Tomasz Stanko on Dark Eyes (ECM, 2009)—along with Sibelius Academy instructor/saxophonist Jussi Kannaste, and recent Sibelius graduate, bassist Ville Herrela. 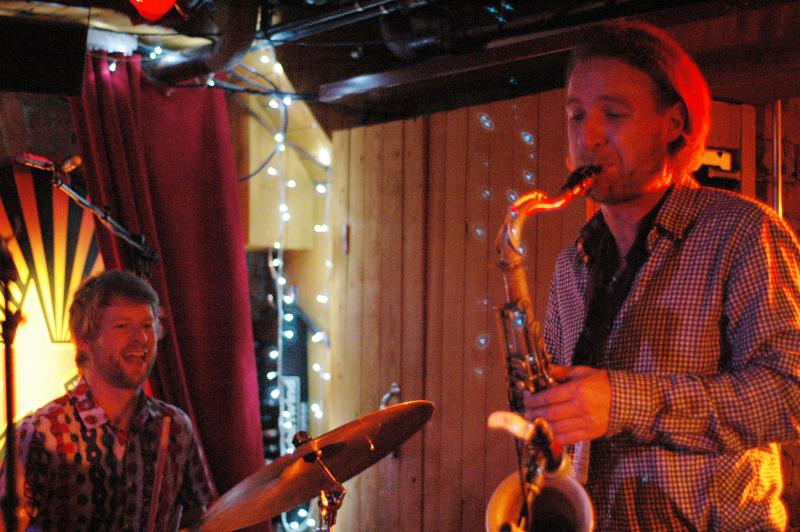 Based on the group's 75-minute set, Sumelius' new CD will be a largely more mainstream affair than Kaira (Abovoice), his 2002 album featuring Norwegian trumpeter Arve Henriksen, well-known Finnish bassist Uffe Krokfors (Edward Vesala, Iro Haarla, Krakatau) and one of the country's best-kept secrets, vibraphonist Severy Pyysalo. The quartet opened its performance at a mid-tempo swing with a hint of gospel; ambling, but with enough firepower under the cover to encourage Tuomarila's early set high point, the tremendous disposition for construction that the pianist demonstrated at his 2010 performance with Stańko at the Ottawa International Jazz Festival in even sharper focus, using small motifs as building blocks which he continually shaped and reshaped, building upon them as they evolved into the next core idea.

He may have been the leader, spokesperson and composer, but as a player Sumelius avoided any tendency to dominate; instead, he was simply one spoke on the wheel, pushing and pulling the group as it worked its way through fierier material like the set's second piece, a brightly swinging tune with a knotty start/stop head that led to another outstanding solo from Tuomarila, as well as a lengthy exploration by Kannaste that suggested he's clearly someone to watch. Tuomarila was channeling McCoy Tyner in his cycles of fourths, but with a lighter right hand contrasting his suitably powerful left for the ascending and descending series of chords, Tuomarila's touch and tone were all his own, distinct and increasingly recognizable—even on the small upright piano that was the only kind that could fit on Telakka's small stage. Kannaste's sound was also personal, with terrific technique but, even more importantly, an acute sense of what's right in the moment, as he went from lengthy runs to upper register squeals and lower register growls. 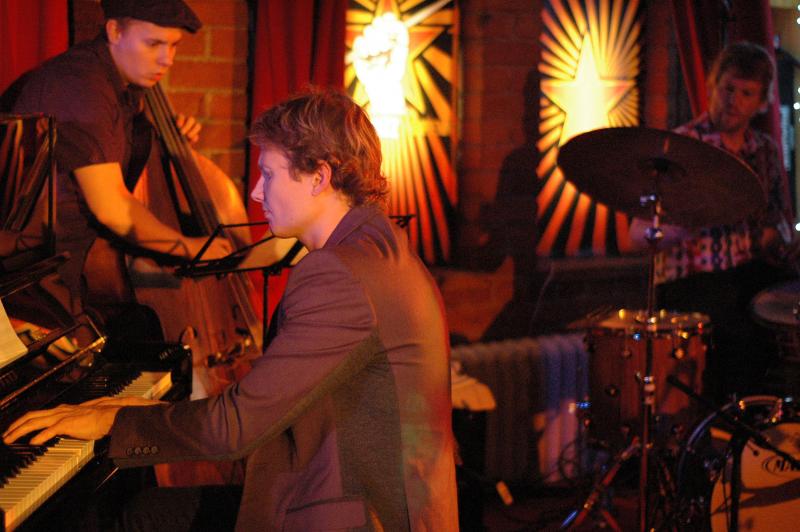 Like Sumelius, Herrala's role was more supportive, though the quartet wouldn't have managed its unshakable pulse and, at times, greater energy, were it not for the rhythm team's big ears and even bigger hearts. Sumelius did take a solo—or, rather, a series of solos, trading with Kannaste—on the closing track to a set that possessed an unusual arc: rather than building to a climax, leaving the crowd screaming for more, the performance gradually reduced from a fast boil to a slow simmer, but curiously, it worked.

If there were any fears that the evening at Telekka was going to be all about the mainstream (not that there's anything wrong with that), Markus Holkko Quartet's closing set of the night dispelled any and all of them. With an electro-centric, rock-edged group that also featured drummer Mika Kallio, keyboardist Kari Ikonen, and guitarist Raoul Bjorkenheimn (Krakatau, Scorch Trio, UMO Jazz Orchestra), Holkko delivered a set that weighed heavily on improvisation, despite there being clear structures to provide basic foundations, and both starting and rallying points.

Altoist Holkko also played an ARP Odyssey synth which, combined with Ikonen's Moog, was analogue heaven for those who still find contemporary digital sonics somehow sterile. From odd, sci-fi bleeps to visceral, in-the-gut bass lines, both Holkko and Ikkonen combined with the often effects-laden Björkenheim, meshing freewheeling extremes with moments of dark beauty...and everything in-between. The set opened with a soft, pop-like chord sequence from the guitarist, but whatever lulling, hypnotic state that it engendered was blown out of the water when the group made a paradigm shift into more aggressive territory, with Holkko's raw, unfettered free play matched by Kallio's fluid textures and Ikonen's otherworldly landscapes. 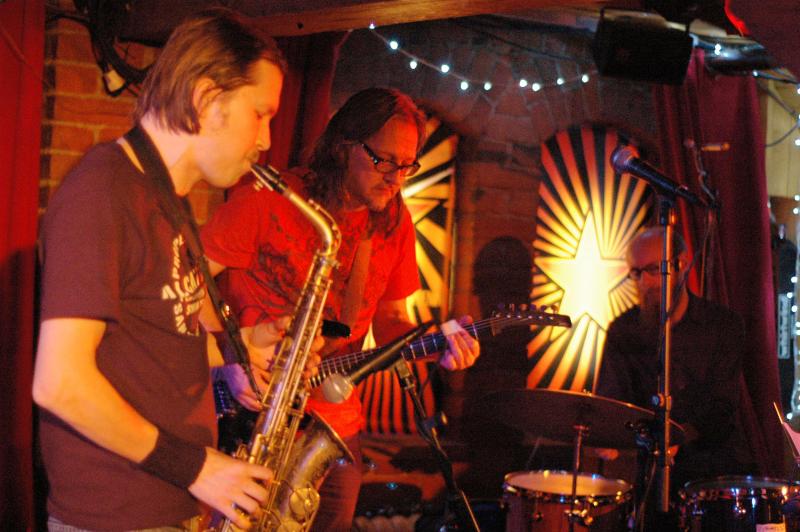 The music continuously moved back and forth, from a whisper to a roar, with occasional stops along the way that entered the realm of reggae—Björkenheim's pitch shifter dropping his guitar into the lower register for a pulsating bass line—to an early set high point, where the guitarist channeled Jimi Hendrix, but with a more sophisticated approach to harmony, even as, from a purely emotional perspective, Björkenheim played with complete and utterly reckless abandon.

Those who think this kind of music lacks structure might have been surprised at the sheet music onstage, especially mid-way through the set, when Ikonen pulled out a dauntingly large chart. But what made Markus Holkko Quartet work was that, despite the irrefutable evidence of formalized structures creating context, this was far from music being read off the page; instead, the group almost literally yanked the music from the page, imbuing it with power, passion and commitment.