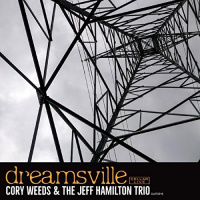 Even though the substance and framework of jazz are constantly changing and evolving, the music's bedrock—marked by spontaneity and free-wheeling swing—remains essentially unimpaired and secure. And when it comes to swinging, it's hard to eclipse the irrepressible pulse of the tenor saxophone, an instrument whose long and enduring ties to jazz and swing have been epitomized by such masters as Lester Young, Dexter Gordon, Wardell Gray, Stan Getz, Zoot Sims, Gene Ammons, Johnny Griffin, Hank Mobley, Sonny Rollins, John Coltrane and other sovereigns too numerous to mention.

When it comes to modern or retro-swing (i.e., rephrasing the seminal Swing Era), the tenor has found a home in the capable hands of Harry Allen, Ken Peplowski, Scott Hamilton and their near relations. Add to that singular fraternity the name Cory Weeds, a shining light from Vancouver, Canada, who proves on Dreamsville, his second recording with the superb Jeff Hamilton Trio, that he is ready and able to carry forward and enrich the impressive legacy of swinging, tenor-style. Weeds employs a rigorous, no- nonsense approach and pure, bell-like sound that would surely have Allen and his colleagues smiling their assent. And like them, he is never at a loss for a reflexive yet suitable turn of phrase.

As for Weeds' teammates, there aren't enough words to summarize properly the exceptional talents of Hamilton, pianist Tamir Hendelman and bassist Christoph Luty, a working trio for more than two decades whose every inflection is a paradigm of affinity and tastefulness. Hamilton, a master with brushes or sticks, is a resourceful timekeeper who knows he needn't make a lot of noise to prove his point. Hendelman and Luty are exemplary when backing Weeds, even more so when soloing. That brings us to the music, which is marvelous throughout, traversing the gamut from shapely ballads to impetuous flag-wavers, on all of which Weeds and the trio excel. Weeds wrote one ("How Do You Like Them Apples"), Hendelman another ("Bennissimo"). It's good to see "Who Can I Turn To," "Robbins Nest," Henry Mancini's "Dreamsville" and Frank Rosolino's "Blue Daniel" nestled snugly among the lesser-known themes. "Hammer's Tones" was written by the late Swiss saxophonist George Robert, one of Weeds' important mentors.

In sum, a superlative session by Weeds and the trio, and a worthy successor to their earlier album, This Happy Madness. Four stars for that, and another half-star for the great Jeff Hamilton.

Who Can I Turn To; Lady Wants to Know; How Do You Like Them Apples; Blue Daniel; Dreamsville; Hammer’s Tones; Nothing to Lose; Bennissimo; Love Is a Now and Then Thing; Robbins Nest; She Walks This Earth.