Dianne Reeves At The Belfast Festival 2014 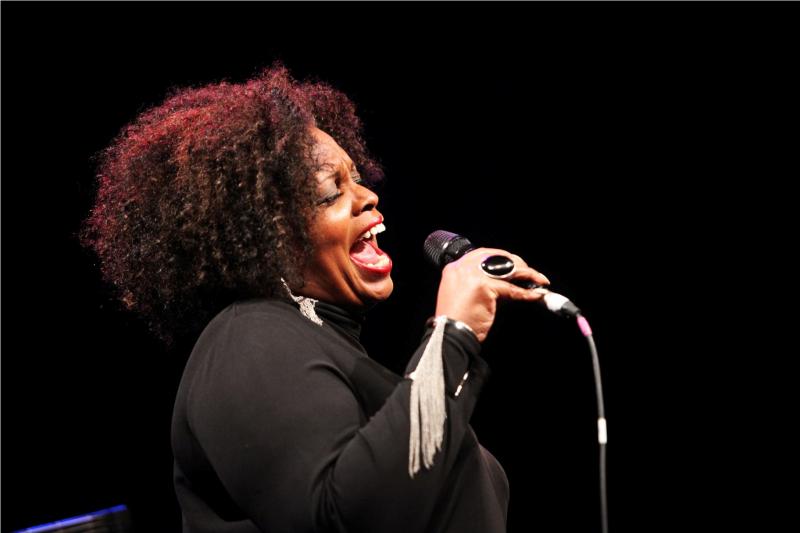 Dianne Reeves' first visit to Belfast coincided with her first album in five years. For some artists, say Bill Frisell, Pat Metheny or John Zorn, a gap of half a decade between releases would be spoken of in reverential terms as their "silent period," but for other artists, like Reeves, no such sense of mystery surrounds an artistic drought. After several decades recording and a bunch of Grammy Awards, Reeves' career seemed to take a back seat to life, hence the title of her new album, Beautiful Life (Concord, 2014). It was a rejuvenated, beautiful Reeves that took to the stage of the Elmwood Hall with an eclectic set that was very much of her time.

Reeves has made her name as one of the great jazz standard interpreters. She's sung the Duke Ellington songbook, paid homage to Sarah Vaughan and generally mined the Great American Songbook for all its worth. There was however, little of Reeves the jazz diva during this Belfast gig. Instead, the audience was treated to Reeves the R&B, soul, gospel and pop singer. It's a trend, at least as far as her recordings go, that dates to the cross-over album When You Know (Blue Note Records, 2008) -one of Reeves' most commercial offerings.

Over the years, however, Reeves has covered The Temptations, The Shirelles, Joan Armatrading and Joni Mitchell -there's always been much more in Reeves' locker than just jazz standards. That Reeves entertained the Belfast audience with songs by Fleetwood Mac, Bob Marley, The Temptations and Mali said much about the breadth of her influences and the direction her music has taken.

Reeves' band of pianist Peter Martin, guitarist Romero Lubambo, bassist Reginald Veal and drummer Terreon Gully took to the stage and launched into an extended jazz-funk chops-loosener based around the Gershwins' "Summertime." They noodled pleasantly for a dozen minutes until Reeves joined, kick-starting an original arrangement of Fleetwood Mac's "Dreams," the highlight of which was the singer's wordless improvisation. Similarly, "Stormy Weather" was almost unrecognizable from the bluesy templates of Lena Horne, Ella Fitzgerald and Billie Holiday; instead, Reeves' interpretation ventured more towards a Joni Mitchell-esque, intimate lyricism.

A feature for Reginald Veal saw the bassist feel his leisurely way into a sultry blues groove, drawing Reeves into his orbit. The singer's gospel-tinged scat covered her remarkable vocal range and led into the Harold Arlen/Johnny Mercer chestnut "One for My Baby (And One More for the Road)"—a stirring blues with Lubambo's fire stoking Reeves' engine. The band swung hard on Reeves' gospel celebration "Today Will Be a Good Day" before delivering a soaring acoustic version of Mali's "Beautiful."

Reeves' original "Cold" and Terri Lyne Carrington's "Satiated (Been Waiting)" came across as fairly standard R&B fare, though the latter was enlivened by Lubambo's cutting electric solo. More satisfying was Reeves' Afro-Caribbean take on Marley's "Waiting in Vain," featuring the singer's extended vocal improvisation and a sparkling acoustic solo from Lubambo. For the encore, and by special request, Reeves sang The Temptations "Just My Imagination," taking her back to her singing roots.

Afterwards, Reeves and her band took part in a Q&A session. Asked why she hadn't sung many jazz standards in the set, Reeves responded: "The jazz standards became standards because they were the popular music of the time and jazz musicians took that music and made it their own. So, that says to me to listen to the music that you love now. I still sing standards—not all the time—and I love them but in order to grow I have to find different spaces."

The eclectic nature of Reeves set and her penchant for interpretation perhaps harks back to the musical environment that nurtured her: "I grew up in a time when music had no boundaries, no fences, no this genre that genre," Reeves explained. "You might go to a concert and see Miles Davis and Ravi Shankar on the same stage, with any number of rock musicians sitting in having a ball playing. That's the time we grew up in. I grew up listening to Elvis singing the music of The Beatles and Marvin Gaye doing jazz albums; jazz musicians were always listening to the songs of the time, giving them a jazz sensibility. That was the time."

As to the thorny old question about the nature of jazz, the most thought-provoking response came from Lubambo: "More and more, I can see at least, that jazz is open your arms and embrace the different cultures that come to you and make your voice with those different languages."

In moving slightly further away from jazz standard sets Reeves has opened her arms to a new world of possibilities. She is creating more open musical spaces, finding fresh inspiration and developing her vocabulary. There's nothing overly adventurous about her repertoire but as a singer versed in the multi-facedted American vernacular there are still few who can touch her.