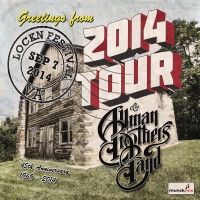 For the better part of the new millennium, the Allman Brothers Band has made available a majority of their live shows, first using Instant Live and then through Munckmusic. There are hundreds of shows available, so why select Allman Brothers Band—Lockn' Festival—Arlington, VA, September 7, 2014?

The answer is manifold. First, guitarists Warren Haynes and Derek Trucks announced earlier this year that they would be leaving the band to focus on their own bands and solo careers. That is justifiable as both have successful bands (Gov't Mule and the Tedeschi-Trucks Band) who have solid track records. It also effectively ends the Allman Brothers Band. Second, this particular performance is a re-creation of The Allman Brothers at Fillmore East in its entirety and, third, it was performed in honor of the late Brian Farmer, guitar technician for the band, Gov't Mule and the Warren Haynes Band.

Described as being an emotional night, this concert was a highly charged one where the performances transcended the mere jam band mundane to achieve a level of perfection missing in the plethora of Allman Brothers' live recordings. It is in the longer pieces that this perfection is seen. The staples, "You Don't Love Me," "In Memory of Elizabeth Reed," "Whipping Post" and "Mountain Jam" all achieve a triple point of the sublime where Haynes and Trucks' guitar telepathy reach a perfect harmonic understanding. I suspect it is hard to summon the fire experienced here every performance, but the two guitarists do so with a corrosive efficacy. The performance ceased being about Duane Allman and Dickey Betts a long time ago and became about the unit of the Allman Brothers band. And at 45 years, they wear it well. Very well.

The evening was not without its boners. Gregg Allman confused the words to "Whipping Post" and Warren Haynes' vocal enters in too soon in "Blue Sky." But hey! They are a jam band, maybe the best to play. Besides, the searing "Statesboro Blues" and "Done Somebody Wrong" more than make up for it. The Allman Brothers are not long for us. The band's 2014 run at the Beacon Theater in New York City will be its last. Now there should be some concerts to own.