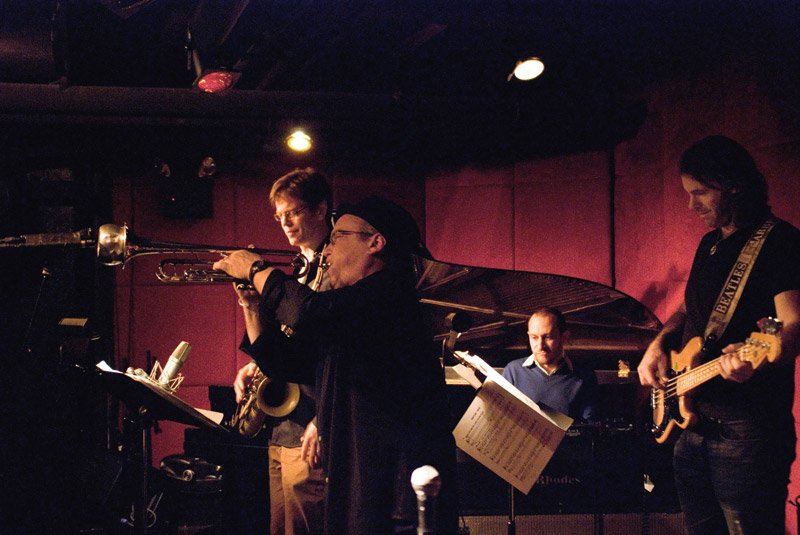 This was the first of four Dave Douglas nights at the Jazz Standard, each of them highlighting a different performance perspective. The unexpected has become the expected where this high-wire trumpeter is concerned. Douglas is perpetually scouting for fresh settings, new musical concepts and unfamiliar terrain where he's able to stretch his abilities, to heighten an already fearsome virtuosity and communicative playing passion. Three out of the four combos were premiering unexplored parameters. The second evening teamed Douglas with the new music ensemble So Percussion and the third unveiled a new acoustic quintet featuring saxophonist Ravi Coltrane and pianist Vijay Iyer, whilst the closing session was the only one which could be viewed as in any way retrospective, as the tried and trusty Brass Ecstasy waddled its Art Ensemble Of New Orleans way onto the stage.

The opening Thursday night set involved, perhaps, the most rugged, pushy—and certainly the most electrified—sounds. The Key Motion Quintet is co-led by tenor man Donny McCaslin, setting out to combine the repertoires of his recent Perpetual Motion (2011) with the songbook of Douglas's own Keystone combo (the McCaslin disc was released by Greenleaf Music, so it's all in the Douglas family). Key Motion also features drummer Mark Guiliana and electric bassist Tim Lefebvre, from Perpetual Motion, and keyboardist Adam Benjamin who, in addition to playing on the album, is also a Keystone regular. Despite this grafting of personnel and songbooks, the resultant band became something else again, partly due to the sheer excitement of its live presence, and partly because the music has clearly evolved, tightening its rubbery looseness.

Both Benjamin and Lefebvre were dedicated to the electronic perversion of their instruments, emitting sounds through a veil of knobbery—distorting, fragmenting, spangling, cutting, cracking and frosting—but invariably sounding like themselves. In a demonic pact with Guiliana, they set about turning fusion into a darkly funky, subliminally threatening beast. The rhythms were jittery, the interlocks were on the run, and the punch was deep down at bowel level. The front line of horns was left to dwell in a comparatively traditional house of jazz rules, spurting a constant alarum and operating at a flashing level of execution. Douglas talked directly into his trumpet, shaping phrases whether crisply muted or outwardly expelled. McCaslin's tone was less vocal, more liquid, like a subterranean current, searching for its blowhole. It was as if the old bebop language had been forced to mutate into a new form that was more of a patchwork, urged towards a greater schizophrenia by the rhythm team's twitching constructions.

Key Motion is developing a dub jazz vocabulary. During McCaslin's "Energy Generation," Lefebvre flooded his volume control up to full with his pinky, intermittently creating a low bleed of sub-tones. Guiliana was the master of strictly controlled cymbal skitters and self-muted clumping blows, while Benjamin played his Fender Rhodes with one hand, adjusting his effects filtration unit with the other. If eyes were closed, some of this threesome's sounds would shade into each others' corners. This first set found a band sounding as if they'd been closely twinned for quite some time. The rapport was deeply locking into place. All elements were perfectly interrelated—the groove, the tunes, the momentum, the tension, the band stance of playful humor, the ripping horn solos over innovative soundscapes, and the sense that spotlighted passages were being taken in unpredictable ratios and in surprising sequences; not always alone, but in headlong tandem. Audience attention was totally gripped throughout.

How many birthday cakes can a trumpeter gobble? To celebrate his 70th year, the Interpretations Series presented two nights of new music from Wadada Leo Smith at Brooklyn's recently transplanted Roulette. This meant three bands each night and a communal cake at the end of each evening. Smith's actual birthday fell two days after the second gig, so maybe there were more cakes on the way. The first evening's candles were of the frustratingly fire-hazard kind that spring back into life after being extinguished, with Smith blowing them out through his trumpet, which seemed like a highly appropriate act. The first night's proceedings were constructed very contrastingly with the second session. Each of the three sets (the Mbira trio, a string quartet with singer Thomas Buckner, and the Golden Quartet) restrained themselves to around thirty minutes apiece, and the show concluded surprisingly early.

This second evening operated at the other extreme. Following an afternoon's rehearsal of this complex, varied and ambitious music, a sound check was still in progress even as the audience was gathering. The gig began around 30 minutes late, and each set doubled its duration compared to those of the previous evening; it was, after all, a Friday night. Even so, Smith wanted to relax into the experience, to savor the unfolding of what amounted to a lot of freshly penned work. All three ensembles and settings took hold of the audience firmly, and there was no sense of crawling timepieces in the house. The epic evening rolled on by in a consistently engaging fashion.

First off, the Golden Quartet was expanded to a Golden Sextet, with Susie Ibarra joining Pheeroan AkLaff on a second drum kit, and vibraphonist Bobby Naughton emerging from decades past to revive his old partnership with Smith. The rapidly ascending young Cuban pianist David Virelles replaced Angelica Sanchez from the previous evening, while John Lindberg was, as ever, on upright bass. Smith's general body language gave the impression of stern impatience and dissatisfied frustration, as he repeatedly made overt gestures to Virelles, guiding his relationship to the music's careful evolution. Smith's manner might have been the result of a certain way that he chooses to display excitement and urgency or, alternatively, he could have been expressing negative sentiments.

During previous performances by this group, his signaling wasn't so pronounced, making all of this visually distracting, here and during the next two sets. While Smith probably just prefers to seek out the best possible performances, and it might have been better for the audience to close its collective peepers, it was ultimately desirable to forge ahead and concentrate on the sheer aural input.

Rather than approach his horn with a scattershot virtuosity, Smith is more of a post-Miles Davis architectural sculptor; a fulsome, brightly talkative bugler making bold statements in the air. Or down into the depths, as he frequently adopted the Miles-ian stance of pointing his sketches down to the stage floor, painting with confident strokes or decisive trills. Smith is a very different soloist, once his stylistic approach is set beside the aerobatic machine-gun excesses of Dave Douglas and Taylor Ho Bynum (the latter actually lurking within the ranks of Smith's soon-to-come Silver Orchestra). Lindberg delivered one of the best solos, employing his wah-wah pedal as a pronounced part of its semi-electric voicings. Once again, Smith hovered beside him, almost appearing as though he was calling a halt to Lindberg's self-expression. The final piece of the sextet set was "South Central L.A. Kulture," which stood apart from the preceding pieces due to its limber, muscle-toned funk, hinting at the repertoire of Smith's electric Organic combo, which would close out the concert. The acoustic instrumentation of the Golden Sextet didn't quite match this tune's inner nature—a contributing factor to its unpredictable excitement.

The middle set was a repeat performance of "Central Park," featuring vocalist Thomas Buckner. Premiered in New York City in late 2010, Buckner wasn't required to completely dominate the piece, as his contribution mostly seemed to inhabit an equal space with the collective instrumentation, occasionally rising above the mass, but never dominating. Smith's Silver Orchestra also played his "Africana 2" violin concerto, allowing for a flamboyantly citrus-stringed display by Jennifer Choi, and gave a global premiere of "Occupy The World For Life." This newest piece was more directly robust than the other two works, doubtless eager to express its message without any digressions. Smith's writing for a new music lineup successfully combines the tone and structure of a modern classical composer, but with a smoothly integrated free jazz sensibility; there were, after all, three drummers in the ranks. When reeds man Marty Ehrlich took his solos, they were amongst the most gripping and wild-spirited of the night, even more effective for being surrounded by a precisely-formed sonic architecture.

To complete this highly diverse collection, Smith closed out the evening with Organic, his mostly electric combo. Its template could be described as descending from early 1970s Miles Davis fusion and a more earthy, groove-some manifestation of Ornette Coleman's Prime Time. The ingenious lineup featured three simultaneously soloing electric guitars, and electric bass, with Lindberg also remaining, having already revealed his inner electric spirit on the acoustic upright. The deliberate tactic of including acoustic pianist Angelica Sanchez and cellist Okkyung Lee was also calculated to unbalance any sonic complacency, though the latter revealed a harshly amplified ferocity during her arrestingly scything solo stretch. Each guitarist—Michael Gregory, Ben Tyree, Lamar Smith—rose periodically to an ascendant position, providing a highlighted solo, only to recede to allow another's expression. The music would have had an even greater effect in the closer surroundings of a club, with more brutal amplification, but then maybe the piano/cello extensions would have been subsumed. As it was, the power of a lower-volume fuzzing still held great authority.

Even though cornetist Taylor Ho Bynum was debuting new compositions, this majestic gig was notable principally for the searing quality of his band's high-wire solo work. The two sets celebrated the release of Apparent Distance (Firehouse 12, 2011), with the first effectively running through this new suite. The leader himself made the earliest impression with a completely solitary display of trapeze-style daring, ripping to the limits of his horn's range, whilst maintaining a complete control during high velocity pepper spraying.

Several stretches of a more communal nature were led by the repetitive cyclings of drummer Tomas Fujiwara and guitarist Mary Halvorson, pulling out thick wedges of melodic gristle. Indeed, one of Fujiwara's most striking solos revolved around the extremity of insistent minimalism, making his eventual breakout into splashing, polyrhythmic detail all the more startling. The stunning frontline was completed by alto saxophonist Jim Hobbs and bass trombonist Bill Lowe, neither of them caught too often in NYC.

With Bynum brandishing the weapon of sheer surprise, it was impossible to pick favorites amongst the horns. In turn, they proceeded to deliver a succession of astounding solos that passed through virtuosity, imagination, humor and extremity. At one stage, Hobbs set out to emulate a bagpipe from the Cretan shepherding mountains—or was it simply an alto arriving straight from a Balkan wedding party?—his fingers fluttered as one, whilst he vibrated the atmosphere in an extended ritual of goat-skinned trancing. During another notable solo, Hobbs was again rampantly expressive, brutally escalating his vibrato-laden phrases on an asymmetrical pathway. Lowe (also a tubaist) sounded almost conventionally jazzy following this, but absolutely anyone would, post-Hobbs. Lowe wisely took the lower path, his very being emanating garrulous creativity.

Arriving close to the year's end, this was a serious contender for one of 2011's very best gigs.