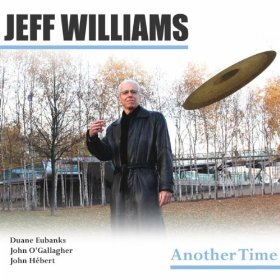 Drummer Jeff Williams' affiliation with New York City's fabled loft scene, amid stints with saxophonist Dave Liebman's revered 1970s band Lookout Farm, is but one highlight of a sprawling career positioned in numerous jazz-based platforms. On this quartet date, featuring an impressive supporting lineup, Williams draws a paradox of sorts via subtle complexities often filtered through modern mainstream and off-kilter thematic ventures. His crafty use of space decrees a purer concentration on soloing activities; unhurried, but deterministic, the artist's uncanny sense of time steers a path through rolling hills, abrupt detours and climax-oriented parts, consisting of bop and odd-metered cadences.

Williams is a masterful artist who dances, propels, and tap dances across the kit, while dropping a few polyrhythmic bombs along the way. His deft brushwork on the undulating and relatively temperate "Purple, Blue and Red" generates fluid support, the band sporting a classic Miles Davis quartet tone without becoming pigeonholed in convention.

With trumpeter Duane Eubanks' bronzy phrasings and bluesy modulations, the music signals an after-hours aura. Yet, the moving parts intimate a throttling framework, founded on subtle bop lines and a curvy soundscape. It's a re-energizing process that remains consistent throughout the program. But there isn't much in the way of catchy harmonies on Another Time