Bobby Naughton is self-taught as a performer and composer. After playing piano in rock-and-roll groups he took up the vibraphone in 1966, and in the late 1960s played with Perry Robinson, Sheila Jordan, and others. He continued to work intermittently with Robinson while recording as a leader on his own label, Otic; in 1971 he wrote a score for Hans Richter's silent film Everyday (1929). He played with the Jazz Composers Orchestra in 1972 and Leo Smith (from the mid 1970s), and joined the Creative Musicians Improvisors Forum in New Haven, Connecticut. Naughton's vibraphone playing, like that of Gunter Hampel, emphasizes the instrument's role in group improvisation rather than its possibilities as a solo vehicle. He plays fluently with four sticks, exploits the vibraphone's overtones, and sometimes controls manually the instrument's vanes (which vary its sound intensity). His piano playing (which may be heard on the first of his own albums) has a melodic strength and terseness reminiscent of Paul Bley. Roger Dean, The New Grove Dictionary of Jazz, copyright Macmillan Reference Ltd. 1988

Read more articles
"Naughton has an uncanny ability to listen to and play off and with his sidemen." Fernando Gonzalez, The Boston Globe

"Naughton's something else." Nat Hentoff, The New York Times 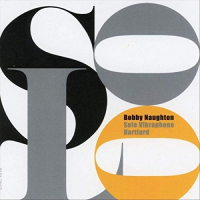 All About Jazz musician pages are maintained by musicians, publicists and trusted members like you. Interested? Tell us why you would like to improve the Bobby Naughton musician page.