By Mark Corroto
September 5, 2017
Sign in to view read count 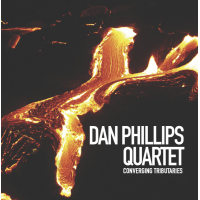 Sorry New York, but Chicago jazz hits harder. And maybe it always has, with players like Gene Ammons, Von Freeman, Fred Anderson and today's stars, Dave Rempis, Frank Rosaly, Hamid Drake, and Fred Lonberg-Holm, to name just a few musicians. Maybe it is the winters, or is it the searing heat of summer that mutates the DNA? Whatever the cause, once altered, the musical whomp is fixed. Even when the musicians have left the Windy City, its influence remains. A prime example is Converging Tributaries by guitarist Dan Phillips' Quartet.

Phillips works as an educator in Bangkok, Thailand, returning to Chicago to record excellent sessions such as this. The same holds for trombonist Jeb Bishop, a North Carolina native whose tenure in Chicago saw him performing in Ken Vandermark's various projects, Peter Brötzmann's Chicago Tentet, and Mike Reed's People, Places & Things. Polish-born Bassist Krzysztof Pabian studied both the classical and jazz realms, played with a symphony orchestra and, as he does here, kept time in Phillip's composed pieces and the group's free improvisations. Lastly, Tim Daisy is, and seems to have always been, part of every improvised happening in Chicago these last twenty years.

Of the four pieces here, two are Phillips' compositions and two are group improvisations. The only difference is in the lengths of the tracks. The freely improvised pieces, "Swirling Headwaters" and "Latent Entropy" clock in at 18:36 and 26:46, respectively, while "Conspicuous Con" is 10:58 and the title track, 9:30. The reason I cite this as the only distinguishing detail is that the four players engage so well, the improvised pieces are easily mistaken for thoroughly composed music. Or is it that the compositions open up so nicely to improvisation?

"Conspicuous Con" opens the disc with the musicians circling each other, juggling melodic notes until they settle into a profound (can we say "Chicago"?) groove. Phillips picks notes over a hypnotic bass line before Bishop exorcises a few trombone demons. A similar submission to swing is found on the title track with Daisy playing with a surprising economy, and Pabian's bowed bass coloring the affair. The two improvised pieces are evidence of four musicians listening and reacting to each other with generosity. The sound is coherent, coordinated and is what we might dub Chicago organic.