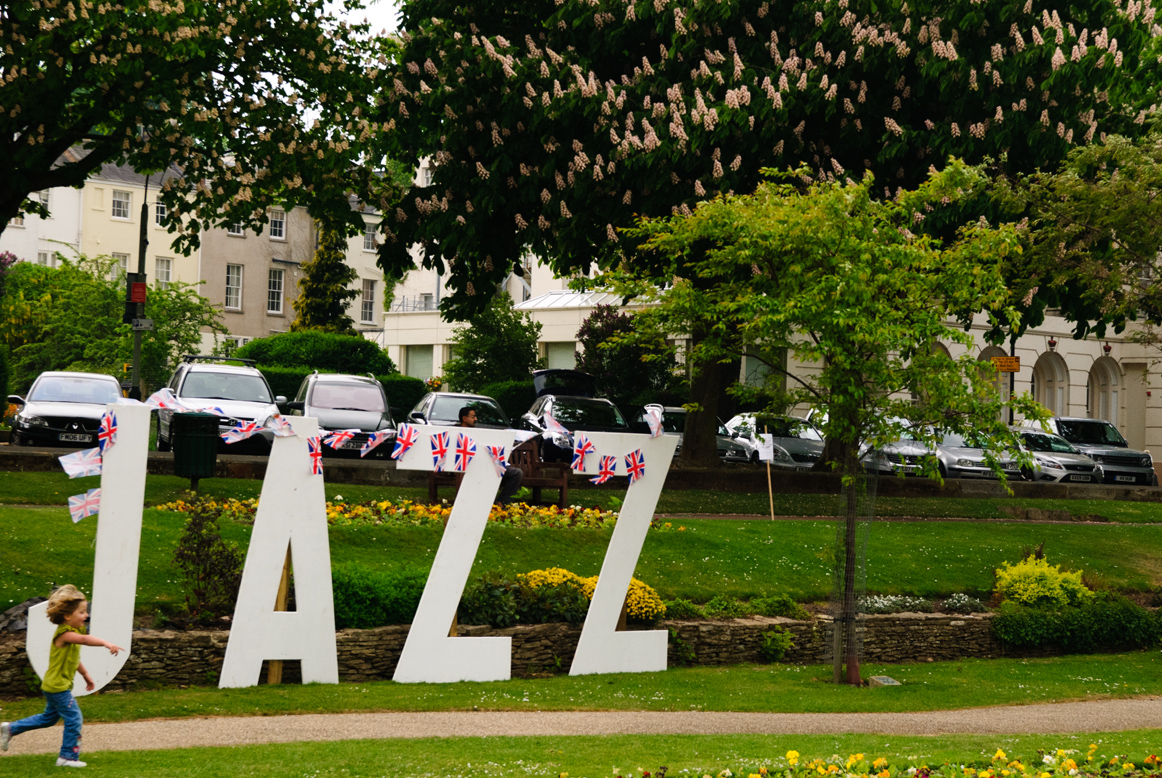 By Bruce Lindsay
May 13, 2011
Sign in to view read count
Cheltenham Jazz Festival
Cheltenham, England
April 27-May 2, 2011
The Cheltenham Jazz Festival, now in its sixteenth year, is one of the more eclectic of British jazz festivals, this year featuring major jazz figures such as vocalist Dame Cleo Laine and singer/pianist Jamie Cullum, cutting-edge bands like Outhouse and Curios, and throwing in a few surprises along the way. Its working definition of "jazz" is an inclusive one, finding space for R&B, blues and hip-hop as well. Cullum's role as guest director for the second year also helped to ensure a diverse program, as did a link with the Norwegian Embassy that helped to enable the presence of players such as pianist Tord Gustavsen.

The festival takes place in a range of venues around Cheltenham, a spa town in the west of England, including an outdoor free stage and the jazz arena—a large and well-appointed marquee—both of which were set up in the Imperial Gardens. The Cheltenham Town Hall provided two venues, while the nearby Hotel Du Vin played host to three lively and energetic jam sessions into the early hours. The Gardens also housed a range of bars, food stalls and shops, including a well-stocked record and CD tent with a classy selection of jazz on vinyl.

Cheltenham's place in the top division of jazz festivals has been assured for some years and means that it gains sponsorship from Arts Council England, BBC Radio 2 (the UK's most popular national radio station) and The Times, among others. The BBC's involvement meant that the festival received widespread coverage, with the Friday night Town Hall concert featuring guitarist Martin Taylor and singer/keyboardist Georgie Fame being broadcast live as an edition of the Radio 2 show Friday Night Is Music Night. Another media link meant that Cullum's Sunday night concert was shown live in over 75 cinemas across the UK and Europe. This is the kind of media coverage that most jazz festivals would envy. Cheltenham deserves it, for it is one of the most innovative of British jazz festivals, as well as one of the best-organized and friendliest.

With almost 50 concerts, plus jam sessions and free stage performances, it's a busy festival with many events taking place in parallel—most evenings saw three or even four events taking place at one time—decisions had to be made. Would it be the big names, the newcomers, the improvisers, the combined dinner and concert evenings, the jazz-and-science or the jazz-and-comedy? The mix of old, new, familiar and unfamiliar, paid off with some memorable gigs.

James Hunter opened the Jazz Arena with a sold-out show to an enthusiastic audience of R&B fans. Hunter has been a popular draw on the European festival and club circuit for two or three decades—originally performing as Howlin' Wilf. This is good-natured, good time R&B with the occasional hint of reggae, delivered by a slick sextet. Hunter was a great front-man, assured, funny and with an authentic vocal sound that is ideally suited to his band's '50s and '60s inspirations. Most of the tunes were Hunter's own compositions, but there were also a few covers, including a shuffle-beat version of "Think"—made famous by James Brown—and a Bo Diddley number, "Dearest," originally recorded by Mickey and Sylvia. 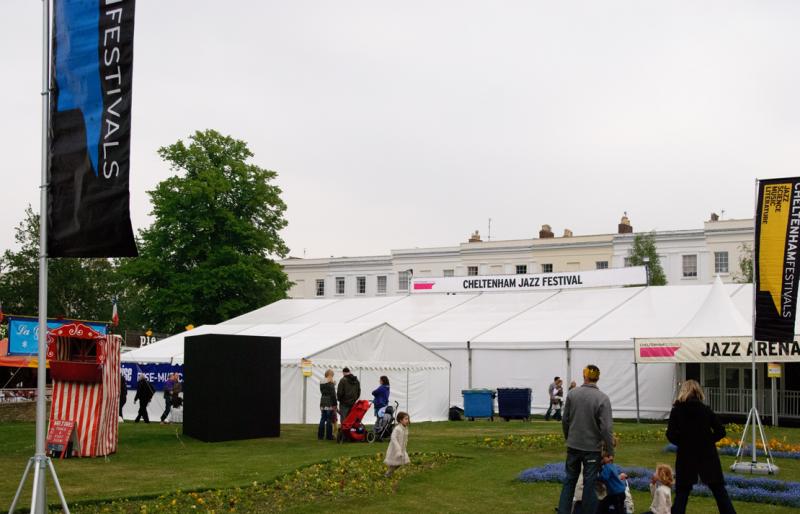 Kyle Eastwood also took to the Jazz Arena stage, delivering a stylish set that was well-paced and immediately accessible. Most of the set was devoted to the bassist's 2011 album Songs From The Chateau (Candid Records), including "Marciac," "Soul Captain" and "Tonic." Eastwood, who switches between electric and acoustic instruments with ease, has a confident and friendly stage presence. The highlight of the set was his duo performance with pianist Andrew McCormack, of the theme from Clint Eastwood's 2006 film Letters From Iwo Jima, a beautifully controlled display of musicianship from both men that kept the audience hushed.

Not to be outdone by these (relatively) young players, the old guard made some emphatic musical statements themselves. The Friday night performance by Pharoah Sanders was eagerly awaited by many festival goers, and despite a shaky start, he didn't disappoint. The veteran tenor player was resplendent in a sparkling gold shirt and played a brightly-shining gold saxophone. Initially there were problems with the monitors and he was seemingly uncomfortable with the quality of the on-stage sound. He played only a few bars of "Giant Steps" before wandering off stage, leaving his superb trio—Jonathan Gee on piano, Mark Hodgson on bass and expatriate American Gene Calderazzo on drums—to carry on without him. Thankfully the problems were temporary and his confident performance on "Naima" highlighted his famous tone, feeling and control.

After that, Sanders seemed noticeably more relaxed and was moved to add a brief but high-energy vocal, declaiming "I got the blues" with a smile. His versions of "My Favorite Things" and "A Nightingale Sang In Berkeley Square" that followed were highlights of the festival, not just the set, as he crafted some emotionally charged music that closed the evening to rapturous applause. 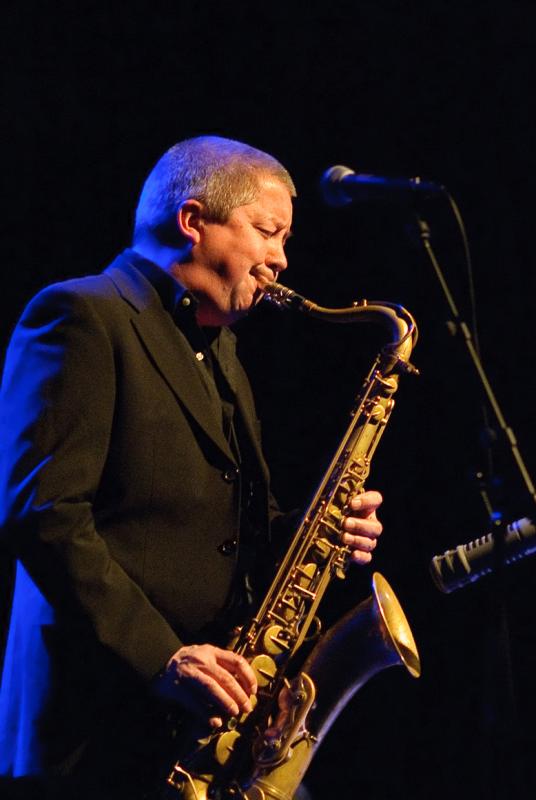 While Sanders clearly demonstrated the talent and flair of the older generation, and Eastwood, keyboardist Django Bates and singer Liane Carroll showed what established players can do, there was plenty of ability and imagination on display from the younger generation. The members of Trio Libero hardly qualify as Young Turks: saxophonist Andy Sheppard (pictured left), bassist Michel Benita and percussionist Sebastian Rochford are all internationally known musicians, but Trio Libero is a new ensemble with an as-yet-untitled debut album due out on the ECM label later in 2011, and its music was being heard for the first time by most of the audience in the Town Hall main stage. The trio's music was refined, thoughtful, yet engaging and good-humored. All three members are exceptionally fine musicians but on this day, it was Benita's flowing, heartfelt bass grooves that stood out, whether on ballads such as "Living On The Stars" or the more up-tempo, bop-ish, "Rubber Necking."

The upcoming generation created a buzz throughout the weekend. In some cases they did so by playing with established stars—trumpeter Jay Phelps and clarinetist Shabaka Hutchings in Django Bates' The T. D. E.s for example—and in other cases they did it on their own. Outhouse, with guest guitarist Hilmar Jensson, weren't ideally served by a midday performance slot but the band delivered a strong set that showcased the superb drumming of Dave Smith on tunes such as "Kitchen in the Middle" and "Bleak Sylvette" from Straw, Sticks And Bricks (Babel, 2011). Jensen's own "Uncle Fishhook" gave the band the chance to stretch out with some fine ensemble playing.

Jazz-and-comedy was provided by the Horne Section, the brainchild of standup comic Alex Horne. There is a fine British tradition of combining jazz and comedy, stretching back to the Temperance Seven and the mighty Bonzo Dog Doo Dah Band, that respects the music while not being afraid to emphasize some of its more unusual elements. It helps to have a band that knows its jazz chops, too: this group includes pianist Joe Stilgoe, bassist Will Collier and drummer Ben Reynolds, so when Horne drove it through a rapid musical demonstration of key terms from the jazz glossary, the band was more than a match for his exhortations to "walk the bass," "take it to the bridge," "break it down" or "give us some free jazz."

There was also some great performance poetry from Tim Key and a brief, rather befuddled set from comedian and TV presenter Simon Amstell. There was audience participation too, but as much of that involved this reviewer, this reviewer's socks, and a song in praise of his bald head, the impact of such comedy gold is hard to deal with subjectively. 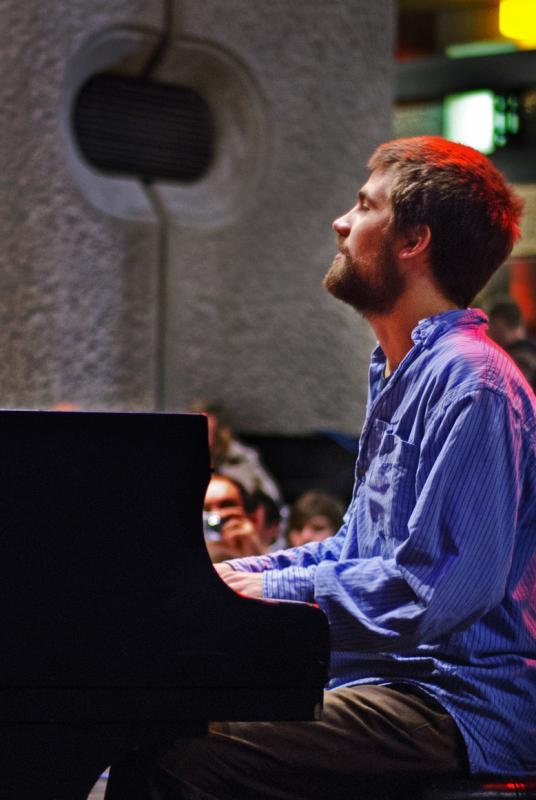 A combination of jazz and science brought the Cheltenham Jazz Festival one of its most innovative, and well-received, events. Animation Migration was a joint venture between the Cheltenham Jazz and Science Festivals, which aimed to explore ideas of evolution through music and visual art. Dr. Adam Rutherford, an academic and BBC TV presenter, provided the science; pianist Kit Downes (pictured right) wrote the music; animator Lesley Barnes, who created the gorgeous cover art for Downes' Quiet Tiger (Basho Records, 2011), produced the lively and colorful 15 minute animated movie.

The project was sponsored by the Wellcome Trust, a leading medical research charity and not the usual source of support for a jazz event. The audience, a high proportion of which was under the age of 14, was keen to learn about the science but also enjoyed the music and film. Downes' music was realized by a quintet of leading young musicians, including his trio's regular members, drummer James Maddren and bassist Calum Gourlay. James Allsopp was particularly effective in creating the sounds of rampaging dinosaurs with his bass clarinet. The work proved so popular with the audience that after a short question-and-answer session, the entire piece was shown and performed again—a rare and well-deserved example of an encore that lasted as long as the original performance.

It is festival director Tony Dudley-Evans' willingness to take a few risks that makes Cheltenham one of the best jazz festivals around for an audience that's ready to explore new music. Headline act Hugh Laurie—star of House and a talented singer and pianist—was an inspired choice of Big Name for the closing night, proving to be a great critical and popular success despite the misgivings of some of the UK's jazz community. But the music that is likely to live longest in the memories of many festival-goers will come from lesser-known names, often in new and unfamiliar groupings that may never perform together again. And, of course, that song about a man's bald head.