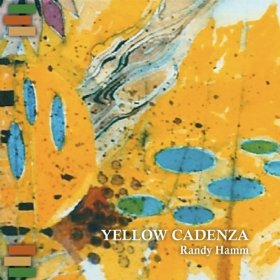 If Randy Hamm's Yellow Cadenza doesn't encompass enough musical goodies to suit many tastes, it's not for lack of trying. Hamm, a talented saxophonist who has spent more than a decade teaching at Missouri State University, introduces himself (on alto) by way of a lush ballad ("Here's That Rainy Day") complete with string section before settling into a more straight-ahead groove on his own compositions, "The Oath," "52 Short," "Port 54" and "Second Wind."

The strings return on "My Romance" and "In the Wee Small Hours of the Morning," Hamm welcomes vocalist Christin Bohrisch (also with strings) on Bronislau Kaper's "Invitation" and Brooks Bowman's "East of the Sun," and moves to soprano sax on his own "Portrait of Shari" (Mrs. Hamm) and Garry Dial's "Too Much Is Just Right." If nothing else, the frequent changes in mood and tempo are engaging and prompt an eagerness to hear what comes next.

Staying the course provides ample rewards, starting with Hamm's bright and dexterous alto solos and including impressive statements by trumpeter Allen Beeson, pianists Kyle Aho or Ken Kehner (Aho on "The Oath" and "Port 54," Kehner on "52 Short" and "Second Wind") and drummer Martin Morrison. The trick is to get past "Rainy Day," which suggests this may be just another syrupy alto-with-strings session—which, truth be told, is partly but not entirely the case.

If one of Hamm's goals was to show his versatility as a player and composer, he has made his point. Beyond that, he has produced a commendable album that is easy on the ears and gratifying to the senses.

Here's That Rainy Day; The Oath; 52 Short; Invitation; Port 54; In the Wee Small Hours of the Morning; East of the Sun; Second Wind; My Romance; Portrait of Shari; Too Much Is Just Right.