By Jeff Dayton-Johnson
November 3, 2010
Sign in to view read count 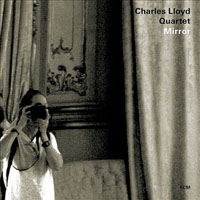 Saxophonist Charles Lloyd's current artistic output is often depicted as a heartwarming comeback after years of silence. It is certainly true that his recent string of albums for ECM has brought him commercial and critical success even greater than the plaudits that attended his renowned, hippie-tinged 1960s quartet featuring pianist Keith Jarrett and drummer Jack DeJohnette. But this narrative interpretation is awkward, given that the "comeback," beginning in the early 1990s, has now arguably lasted longer than his heyday and his dormant period put together. Not to mention that he never really faded from sight altogether.

Nevertheless, it's an appealing story, and Lloyd himself, probably without meaning to, tends to contribute to its acceptance. And he does so in two ways. First, most of his ECM records exhibit a self-conscious freshness in conception and execution, delivered with cool and casual mastery: he comes across as a Comeback Kid, someone who simultaneously feels he has something to prove, even if he knows he shouldn't have to at this stage in his career. Second, the organization of these albums tends toward the autobiographical—a curriculum vitae of his past career, a calling card offered to a world that might have forgotten him.

Revealing details are everywhere. Take the lovely Beach Boys' "Caroline, No," an album cut from their pop masterpiece Pet Sounds (Warner Bros., 1966)— this too is autobiographical, as Lloyd worked as a session musician with the Beach Boys. Lloyd's reading is sleek and sunny and built around the brief but beautiful moment of melodic and harmonic magic when the Beach Boys sing "did" and "took" in the lines "Where did your long hair go?" and "Who took that look away?"

In fact, Lloyd's performance suggests that this flourish by Beach Boy Brian Wilson sounds practically Thelonious Monk-ian. The parallel is encouraged by following "Caroline No" with a rendition of "Monk's Mood." This in turn is bested a few tracks later by Monk's "Ruby My Dear," lovelier still, uncovering a profoundly deep soulful beauty, much as saxophonist David Murray did with his versions of "I Want To Talk About You." (Murray, like Lloyd, is indelibly influenced in this regard by John Coltrane.) Pianist Jason Moran offers a thoroughly un-Monk-like solo, among his most soulfully intelligent on the record.

That Monk's melodies are so impossibly, achingly beautiful is scarcely a secret, and the profound soulfulness Lloyd uncovers here was not too far beneath the surface to begin with. But his capacity to reawaken this loveliness in performance is evidence of artistic skill; indeed, it is an almost spiritual endeavor for Lloyd.

Lloyd's quest for fresh expression is aided by his youthful band, particularly pianist Jason Moran. Moran touches a lot of thematic and stylistic bases on this disc, just as he did on Lost In A Dream (ECM, 2010), recorded around the same time with drummer Paul Motian and saxophonist Chris Potter; but here Moran's multifaceted playing has a kind of coherence it lacked on the Motian-Potter record, attributable probably to the greater musical cohesion that Lloyd's larger conception lends to the project overall.

New readings of older items from the Lloyd songbook together with jazz standards and spirituals, provide once again a catalogue of Lloyd's career in the span of a single compact disc. "Being and Becoming," for example, from the poignant and odd set of duets with drummer Billy Higgins (who played some kind of violin on this particular track) entitled Which Way Is East? (ECM, 2004) sounds entirely new with the harmonic elements added by the inclusion of piano and bass. The title cut, meanwhile, is given a sunny, breezy, early-1960s interpretation, and drummer Eric Harland approaches the tune much as Tony Williams might have in the classic 1960s quintet led by trumpeter Miles Davis.

Lloyd sounds more like John Coltrane than ever. This is particularly the case of his fluttering, multiphonic approximations of Coltrane's "sheets of sound," alternating with bold declarations of major melodic themes; but also in his use of the soprano instrument to suggest heavenward spiritual longing and the general spiritual motivation for the music overall (as on "Tagi," another reprise from Which Way Is East?, and which features gentle chanting). The Coltrane tag has been hung round Lloyd's neck now for decades, and with any other musician, the comparison would be pejorative, suggesting an inability to escape from the earlier master's shadow. But in Lloyd's case, the observation is a tribute to his capacity to assimilate Coltrane's musical lessons into his own identity, much as saxophonist Coleman Hawkins did with the legacy of trumpeter Louis Armstrong. You need only listen to the version here of "Ruby My Dear" alongside any of Coltrane's versions of the same composition: this is an instructive comparison that makes clear just how much Lloyd has taken from Coltrane—and how much he has added.

Coltrane, Monk, Hawkins, Armstrong: pretty heady company. The jury is still out on whether Lloyd belongs in that host. But Mirror, in the meantime, is a mature and satisfying work that legitimately raises such comparisons. Long may this comeback last.

Tracks: I Fall in Love Too Easily; Go Down Moses; Desolation Sound; La Llorona; Caroline, No; Monk's Mood; Mirror; Ruby, My Dear; The Water is Wide; Life Every Voice and Sing; Being and Becoming, Road to Dakshineswar With Sangeeta; Tagi.