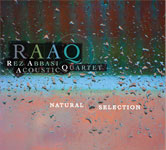 Profound spirituality and soulfulness is not a quality associated with secular music. However, once in awhile, even secular music reaches levels of such ecstasy that these elements become entwined in the heart of its melody and harmonic changes, as well as its iterant rhythm. Less often, this fusion is found at the confluence of mystic rivers of sound, where the myriad cultures of the world collide. Civilizations as ancient as Egypt, India and China have long held music in crucibles that have, for thousands of years, been beguilingly attractive to all those who follow the arts. This is not because of its shimmering undulations that Western eyes and ears see and hear in saffron curtains that tease the senses, but because spiritual and secular seem to meet at infinity, like parallel lines that mesmerize, enticing ever onward to its beckoning horizon.

Somewhere in a crucible all its own the music of guitarist Rez Abbasi sings. Natural Selection is a miraculous collision of the world of the color and nuanced sound of the Subcontinent; the ululations of Middle Eastern "muwashas," traipsing across desert and mountain; and the near statuesque beauty of European impressionism, all wrapped up in the improvisatory idiom of jazz. It is natural selection, where all those useful elements have survived and become reborn in a brilliant new aesthetic wrought by a fertile mind, and the charming magic of fingers that flutter and glide over the guitar strings with riotous color, producing so vivid a music that it can almost be tasted, as it seeps into the secret recesses of the mind where pleasure is felt like pain. Despite the fact that he plays an instrument that many have excelled at—the acoustic guitar—Abbasi sounds like no one who has gone before him.

His guitar wails about unspeakable loss on "Lament," undulating and tearing down the chart with surprising, bending glissandos, as he recreates the masterful music of the prince of Sufi sound, the late Ustad Nusrat Fateh Ali Khan. And even Joe Henderson could not have imagined that his "Punjab" could be resurrected to fly in the face of genius from the strings of an acoustic guitar, playing off the echoes of the vibraphone. Abbasi's own creations are just that: sheer genius that rises out of murky, misty mountainous mornings, or crepuscular exchanges between his guitar and Bill Ware's vibes, as well as Stephen Crump's bass and Eric McPherson's percussion smatter. The composer posits that he heard this call-and-response in the music as it was being born. As a result, "Up on a Hill," "When Night Falls," "Bees" and "Blu Vindaloo" echoes with smearing and voice-like utterances in harmony, with the bronzed modulations of tubular bells that also echo with soulful grandeur. All of this, as the album's otherworldly character echoes long after the last notes have faded and died.