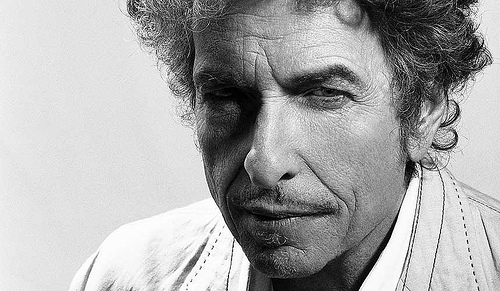 By DAN BILAWSKY
September 24, 2010
Sign in to view read count
Jazz and rock audiences, at their core, often expect two very different things when they attend a live performance. Jazz audiences thrive on the journey and in-the-moment magic that's created as a one-time-only occurrence, through a partially improvised art. Rock audiences, by and large, prefer to hear it like it sounds on the record. Jazz artists who play it safe at every performance don't usually earn respect from critics, fans and their peers, while rock artists who go out on a limb often end up alienating a segment of their fan base. Bob Dylan is one such artist.

Jazz and Bob Dylan are strange bedfellows, to say the least. Dylan's recorded output doesn't thrive on lengthy and impressive instrumental soloing, it doesn't rely on healthy doses of The Great American Songbook, it doesn't feature insane chord changes and extensions, and I seriously doubt anybody really wants to hear him scat. However, the art of improvisation does come into play, to the chagrin of some audience members, during his live performances. While Dylan always seems to include, at least, a couple of classics in his concerts, audience members can't always recognize them. Over time, the prophet of Hibbing, Minnesota has seen fit to take his tunes and bend them to his will, changing the structure, feel and phrasing of the music, to—occasionally—unrecognizable lengths. Is it jazz? No. Is it improvisation based on a structural pretext? Yes.

When Dylan goes out on a limb like this, night after night, he doesn't please everybody—and he doesn't always succeed—but he does prove to be a supreme artist willing to take chances...just like the musicians we admire most in jazz. I've attended two of his performances where things didn't connect, and a friend and co-worker of mine saw him perform and wryly stated that "Dylan sounded like Jimmy Durante on crack," but I've also attended a half dozen Dylan shows where his impeccable artistry won over everybody in the room—Dylan aficionado or not. While his catalog hasn't been mined to the nth degree like the naturally jazz-friendly songs of Joni Mitchell, Dylan's music has crept into the repertoire and some notable artists have tackled his tunes over the years. With that in mind, this edition of Old, New, Borrowed and Blue will focus on Dylan covers and attempt to address the topic of Bob Dylan as the bard of jazz.

Nina Simone is viewed by some as a jazz singer, and some think of her as a soul singer, but others view her—like they view Dylan—as a singer of protest songs. When looking at her rich musical legacy, labels become irrelevant, but the performances live on. While she might best be remembered for songs like "Feeling Good," "Mississippi Goddam," "I Put A Spell On You" and "To Be Young, Gifted And Black," she also had a way with songs associated with more mainstream artists of the day, like The Beatles or Bob Dylan. Her version of "Just Like A Woman" greatly contrasted with Dylan's take—in instrumentation, feel and mood—but is just as magical.

While Dylan's famed recorded version of this song has an understated beauty to it, with his approach being simple in many ways, Simone's performance has greater depth and shows off her artistic range. After a short piano introduction, where Simone shows off her jazz chops, things settle in and a 12/8 drum groove controls the direction of the song. After Simone gets comfortable and delivers some bluesy vocals, a hint of organ finds its way into the mix, further upping the soul quotient here. As strings join in and the rhythm section builds with them, grandeur is the name of the game. Then, the intensity is pulled back a bit, so the song doesn't climax too early, and Simone follows suit as she rides her way through the rest of this soul-stirring performance. While Simone covered a wide range of songs and styles during her career, she had a way of making every song her own and this one is no exception.

Guitarist Bill Frisell was one of my prime entry points into the world of jazz, as I switched from a more rock-dominated listening perspective. While his musicianship, unique sound and captivating aural creations kept me spellbound and entranced, his genre-blind approach to cover material also appealed to me as a jazz-newbie. The fact that he could tackle everything from Sonny Rollins to Aaron Copland, and Charles Ives to Madonna—on a single album, the classic Have A Little Faith (Nonesuch, 1993)—was an attractive quality to a jazz neophyte like myself. That album also contained a choice cover of Bob Dylan's "Just Like A Woman," which was my first encounter with Frisell on Dylan. As I continued to delve deeper into Frisell's music and follow his new directions, Dylan kept popping up. I remember attending a performance where he delivered a searing take on "Masters Of War," but I was even more impressed when I heard his interpretation of "A Hard Rain's A-Gonna Fall." 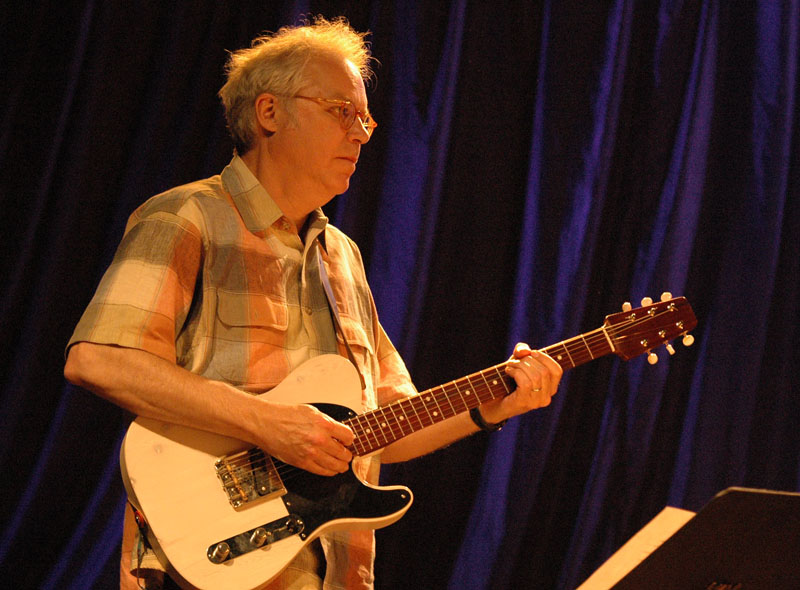 East/West (Nonesuch, 2005) is a two-disc album that presents a live set from Frisell's trio on the West Coast, performing at Yoshi's with drummer Kenny Wollesen and bassist Viktor Krauss, and an East Coast set at the Village Vanguard, with Wollesen and bassist Tony Sherr. While the Vanguard set includes some terrific songs, like "Goodnight Irene" and "The Days Of Wine And Roses," the Yoshi's set wins out with knockout versions of "Blues For Los Angeles," "Shenandoah" and the aforementioned Dylan classic.

Like many Frisell performances, "A Hard Rain's A-Gonna Fall" is formed from nothing. Frisell is a master at taking a single speck of sound and using is as the basis to build a powerful musical statement, and such is the case here. Little by little, he adds depth to his statements and once the song is recognizable—and the rest of the trio joins in—things really start to escalate. Krauss and Wollesen are both brilliant in their ability to perform in a more simple and streamlined manner here, allowing Frisell to take flight and soar.

While Frisell and Simone both put their marks on Dylan's music, a collective trio, featuring drummer Michael Vatcher, bassist Lindsay Horner and reed player Michael Moore, went one better and actually took their group name from Dylan's words. Jewels and Binoculars' name comes from the lyrics of his "Visions of Johanna" and, while their albums often fly under the radar, jazz fans who appreciate Dylan's music will find plenty to love on their recordings. This group began working their way through Dylan's vast catalog in the late '90s, and released a pair of albums on Moore's label—Ramboy Recordings. Ships With Tatooed Sails (Upshot Records, 2007) is their third album—which coincidentally features Frisell as a guest artist on three tracks—and the trio moved over to Horner's imprint for this project. Virtually every era of Dylan's career from his early years ("It's All Over Now, Baby Blue") through his late '90s career revival ("Cold Irons Bound") is represented on this CD, but my fondness for the music on the underappreciated Desire (Columbia, 1976) drew my attention to "One More Cup Of Coffee."

The Spanish tinge from the original is retained here, as Moore ably delivers the melody. While nothing can substitute for Emmylou Harris' passionate vocals and Scarlet Rivera's bewitching violin work from the original, here Jewels and Binoculars finds a way to make is work. Horner adds a buoyant bass line that has a bit of funk and a hint of Brazil in its genes. Vatcher's drumming adds a sly element to the music, and Moore becomes more inventive as the song continues. His second go-round features some clipped, staccato phrases, and he bends his pitches occasionally, providing some vocal-like inflections. Horner follows this up with a solo that gets away from the melodic material of the song, but still remains "in." Moore returns with another elegant play on the melody and things fade away to nothingness as the music vanishes.

Another all-Dylan album—and the newest recording mentioned in this column—is pianist Ben Sidran's Dylan Different (Nardis, 2009). Sidran's career has taken him all over the map, from rock to jazz, performer to producer, lyricist to composer and a million other things in between. While his connection to Miles Davis' "Nardis"—Sidran spelled backwards—and his claim to fame as the lyricist for Steve Miller's mega-hit, "Space Cowboy," are the two things that usually stick out in people's minds when discussing Ben Sidran, his artistry runs much deeper. With Dylan Different, Sidran managed to craft an album which leans toward rock, bears some genetic markers of jazz, but ultimately doesn't belong to any single camp. Sidran's vocals draw more attention than his piano work here, but both are key parts of this project. The production values on this album lean more toward a modern radio aesthetic than a pure jazz album and the horns round out these songs and add some nice touches, rather than becoming the focal point of the music. 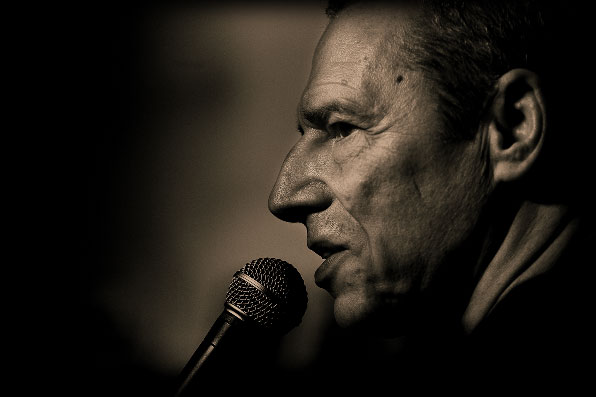 "Tangled Up In Blue" is one of the hippest tracks on the album and demonstrates Sidran's ability to get inside a song. The quirkiness of the opening seconds of the song gives way to an earthy, soulful sound that's built on a straightforward rock beat, hand claps, and Sidran's steady eighth notes on the piano. Little horn riffs pop into the music, never overpowering the vocals, and Amy Helm's wordless "ooh's" and other background vocals help add another element to the overall sound. While the drums never deviate from their course, the horns and Sidran add some funky instrumental touches to the overall sound. Throughout these dozen tracks, Sidran manages to pay homage to Dylan's work, while shaping the songs to his own liking. Like all the other artists here, Sidran manages to show Dylan differently, but it's still all about the music and lyrics from the one and only Bob Dylan.