Home » Jazz Articles » Rebecca Martin: When I Was Long Ago

Rebecca Martin: When I Was Long Ago 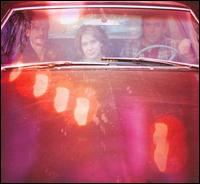 The immortal duets of vocalist Sheila Jordan with virtuoso bassists Cameron Brown and Harvie S, and with pianist extraordinaire, Steve Kuhn, now have a boon companion in Rebecca Martin's extraordinary trio album, When I Was Long Ago. Placing it with Jordan's legendary recordings is a must. The bassist on this session, FLY, is in fine form, stretching melodically, harmonically and rhythmically, just as Brown and Harvie S did for Jordan. The addition of saxophonist Bill McHenry adds a second voice to the whimsical Martin. It is not easy to play off Martin's emotional storytelling, which is tinged with tones of earthy penitential sadness, so McHenry adds his sun-peeping-from-the-dark-clouds voice when called upon, responding to Martin's raw emotion. The result is most extraordinary, absolutely delightful and thoroughly unforgettable.

Martin is a composer of considerable talent, approaching the repertoire that she serves up like a master-chef, creating rare and fine epicurean fare. Approaching older creations as a composer—which is how Martin views these charts—has given them, quite simply, a brand new life. The trio format must stand back from the spotlight, so that Martin's vocal gymnastics can take center stage, part of a visible minority of singers in her approach to song. Apart from inhabiting the characters in each of the songs she sings, Martin is able to let her emotions take control of her vocal chords. It is a talent that vocalists like Billie Holiday and only a handful of others possess. Martin's voice does not soar, but hovers hypnotically, barely above a whisper, like a dramatic monologue brought to life by a Shakespearean artiste in an epic tragedy. Her voice has wings, but is low-flying as it stirs the emotions of those who will give her an ear.

Thus, the extravagant visuals of "Wrap Up Your Troubles In Dreams" and "Willow Weep For Me" unfold in slow motion, in the dusky atmosphere of Martin's voice, increasing the songs' drama. More than anything, it is her spectacularly moody introductions to songs like "For All We Know" and "Someone To Watch Over Me" that set indigo shades and tones atop the charts that follow. That McHenry adds his expressive voice with slanted and wonderful shades, from the palette he brings to the song, makes them resonate with a newness that gives the songs a first-time feel. Grenadier might seem to hover in the shadows throughout, but he is far from invisible; with a tremendous sense of time and swinging harmony, he is often melodically inclined and, tantalizingly plays contrapuntal lines that beautify the melodies beyond the normal stretch of the imagination. His star turn on "Willow Weep For Me," as well as on several other charts, makes him a star, too.

This is gripping music from a star whose time has surely come, with the intriguingly beautiful When I Was Long Ago.

For All We Know; But Not For Me; Lush Life; No Moon At All; Charlie Sings; Cheer Up Charlie; Low Key Lightly (Lucky In Love); Wrap Up Your Troubles In Dreams; Someone To Watch Over Me; I Don't Know What Time It Was; Willow Weep For Me.

Title: When I Was Long Ago | Year Released: 2010 | Record Label: Sunnyside Records