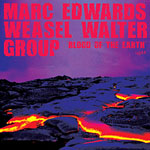 Double drummer-led free jazz sessions come with a price, and both aural and contemplative muscles need to be flexed. With Blood Of The Earth, from drummers Marc Edwards and Weasel Walter, the challenges for immersion in a sonic concentration of spontaneity and stamina.

But this is not your father's retread of John Coltrane's Ascension (Impulse!, 1965). The two drummers have taken the 1960's concept of freedom as starting point and fired their rockets way past the stellar regions.

Edwards—a former member of bands by Cecil Taylor, Charles Gayle and David S. Ware—teams with Walter, founder of founded the Flying Luttenbachers and whose music bridges jazz and hardcore. Only saxophonist Darius Jones is retained from Edwards and Walter's previous disc, Mysteries Beneath The Planet (ugEXPLODE, 2009); this 2009 session also features trumpeter Forbes Graham, firebrand saxophonist Elliott Levin and bassist Adam Lane, who might be the only anchor holding this group from levitation.

The sextet sustains two tracks of 32 and 27 minutes each, with only a few passages of respite. The incessant nature of this music acts like a shot of espresso to an ADHD (Attention-Deficit Hyperactivity Disorder) sufferer. The power and pulse is actually calming, once inside the music. The ebb and flow of energies and solos compliment the rawness with occasional serene passages, but it's just the calm before the coming storms.