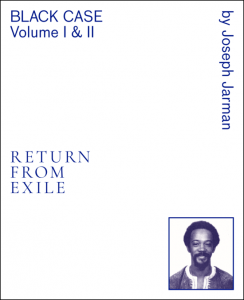 The welcome reappearance after over forty years of a lost treasure of the Black Arts Movement, written by the Art Ensemble Of Chicago's Joseph Jarman. Black Case Volume 1 & 11: Return From Exile was self-published in 1974 and a second, revised edition was published by Art Ensemble of Chicago Publishing Co. in 1977. Blank Forms Editions / After : Still's reissue is for the most part a facsimile of the later edition.

Jarman, who passed in January 2019, wrote the text over several years before collecting it in book form. Some of it is written in verse, some in prose. There are photos, most of which Jarman took himself, and texts from Art Ensemble event programmes. Much of the focus concerns Jarman's championing of what he and the band dubbed Great Black Music and his belief in music as the healing force of the universe. As much deals with African American history and self-determination moving forward. Jarman's interest in Buddhism and his practice of Aikido, both of which he was involved in from the late 1950s, are other recurring references. A few sections, most notably the poem "El Paso," read rather like Jack Kerouac's 1957 novel On The Road with an admixture of the experience of white racism—after he left the US army in 1958, having served in southeast Asia, Jarman spent several years criss-crossing the US and Mexico in search of himself. Other passages, such as the heartbeaking poem "We Were Fifteen," deal with William S. Burroughs-like candour with heroin.

Some of the poems, such as "Non-Cognitive Aspects of the City" and "Odawalla," will be known to fans of the Art Ensemble, incorporated as they were in the band's performances and recordings. The text contains frequent references to black musicians and writers including John Coltrane, Charlie Parker, Ornette Coleman, Muhal Richard Abrams, Leroi Jones (Amira Baraka) and Amos Tutuola, the Nigerian author of the 1954 novel My Life In The Bush Of Ghosts, a big influence on Jarman.

The reissue, published in a limited edition, contains a foreword by Jarman's longtime friend, the writer Thulani Davis, and an introduction by Brent Hayes Edwards, author of Epistrophies: Jazz and the Literary Imagination (Harvard University Press, 2017). The reprint is enthusiastically endorsed by Jarman's Art Ensemble colleague Roscoe Mitchell. It is the real deal and any fan of Great Black Music will find a rich vein of information and stimulation between its covers.