Gene Clark: No Other Deluxe Edition

By Doug Collette
December 21, 2019
Sign in to view read count 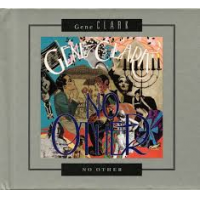 The range of packages available in the reissue campaign devoted to the late Gene Clark's No Other (Asylum, 1974) mirrors the evolution of fascination with the former Byrd's fourth solo album. The progression is almost linear from single vinyl and compact disc to deluxe and super deluxe editions and encompasses a protracted sequence of events: beginning with the initial dismissal of the record when first issued to a burgeoning word of mouth over the forty-five years since, the process that now takes the form of breathless hyperbole in more than a few instances.

But the tipping point of this phenomenon may well have been the 2003 release of an expanded double compact disc version of this album. Without exactly rendering that title obsolete, this more recent two-CD set achieves the same end through its inclusion of bonus tracks (not all of which are the same as the other's) sans the extravagance adorning the initial eight tracks Clark fashioned with producer Thomas Jefferson Kaye. Even as the lush baroque approach seems less of an aberration than a logical extension of the earlier influence of The Beatles on early tunes of The Byrds such as "She Has A Way," these stripped-down arrangements represent a more natural progression of the respected singer/songwriter's fusion of country music with rock and roll, extending back to work with the Gosdin Brothers and Doug Dillard.

The original version of No Other almost literally smothers Gene Clark's persona as it evolved following his departure from that aforementioned iconic American group. And it isn't so much that strings, horns and vocal accompaniment actually appear on numbers like "Life's Greatest Fool," but that such lavish settings are used so often. In stark contrast to the understatement and restraint Clark and Kaye utilized in their second collaboration three years later, Two Sides to Every Story (RSO, 1977), on this initial foray, the two would seem to have encouraged each others worst instincts, creatively (and quite possibly otherwise): the clutter of over-production, epitomized by the overuse of the chorale on the previously-referenced opener, had a corollary and equally adverse impact on the composer's use of alternately easy and forced rhymes in the song's lyrics.

Still, what sounds like metaphysical mumbo-jumbo there and within the extravagance of arrangement on songs like "One True One" becomes more akin to the ruminations of a man with history to draw upon and learn from in a spare setting. "Some Misunderstanding" reaffirms an image of Gene Clark as a solitary soul, often forlorn but ultimately resolute when he sings "But doesn't it feel good to stay alive?" Such words, as well as the forthright vocal delivery, gain resonance in the context of the man's often troubled and ultimately tragic life and death, an effect echoed by the musicianship of a compact core ensemble of accompanists: tracks like "Strength of Strings" reinforce the mood of the song(s)' as players of great pedigree, including keyboardist Craig Doerge and guitarist Jesse Ed Davis (who produced Clark's intimate White Light (A&M, 1971), have a chance to improvise, at least to some extent.

Such instrumental intervals, however, are too often submerged below the mammoth charts of, for instance, "Lady of the North" on the formal release, so it only makes sense the contrast presented in this alternative rendering, as with its earlier counterpart, would spark an equal measure of curiosity about and captivation with the album. Of course, the multiplicity of perspectives affords the benefit of the doubt to those making the case for the album as a profound work of art, not to mention the formulation of the multi-media Super Deluxe set including SACD's, a hardcover book and a DVD documentary .

The two compact discs packaged within these smaller hard-bound covers, between twenty-eight pages of extensive prose and annotation plus a wide array of photos (some picturing Clark in decidedly suspect poses), might well suffice otherwise. This set clarifies through direct comparison instead of muddying the perceptions with an overload of content. While Byrds historian Johnny Rogan's essay depicts the sequence of events by which the album came to fruition, accurately placing the project in the context of the Gene Clark's career large—and correctly assigning the multiple times Clark came close to receiving the acclamation he deserved—the British scribe's language is uncharacteristically hyperbolic; intentionally or not, it's a reflection of the production values of No Other, not to mention much of the current grandiloquence attached to it. The writing by The Long Ryders' titular leader Sid Griffin, who co-supervised the collation of the music from various sessions here, is appropriately more pithy (which is, in itself, a distinct departure from his flowery prose he composed as the foreward of the 2003 issue).

Still, if what seems like overblown attention to this title eventually engenders comparably expansive revisits of Gene Clark records more closely aligned with his eclectic roots—Roadmaster (Ariola, 1973) is a most apt candidate—then poetic justice would surely be served on behalf of a man who earned such recognition.

CD 1: Life’s Greatest Fool; Silver Raven; No Other; Strength Of Strings; From A Silver Phial; Some Misunderstanding; The True One; Lady Of The North. CD 2: From A Silver Phial; Silver Raven; Some Misunderstanding; Life’s Greatest Fool; 5 Train Leaves Here This Morning; Lady Of The North; he True One; Strength Of Strings; No Other.