Home » Jazz Articles » Mette Rasmussen/Chris Corsano: A View Of The Moon (From The Sun)

Mette Rasmussen/Chris Corsano: A View Of The Moon (From The Sun) 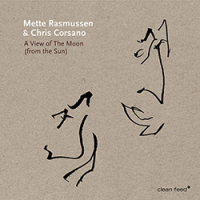 Both Danish saxophonist Mette Rasmussen and American drummer Chris Corsano thrive on exposed situations. No strangers to solo concerts and recordings, they are equally adept at duo experiences. A View Of The Moon (From The Sun) constitutes their second pairing after All The Ghosts At Once (Relative Pitch, 2015), and once again they share a predilection for timbral exploration laced with good old-fashioned blow outs.

Corsano boasts a resume taking in stints will such illustrious saxophone collaborators as Paul Flaherty, Evan Parker, Rodrigo Amado, Joe McPhee and Steve Baczkowski, so there's little that phases him, while Rasmussen is one of the most exciting up-and-coming reed players at the crossroads of free jazz, improvisation and noise. They both know how to pace themselves and don't go for glory all the time, and consequently hold the attention throughout this 57-minutes live album from the 2015 Ljubljana Jazz Festival.

Wailing alto and churning drums open "Many People Were Scandalized—Some Still Are" (the expansive titles are another holdover from their previous disc). Rasmussen's habit of working out of iterated phrases, building her lines patiently and insistently, meshes well with Corsano's tapestry of recurring rhythmic cells. Illustrative of the listening in train, they regularly come together in responsive echoes, as when Rasmussen modulates her attack when Corsano drops the volume, or when the drummer briefly mirrors the accentuated stutter within the saxophonist's flow.

However they alternate the blistering interplay with the quest for novel textures; these often touch on drone sonorities, as on "You're Breaking Up, The House Is Going Through A Tunnel," where Rasmussen proposes muffled purring split tones into a silence gradually broken by Corsano's hushed whine. At times the saxophonist's preparations of her instrument conjure sounds which ape electronics, abetted by Corsano's slide clarinet, as with the juddering and hooting multiphonics of "A Detail."

The closing "Another Detail" serves as a summation as it moves from a conversation between a rattling percussive cavalcade and slurred questioning alto, to a pair of crescendos linked by a quiet drum throb. Such is the release when Rasmussen finally cuts loose with falsetto overblowing, that she continues even after Corsano's rolling thunder has ceased.

Many People Were Scandalized—Some Still Are; Folding In On Itself; Let's Have A Raincheck On The Franchise; Today's White Blood Cell; Well Now, There, There; You're Breaking Up, The House Is Going Through A Tunnel; A Detail; Another Detail.

Title: A View Of The Moon (From The Sun) | Year Released: 2019 | Record Label: Clean Feed Records