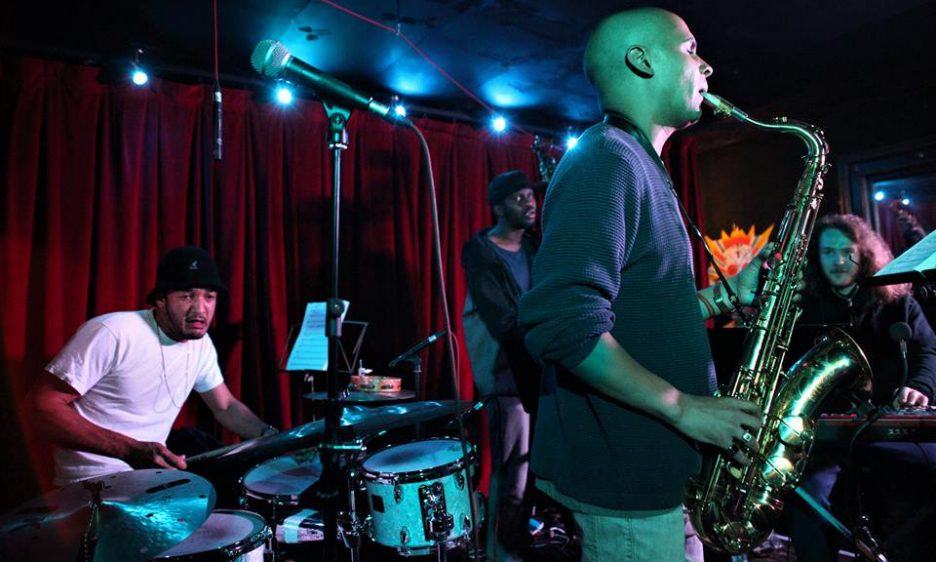 The launch event for the 2019 London Saxophone Festival, which runs until June 16, featured two of the most edge-of-your-seat, high impact, kick-out-the-jams tenor saxophone-led bands in the recorded history of British jazz. The senior leader was Denys Baptiste, the heir apparent was Binker Golding. It was an event which promised much and delivered it all.

Golding's band was on first. Golding is best known for his work with drummer Moses Boyd in the ferocious semi-free duo Binker and Moses, which has released three landmark albums on Gearbox. The label is a core platform for London's emergent woke-jazz scene, which is in part defined by its hybridisation of the African American jazz tradition with styles reflecting the Caribbean and African heritages of the majority of its vanguard players. Golding is one of the standard bearers of the new scene. Baptiste is one of the guys who prepared the ground for it. Golding's set was a sneak preview of his upcoming quartet album, Abstractions Of Reality Past And Incredible Feathers, scheduled for release on Gearbox later this year.

Before playing the first tune, Golding explained that, unlike the volcanic dissonances of Binker and Moses, Abstractions Of Reality Past And Incredible Feathers is strictly "sweet boy" music. The band—keyboardist Sarah Tandy on Nord Electro 4, who was depping for the album's Joe Armon-Jones, double bassist Daniel Casimir and drummer Sam Jones—then tore into a flaming hard-boppish up-tempo number fierce enough to rip your nose clean off your face. First Golding, then Tandy, played machine-gun solos with enough notes and more than enough speed to make bop auteurs Charlie Parker and Bud Powell sit up and take notice. Three more numbers of similar intensity followed, before the set concluded with something close to a ballad. Certainly, compared to Binker and Moses, the quartet's approach is more structured, but it is every bit as abandoned. If this is "sweet boy" music, the term is clearly a relative one so far as Golding is concerned. The set was a blinder. Bring on the album.

Now totally in his prime, Baptiste released his first album in 1999, sixteen years before Binker and Moses' debut. Tonight's performance was a welcome rewind of Baptiste's career-defining 2017 masterpiece, The Late Trane (Edition). As the title suggests, the album is drawn in the main on material from John Coltrane's post-classic-quartet period, with the addition of a couple of earlier pieces (notably including a ska-kissed "After The Rain") and a couple of Baptiste originals. The band was more or less the same as the one which made the album—electric keyboardist Nikki Yeoh, double bassist Larry Bartley, who was depping for the album's alternate bassists Gary Crosby and Neil Charles, and drummer Rod Youngs. Baptiste and Yeoh were the main soloists, repeatedly cranking things up to extraordinarily ecstatic levels. Youngs played like Elvin Jones at his most possessed. His contribution was beyond measure. The band played much the same set at London's Barbican in November 2017, in a tribute to John and Alice Coltrane headlined by Pharoah Sanders. That was an amazing performance. But tonight was even better because Baptiste, Yeoh and Youngs were wilder, truly Dionysian.

While you never can tell, nothing else, surely, in the 2019 London Saxophone Festival could come as close to heaven as this gig. It was perfection. Unforgettable.