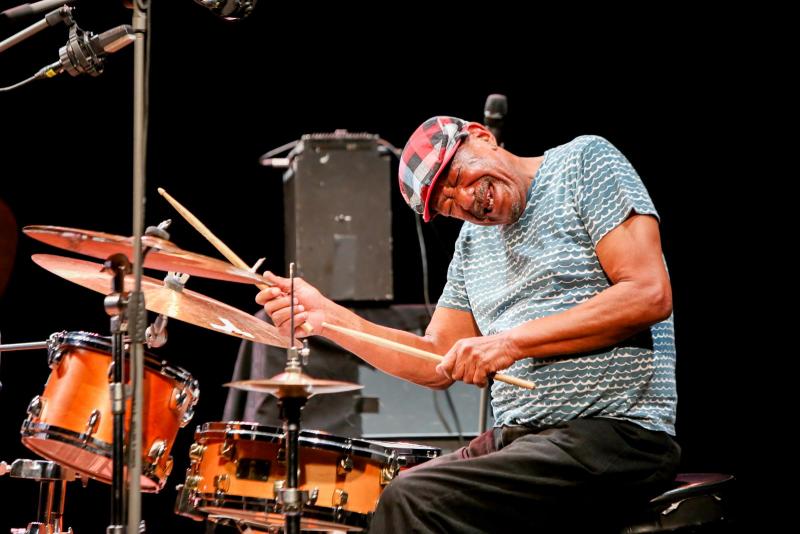 By Francesco Martinelli
April 18, 2016
Sign in to view read count

Jazz invaded Bergamo with a joyous celebration of the music’s diversity.

For the first time under the artistic direction of trumpeter Dave Douglas, the 38th edition of the Bergamo Jazz Festival—one of Europe's longest running jazz events—invaded the ancient and noble city in the North of Italy with a joyous celebration of the music's diversity.

The beautifully restored Teatro Sociale in the Città Alta—Bergamo's ancient city center is atop a steep hill—saw for the opening night the concert of pianist Franco DAndrea's Traditions Today band, with Daniele D'Agaro on clarinet and Mauro Ottolini on trombone, with special guest Han Bennink on snare drum and any other drummable surface. Fighting with the torrential Bennink is never easy, and D'Andrea's pianism is always reserved; he seemed not to be especially well served by the instrument or the PA, so he was often difficult to hear among the enthusiastic band. His reformulations of classic jazz tunes—D'Andrea began on soprano saxophone in Dixieland bands and played double bass for a living before returning to the piano—were always concise and enlightening, and Ottolini demonstrated his mastery of the mutes. The second half of the evening was dedicated to the young and brilliant trombonist Ryan Keberle's band, Catharsis, with singer Camila Meza and Mike Rodriguez on trumpet. Blending the voice with two brasses in a front line is not an easy task and I suspect that Camila had too much voice in her monitor, so sometimes the overall sound was not well balanced. The band at the beginning seemed eager to do too much, but slowly they settled and the concert steadily grew. A song in Spanish gave solidity and truth to the voice, and the wonderful encore—a destructured version of Ivan Lins' "Madalena"—was the climax of the concert. A young band full of talent and promise, and a repertoire that could benefit from a better balance between original material and classic songs worth rediscovering.

The two tenor saxophones of Tino Tracanna and Massimiliano Milesi, one a well-established figure on the Italian scene and the other a not yet very well-known musician with a definite personality of his own, share an interest for the sonic qualities of antique tenor saxophones, and performed acoustically in the setting of a modern art gallery, surrounded by inspired paintings and sculptures. The concert was yet another reminder that listening to unamplified instruments in congenial settings is such a crucial part of understanding what music is about. The subtle play of pitches, timbres, dynamics and harmonics, the two voices blending or separating in a program that included free improvisations as well as Monk and Bach, were fascinating. They both live in Bergamo where there's definitely no shortage of excellent reed players!

The evenings in the Teatro Donizetti—one of Italy's most beautiful opera halls—were opened by Geri Allen's piano solo dedicated to the soul music repertoire of Motown. The audience was mesmerized by Mrs. Allen's charisma and the beautiful sounds she elicited from the piano, but at times the material seemed too thin to support a continuous flow of ideas, so she seemed to evocate the spirits of Duke, Monk and Jobim to help the proceeding. A well-deserved ovation from the capacity audience saluted the performance. Joe Lovano followed with his "classic" quartet dedicated to the music he grew up with. The masterful saxophonist, whose band co-led with Scofield was extremely well received, played mostly original material but when artistic director Douglas joined in for a couple of tunes the atmosphere instantly reverted to the Soundprints sound, their joined dedication to Wayne Shorter. Lovano cares a lot for his Italian roots, and will return soon for a celebration in his family's hometown in Sicily. We had a sympatico conversation over breakfast and he told wonderful stories of learning by his father and musical family: his empathy with the audience was very strong.

Clarinetist Anat Cohen—introduced with some slight exaggeration as "one of the world's best clarinet players" led her Brazilian themed quartet in a repertory similar to her recent release Luminosa. I am not in love with her miking style, the pick-up mike in the clarinet ensures independence in movement and from variable quality of PA system but the instrument's color is flattened, impoverished. Cohen charmed the audience with a very pleasant set where however the sense of adventure and risk was almost absent. This did not matter a bit for the public, clamorously enthusiast for the band. The show business side of jazz at its best, if you want, with excellent rendition of classic Brazilian repertory: I especially appreciated the nod to Pixinguinha with "Um A Zero." Pianist Kenny Barron performed with his trio that included Kiyoshi Kitagawa on bass and Johnathan Blake on drums. Barron is a monumental presence in the history of the music, and his set had classic proportions, with some well-crafted solos by his accompanist. Inscribing the music by Monk and others into what could be called the World Heritage of music is more than justified, but in the process—probably inevitably—some of the sheer dangerous and subversive character of the music is lost, and this reviewer for one misses it.

The rather bleak and uncomfortable—but with excellent sightlines -Auditorium saw in the afternoons some of the best concerts of the festival. A rather younger audience welcomed Atomic, the celebration of "classic free jazz" -if this makes sense to you—led by Fredrik Ljungkvist on tenor and Magnus Broo on trumpet, with Håvard Wiik on piano and contributing maybe the strongest pieces in the repertoire, the very in demand Ingebrigt Håker Flaten on bass—now living in Texas—and Hans Hulbækmo seating on the hot drum seat left open by Paal Nilssen-Love. Echoes of Don Cherry and Ornette, of Haden and Shepp spiced a set of original compositions enlivened by endless energy and joyous interplay; less thundering and more reflexive compared to the edition with the previous drummer, but adventurous nonetheless. Flaten's final bass solo had the inevitability of the greatest improvisations: a successful set of a fascinating band.

The days' program were completed by late night concerts in a sort of pavillion just a few steps from the museum, and it is there that we dragged ourselves, a little wary after a full day of music, to hear Clock's Pointer Dance, a local band created within the activities of the Clusone festival (famous for its avant-garde bent and for the Clusone Trio that took name from this small city near Bergamo). Paolo Malacarne on trumpet, Andre Baronchelli on trombone, Andrea "Jimmy" Catagnoli on alto, Michele Bonifati on guitar and Filippo Sala on drums performed a fresh and energetic set of all original compositions, with intriguing wind arrangements and good interplay: the band already traveled internationally, and hopefully will carry on working together in order to gather more experiences.

The "Balkan Bop Trio" with Markelian Kapedani, piano, Yuri Goloubev, bass and Asaf Sirkis drums, offered to the festival by the local Jazz Club, was what its title promised. Again the sound was not too brilliant, with very loud drums, and the pyrotechnic piano solos grew stale after a while—maybe not the best choice for an 11 am Sunday morning concert.

The concert of the band led by drummer Mark Guiliana was predictably full of young people that wanted to see if some magic stardust remained on the drummer after his collaboration with Bowie. Jazz works its magic in strange ways though, and I am sure that the capacity audience was captivated by the complex, polyrhthmic music full of twists, turns and surprises created by the band (they however played a Bowie song as an encore at the end of the set as a tribute, and it was for me the weakest piece).

The final night opened with Wicked Knee, led by Billy Martin of Medeski Martin and Wood fame but a well-known scholar of rhythm and traditional percussion instruments, with Steven Bernstein on trumpets, Bryan Drye on trombone and Michel Godard on tuba and serpent. Again a bridge between classic and free jazz, eminently listenable and fun, but somehow not living up its possibilities: drumming was often quite basic, and the freely improvised passages did not seem to jell. Best moment was when Godard took out his serpent, a keyless bass brass from the 16th century shaped like a snake, and Martin shook his rattles, instantly transforming it into a rattlesnake. During Martin's set I found myself thinking that given the number of jazz avant-gardist playing classic jazz tunes that we are seeing maybe a novelty project would be to organize a festival where revivalists are invited to play "Ascension," "Ghosts," and the whole Free Jazz suite.

The absolute crown of the Festival was however its final set, the Five Blokes led by South African drummer Louis Moholo-Moholo with Jason Yarde and Shabaka Hutchings on saxophones—the latter leads the up-and-coming band Sons of Kemet, a great hit in Europe's clubs—Alexander Hawkins on piano and John Edwards on bass. Originally from Cape Town, Louis Moholo-Moholo left South African during apartheid together with The Blue Notes led by Chris McGregor, with Johnny Dyani, Mongezi Feza and Dudu Pukwana: Louis is today unfortunately the sole survivor. They formed the nucleus for the following big-band like aggregation, fusing South African jazz with free improvisation, the mighty Brotherhood of Breath. In a whirlwind of well known themes from the repertoire of the Blue Notes and of the Brotherhood like "B My Dear" and "You Ain't Gonna Know Me...," Moholo-Moholo evoked the spirits of the departed friends leading the band at maximum speed, showing amazing energy and asking the musicians to do the same in front of an ecstatic audience that asked for two encores. There was nothing post-modern, destructured, or too clever around the set: just burning free jazz of the highest order, and the most fitting conclusion for the festival. 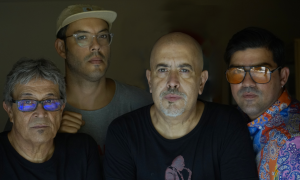 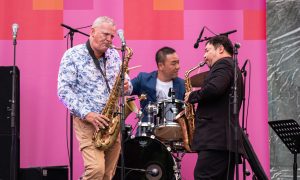 since the 70 committed to spread jazz culture in Italy