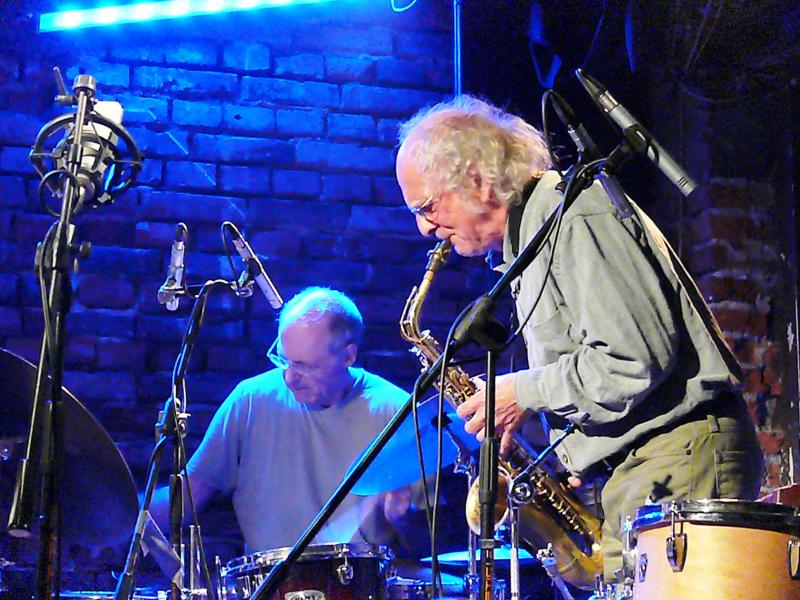 Now in its seventh year, the annual autumn jazz extravaganza—Krakowska Jesien Jazzowa, in the beautiful Polish city of Krakow—has gone from strength to strength. It's impossible to see all the acts on the bill without spending several months in residence as they come in blocks from early October through to the start of December. Famed in recent years for its vibrant jazz scene, the festival attracts top notch acts from America, and Chicago in particular. On the bill earlier in 2012 were reed titan Peter Brötzmann, in consort with multi-instrumentalist Joe McPhee, Scandinavian supergroup The Thing, the DKV Trio featuring saxophonist Ken Vandermark and drummer Hamid Drake, and drummer Tim Daisy, among a host of other European acts including a solo concert from one of Poland's premier improvisers Mikolaj Trzaska.

Most of the events take place in the famed Alchemia club, nestling in the Kazimierz Jewish quarter of the city. Known as the venue for the Vandermark 5's 12 CD box set of the same name (Not Two, 2005), Alchemia provides an intimate space with clear acoustics in the basement of the café, accommodating an audience of some 100 souls. Proprietor of Not Two records, Marek Winiarski, acts as artistic director for the festival and was on hand to introduce each evening.

While a momentous event, this wasn't the first time that bassist Barry Guy = 7303's New Orchestra had taken up residence in Krakow, as it appeared there previously in November, 2010. Reprising that occasion, the orchestra broke down into small group sessions for the first three nights at Alchemia, while rehearsing during the day for the grand finale, a concert by the BGNO in the well-appointed auditorium of the nearby Manggha Museum on the concluding Friday night.

Guy stands as a singular figure in modern music, personifying an unequalled meeting of the classical, contemporary, jazz and improv worlds. Renowned as a sensitive interpreter of baroque early music (the Englishman appears on over 150 recordings, and has performed with all the specialist early music ensembles), that strand of his oeuvre remains relatively separate, though renditions of the works of seventeenth century composer H.I.F. Biber regularly feature on his recordings with his partner, violinist Maya Homburger, such as the marvelous Tales Of Enchantment (Intakt, 2012), alongside his own compositions. But the two strands for which he is best known are the high voltage improv, showcased to stunning effect in a long standing trio of compatriots saxophonist Evan Parker and drummer Paul Lytton, and the large scale charts of the London Jazz Composers Orchestra, seen in its last incarnation on Harmos Live At Schaffhausen (Intakt, 2012). 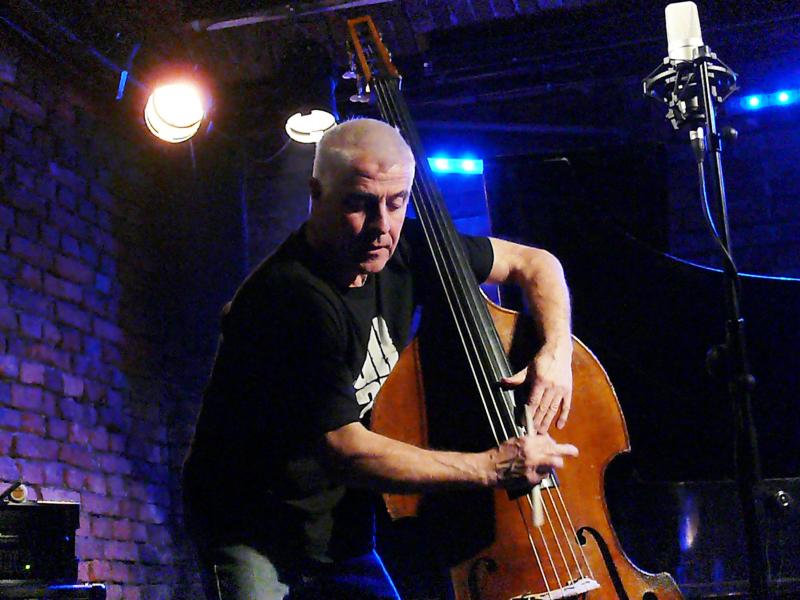 As one of the world's preeminent improvisers on bass, Guy was simply breathtaking to observe. His bursts of hyperactivity combined precise articulation, a plethora of extended approaches and seemingly inexhaustible stamina. While he might wield a mallet with one hand, to mine overtones from the strings both above and below the bridge, with the other he would simultaneously finger rapidly changing notes and chords. Any normal bassist would be content executing one or the other, rather than trying both.

As guitarist George Burt of the Glasgow Improvisers Orchestra comments, in the sleeve notes of its collaboration with the bassist on Schweben—Ay, but can ye? (Maya, 2012), there are several facets which combine to make Guy's orchestral work: the unity of the composed and improvised passages; the concern for the capabilities and strengths of individual players; and the way in which small groups are a part of the larger construct of his major pieces. All of those have been apparent through the development of first the LJCO and now the BGNO. While, at one level there, was a marked contrast between the spontaneous give-and-take of the first three nights and the whole ensemble pieces, at another it was simply a matter of the charts providing a framework within which the subsidiary groupings could intermingle. In Guy's words, the Alchemia sessions offered an opportunity to explore what a big band could be. And what a terrific range there was, veering from hushed exchanges of timbres via incendiary free jazz to out and out noise.

That first evening began with Spanish pianist Agusti Fernandez alone on the stage. For his opening gambit, he swiped at the strings, rasping across the wires, creating impossible glissandos and almost electronic slabs of sound. Over the four days, the Spaniard proved likely to spend as much time under the bonnet as on the keyboard—strumming, rubbing and tapping, but also incorporating his Cecil Taylor-inspired drive with muscular bustling lines, largely eschewing the brooding lyricism of say Aurora (Maya, 2008) and his recent El laberint de la memoria (Mbari, 2011). As he continued, he blended tremolos on the keys with abrasion on the strings for a percussive effect, until exploding solely along the keyboard, heavy on the bass in knotty kernels. 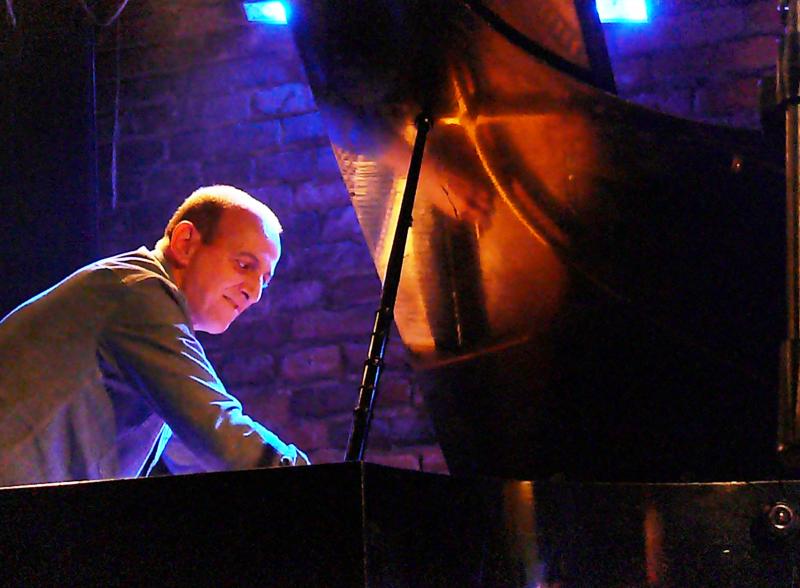 A high whine of indeterminate origin was revealed to emanate from the muted pocket trumpet of Herb Robertson, when he materialized from backstage. Fernandez fell silent leaving the trumpeter to squeeze out the merest of whinnies. His sudden clamorous blasts interrupted the busy litany squeals, slobbers, and blustering squall. As Robertson came to a conclusion, the sound of keypads popping presaged the appearance onstage of Parker. He launched thick intertwined tendrils of circular breathed exhortations on tenor saxophone, tonal fragments which consumed themselves in a tail-chasing round, as both the pianist and trumpeter sat quietly.

One of the distinctive features of the BGNO is that it has at its core a number of preexisting combos, such as the enduring Parker/Guy/Lytton outfit and the Tarfala Trio (Guy, with the Swedish duo of drummer Raymond Strid and saxophonist Mats Gustafsson). Unsurprisingly, these established formats carried the greatest weight, with all the orchestra's members skilled at group improvisation, able to conjure art from out of the ether, riposte with such rapidity that it would be impossible to script, and move in unison without anything other than aural clues towards mutually acceptable and fitting conclusions. What was more astounding was the profusion of expression from fun-loving to severe, broad brush to jostling detail, open lattice to sheer cascade. Quality was a given, but even so, some combinations stood out more than others.

One of those was the closing set of the first evening, effectively the Tarfala Trio augmented by trombonist Johannes Bauer and percussionist Lytton in a bravura exhibition. Practiced communication meant that all five always knew where to go, changing direction at the merest hint. Bauer interspersed his emphatic blowsy riffs with breathy squawks and vocal mutters. In this company, Guy avoided elaboration, at times concentrating on a determined high octane strum, as Gustafsson flared in berserk oratory amid Bauer's boozy smears.

Strid and Lytton engendered a feast for the eyes as well as ears with their lively antics, constantly in motion, co-opting and discarding noise-making implements. In the interludes between the impassioned rhetoric, rarely have two drummers made so little noise, as they concentrated on novel textures. In a moment of joyous perfection at the end of the set, Guy bowed low toward the bridge, blending his honeyed sound with the pure tone generated by Strid scraping a stick gently across his cymbal. 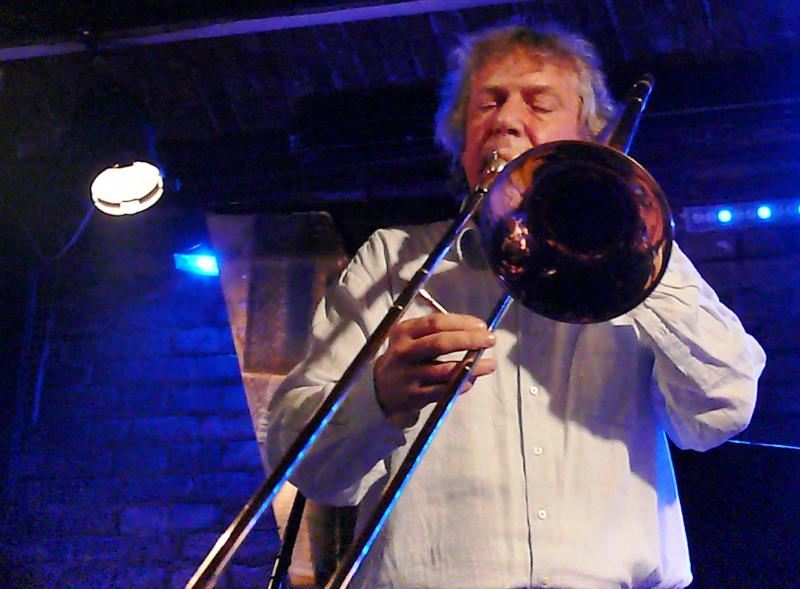 Bauer's unaccompanied set, at the start of the second, evening encapsulated much of what makes him so special. He announced himself with reiterated fanfares, angled from the walls and ceiling and resonating around the room, then constructed his set from these persistent motifs. After the clarion wails he moved onto exhalations, whooshy trills, growls, and chunters, with the trombone only intermittently at his lips. He was even able to incorporate having a sip of red wine into his playful discourse, finishing after further brassy gales by saying "and so on..." with a big smile.

Also of note was Bauer's triumvirate, accompanied by the seasoned Guy/Lytton pairing. Bauer's broad impasto strokes made for a pleasing opposition to the detailed miniatures essayed by bass and drums, both teeming with invention and manic hyperactivity. Guy exhibited an astonishing range. caressing the strings as his fingers slid up and down the neck to finesse the modulated notes—even taking a paintbrush to the strings and body of his bass, exploiting more techniques in five minutes than a lesser player might deploy over a complete evening. Similarities with Lytton were obvious as he cycled through abrasions, scrubs, and clatter—including, in fact, everything including the kitchen sink.

Another threesome, found Parker and Trevor Watts's tenor and alto saxophones respectively merging into a single multi-voiced instrument, while Fernandez stabbed arpeggios, all phrasing in sync. Watts' rich-toned alto resembled a tenor in the depth of his howls, which he effectively contrasted with soaring swoops and choked cries, in one exemplary section. Fernandez provided the substructure, slamming the keys as the horns reached a peak of intertwining combustion. At one point, both Parker and Watts stood side-by-side, circular breathing varying drones embellished with grace notes and phantom voices as the Spaniard sat watching. He then took up a wooden block to rub inside the piano, creating a deep ghostly rumble, which morphed into a haunted harpsichord backdrop. In a densely busy soundscape, both saxophones sparred, cajoled, shadowed and stalked, then negotiated a gentle finish to another excellent set. Even Guy commented on the "lovely ending," in his introduction to the next set. 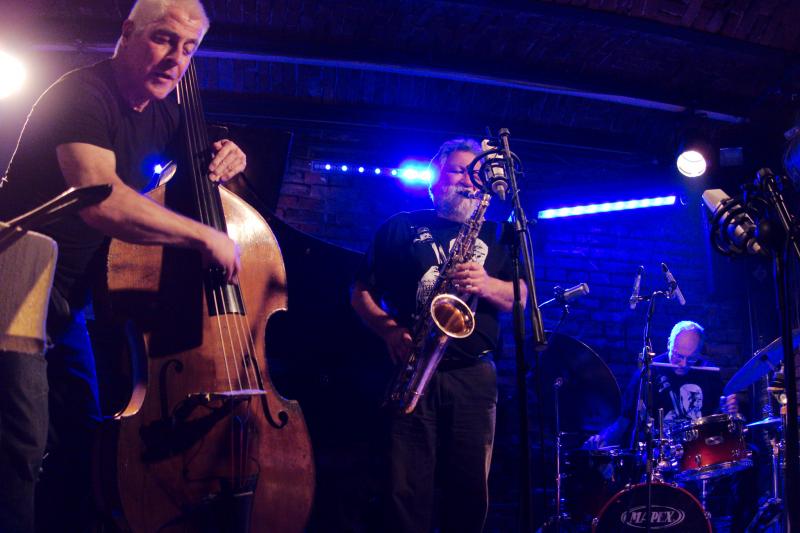 As a complete antithesis, the following trio broadcast only the quietest of pops amid the silence. Ironic as the bottom-heavy firepower assembled onstage comprised Gustafsson's baritone, Per Ake Holmlander's tuba and Hans Koch's bass clarinet. Sporadic proclamations from the two reeds were forged into a coherent narrative, replete with space, and the stop-start momentum. Chortled snuffles suddenly exploded in stentorian bellows. More inspired interplay ensued between Holmlander's snorts, Gustaffson's volcanic outbursts and Koch's heavily vocalized wheezes and chuckles, fashioning a splendid set born of intense concentration.

The concluding grouping of the second evening was the one that everyone had been waiting for—the 32 year-old Parker/Guy /Lytton unit—and they didn't disappoint. To honor the occasion, both Parker and Lytton modeled t-shirts adorned with Guy's image, (the same one visible on the posters advertising the festival emblazoned throughout the city), much to the bassist's horror and the crowd's hilarity.