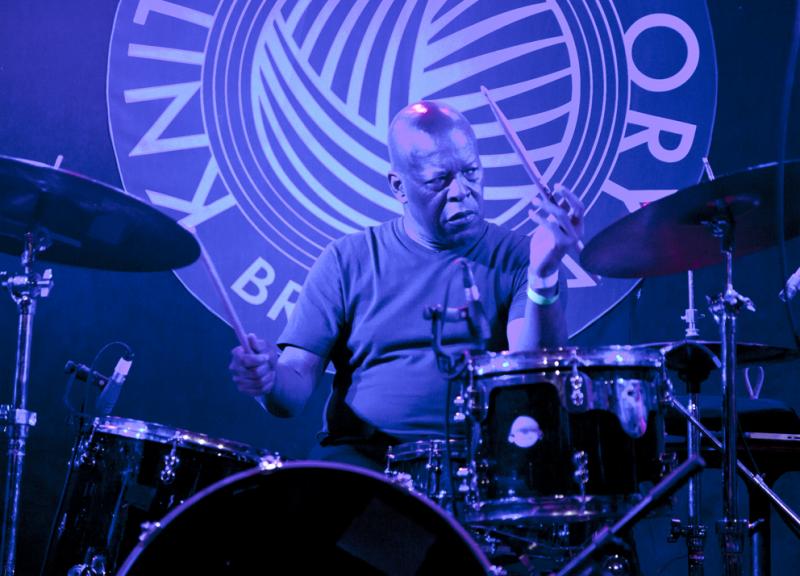 Another 70th birthday to celebrate, another musician who commands the appearance and vitality of a much younger player. New York drummer Barry Altschul actually hit 70 two days before this celebratory gig at Roulette. The long-established experimental music venue is now settling in at its newer Brooklyn space very well. There's a sense that the joint has stabilized and refined itself as a performing space, in terms of its sound, light and acoustic qualities.

Altschul elected to combine his birthday party with an album release party, although the actual atmosphere was more concert hall than jumping joint in nature. This didn't prevent the players from spreading a robust sense of humor throughout the proceedings, something that doesn't happen too frequently within the sanctum of hardcore free improvisation. Altschul also decided to reform a band that hadn't played together for 30 years. He was joined by trombonist Ray Anderson and bassist Mark Helias to revive BRAHMA, a name which is concocted by employing their initials. The other trio on this double bill was The 3dom Factor, a much newer joining of Altschul with tenor man Jon Irabagon and bassist Joe Fonda. Its eponymously titled 2012 Tum recording provided the evening's release party part.

The 3dom Factor played first, concentrating on material from the album, composed but frequently having the feel of controlled improvising. This is a trio that's already honed a deep rapport, maintaining constant interest via a consistent interchange of dominant roles. There were frequent solos, many of them being literally solo interludes, with the remaining pair of players observing silence. At other times, perhaps just one member would play the accompanist part, often reining the sound down to a restrained field of introversion. When the entire trio was in full flow, the opposite extreme rose to dominance, each of them negotiating themes that were riding closely in rapid-repeat tandem. Altschul used cowbells, wood (or plastic) blocks and whistles or siren horns, establishing the vibration of an itinerant street musician. Carnival in a free-form state. Perhaps these special effects were a touch overused, but there was still ample demonstration of Altschul's polyrhythmic skills on the more mainstream parts of his kit. Irabagon was always studiedly in control, but he has a way of investing cerebrally organized, fleet-fingered progressions with a soaring passion. He spurts out an unbroken flow of exploratory phrases, winding along an unpredictable path.

When BRAHMA took to the stage following an intermission, even their brief sound check was a work of art. When Anderson plays in New York City, it's usually at either the Jazz Standard or The Cornelia Street Café, both of which have small stages. Here at Roulette, there was an opportunity to see him rambling along the ample boards, unleashing the New Orleans physicality of his 'bone rasping. The joyfulness of this threesome was contagious. The opening statement of intent was that this set was going to be completely improvised. So it was, but that didn't prevent the trio from throwing in a sudden reading of "Cheek To Cheek," penned by Irving Berlin and most closely identified with singer/dancer/film actor Fred Astaire. Anderson really was in a Crescent City frame of mind, repeatedly returning to blasting raspberry riffs, in-between the sparsely enunciated high-note acrobatics.

To make this gig even more special, the second set concluded with Irabagon and Fonda returning to the stage, forming an extended unit. Now it was thrilling to observe the bonding of Anderson and Irabagon, as well as Helias and Fonda, although it wasn't as simple as that, there being lightning flashes of intuition between all five players. These are some of the few artists who could successfully weigh in with a "Happy Birthday" that simultaneously conjured New Orleans partying and ascendant freedom-blowing, turning the tune into an extended encore. This was a musically challenging evening, inflamed by a strong sense of playfulness.

Drummer William Hooker booked his own gig at The Knitting Factory, marking a somewhat rare return for jazz at a venue that once held the music close to its pulsating core. He also elected to conjure up a sequence of playing situations, creating a set of lineups that'd mostly never played with each other before. He doubtless had a gut feeling that these artists would cohere instantly, and he was indeed correct in his predictions. The essence of this evening was the dominance of the spontaneous, improvised thrust, but a wayward element was born due to the key makeup of each band's sonic assault. A jazz vocabulary was certainly present, mostly with the horn players, but other forceful powers arrived via the language of rock, rap, ethnic folk and modern composed music. Here was an assemblage of players and combinations that are less frequently sighted. The whole night resonated with an impromptu energy that mostly brutalized, but also held stretches of layered contemplation.

Rapper Akustyx and clarinetist Matt Lavelle opened the proceedings with a short mood-establishing set, Lavelle sketching and stretching around Akustyx's rhymes. Next up, there was a multi-generational quartet featuring Tom Hamilton (electronics), Gary Heidt (guitar), Larry Roland (bass) and Ravish Momin (drums). Their confrontational stance cast a glance back at the heyday of No Wave, mixing a classic serrated Downtown funk-rock with Hamilton's electronic interference tactics. His distressing emissions were reminiscent of Allen Ravenstine's work with Pere Ubu, and contrasted well with Heidt's sporadic deadpan vocal interjections. Hooker then guested (or was he a full member?) with David Watson (bagpipes), Matt Lavelle (clarinet), David First (guitar), Mark Smith (bass) and a mystery djembe player. Watson put the drone determinedly in drone-rock, providing a rare chance to hear the pipes in a radically alternative setting.

Not surprisingly, many prime connections were made during Hooker's own set, when he was joined by Zach Layton (guitar), Michael Attias (saxophone) and Tom Zlabinger (bass). It was startling to hear Attias in a much more violent setting than is usually the case when he's leading his own bands. This exposed another side to his soloing, as he soared over Layton's jagged, asymmetrical riffs. Hooker was a cyclonic force at the back, rising into the centre, setting up thundering swells of jazz freedom in a rocking context. The evening's final set was notable for the dominant presence of violinist David Soldier, leader of the The Soldier String Quartet, with Lavelle and Akustyx returning alongside bassist Mike Noordzy. All of the band combinations managed to sustain an intensified manifestation of free jazz, free rock, or whichever style happened to be having its wings unclipped at any given stage of the proceedings. Hooker should do this again.


Drummer Bobby Previte opened up the 2013 Winter Jazzfest, delivering one of the three triumphant sets of the night right at the beginning of the proceedings. The other winning sets were to come courtesy of The Fringe and Jacob Garchik's Atheist Gospel Trombone Choir. Previte's Baritone Trio also included guitarist Mike Gamble and baritone saxophonist Fabian Rucker, an unfamiliar player from Vienna. Gamble perched on a stool, investigating with a splashing, reverberant, effects-ringing, deliberate-hum backdrop. He was halfway between dappled noodler and angular serrater. Previte is an extremely tuned and tuned-in stick man. There were parts of the set where he was deftly clacking on his hi-hat, cymbals, and their stands, hitting chiming note repeats, turning that figure into an integral part of the piece, then slashing softly across his gleaming metal array. He was mechanical in his rotations around the skins, but also roughly attuned to their organic qualities. Rucker was a revelation, glorying in the Bowery Electric's punchy sound system as he rattled out deeply guttural riffs and soloing bellows. Despite the above-described abstractions, Previte's compositions were always indebted to the groove, barreling out of a 1960s soul jazz tradition, upended into some freshly brawling experimentation result.

Nearly every Thursday night, the David Rubenstein Atrium at Lincoln Center offers free admittance performances featuring a wide range of musical styles. On this particular occasion, the queue stretched right around the corner, and the space swiftly reached its audience capacity. This was an understandably popular show, as it marked the first time that drummer Andrew Cyrille had presented his new big band project. The lineup also featured a small contingent of Los Angeles members rarely seen in New York.

This expansion seems like a natural progression for a player who's already worked in every conceivable smaller-combo permutation. Even though Cyrille was often at the centre of his own sound, this was a vehicle for his compositional skills. There had been a significant collaboration with conductor and arranger Mark Masters, who hinted at a strong influence in the final inked realization of each piece, an editor as well as a sonic servant. This was a core big band, with most of the players sitting in the horn ranks, only Cyrille and bassist Putter Smith set outside these rows.

Cyrille has an album lying in wait, and is now seeking a suitable record company to release the results. Most of the works are lined up to appear on this projected disc, the set opening with a pair of representative pieces, "The Navigator" and "High Priest." This last tune was dedicated to the memory of the departed reed man David S. Ware, and featured a rap intro by Cyrille. This was partly rap in its original beatnik sense, and partly influenced by the rap of today.

The compositions weren't as extreme or as abstracted as might be expected from Cyrille, virtually inhabiting a mainline big band terrain. Despite Masters talking about these tunes' extremes, ranging from tight arrangements to free form expression, the improvisations always seemed very rooted in the establishing themes. This was no negative state, as much of the night's flighty spirit emanated from the often inspired solos by reed multi-instrumentalists Billy Harper, Marty Ehrlich and West Coaster Gary Foster, sonic painter Craig Harris, mute-burbling trombonist Art Baron and trumpeter Cecil Bridgewater. The leader also delivered a completely solo percussion piece, emphasizing tuned skins and deftly repeated patterns.