By IAN PATTERSON
November 11, 2013
Sign in to view read count
The fusion in jazz-fusion or Indo-Jazz fusion—terms that are sometimes used to describe Ghosh's own music—doesn't sit too comfortably with Ghosh: "I see fusion as taking two or more styles and sticking them together and what I do isn't about that. What I'm about is jazz," he affirms. "It's just that I'm using another language to the blues, or show tunes or indeed avant-garde experimental music. But the culture that I'm coming from, in terms of how the music is structured, who plays it and where we play it, and in some ways who it's for—but not necessarily—is jazz.

Over the past half dozen years Ghosh has tended to work with a core group of musicians but he is clearly open to new collaborations as his involvement with the Arkestra Makara demonstrated. The Arkestra Makara was a pan-Asian ensemble that Ghosh and Chrys Chijiutomi were asked to put together for the Asian Music Stage as part of the 2012 London Cultural Olympiada, and part of a wider festival called the BT River of Music.

The musicians eventually brought together hailed from Sri Lanka, India, China, Nepal, Bhutan, Burma, the Philippines, Singapore, Japan, the Maldives and South Korea. In addition, Ghosh recruited free-spirited percussionist Susie Ibrarra from the United States: "That was an amazing experience," enthuses Ghosh of the one-off concert. "Our ethos was that percussion and strings were very important; the combination of harps and lutes that you've got across South East Asia and the range of percussion instruments are extremely inspiring to work with."

Ghosh was musical director of the Arkestra Makara and enjoyed the luxury of several days' rehearsal before the show: "Each of the musicians brought a piece of music of their own or of their folk style and the rest of the ensemble learnt it. We had my house band and my crew—bass, drums, vibraphone and percussion. We also worked with some young musicians from Morpeth School Music Department in East London, which was a great element.

"The colors that we were able to achieve texturally were absolutely brilliant," says Ghosh. "The combination of tuned percussion, gongs, strings plucked and bowed, with vibraphone, bass, drums and horns produced a really fine, amazing sound. That's why we called it Arkestra, because it really tapped into everything you hear in [pianist/bandleader] Sun Ra—or the things that you don't necessarily hear but that are almost implied."

Ghosh speaks with notable enthusiasm about the Arkestra Makara and the exotic array of instruments, some of which, he admits, he had never heard of before. "We really did something special," says Ghosh. "The Arkestra Makara is really kind of special. You can hear pan-African or pan-European ensembles but pan-Asian seems to be less common and I'd love to be able to do that more often. One day I'd really like to record it, but it's got to be all those elements, all those people. Collaboration is a great thing. It's very inspiring." 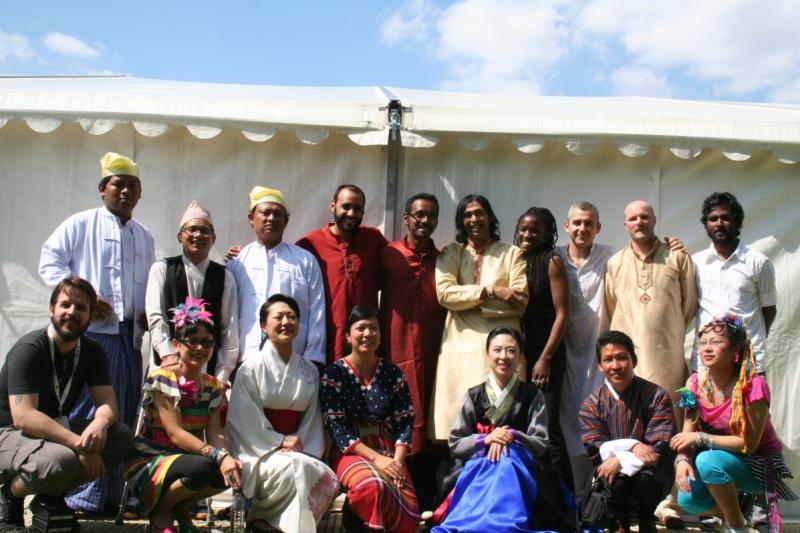 Another collaboration that threw Ghosh into new territory was the score he wrote in March 2010 for Lette Reiniger's 1926 feature-length animation "The Adventures of Prince Achmed." This bringing together of live performance and cinema premiered at the Albany, London and has since been performed in Manchester and in 2012 in Casablanca, Morocco with Berber, jazz and classical musicians.

In many ways, Ghosh's early professional grounding in the theatre served him well for this project, but likewise insists Ghosh, the experience of composing for theatrical/cinematic events such as "The Adventures of Prince Ahmed" has had an important effect on his method of composing for and performing with his touring group.

"The compositions I do for theatre, the musicians that I find myself working with and the musical ideas I have to express, all those things find their way into the songs that I'm writing, the instrumentation and my performance style. They inform each other," Ghosh explains.

"My improvisation has started to inform how I'm composing in the theatre. More often than not now I'm composing at the piano. I watch what's going on, the movements and the lighting, and I listen to the text and I improvise to it. At some point I'll record it with different instruments and that's started to influence how we're playing live. Anything which can take you beyond the notes, for me at least," says Ghosh "is to be welcomed."

Ghosh was appointed Associate Artist at the Albany Theatre in 2010 and a year later was made Artist-In-Residence for the Southbank's Alchemy Festival. He's composed music for over half a dozen theatre projects as well as composing scores for radio, film and television. With appearances at the London Jazz Festival and the aforementioned special commission for the London Cultural Olympiada with Arkestra Makara, Ghosh has clearly achieved a tremendous amount in a short time. This British Asian jazz clarinetist, who channels rock, punk and dance music as much as South Asian influences into his music, seems to be an important figure of the jazz mainstream in the UK.

Ghosh, however, is not entirely sure: "I'm getting some mainstream attention, in terms of who's interested in programming us, writing about us or playing us on the radio. I can't say I'm not mainstream in that sense. I'm glad about that I have to admit. I do feel that there's another side that keeps us away from the mainstream. My rock 'n' roll and pop background separates me from a more traditional jazz-orientated head space. I'm naturally going to be part of an alternative scene, one that's more aligned to the punkier, rockier side of jazz."

In a sense, Ghosh's music falls between two stools and it's not something that has escaped his notice: "The music I make with the South Asian sound also separates me from the main stream to a certain extent. There are places I haven't been programmed at and wouldn't be programmed at because I'm not necessarily thought of as a jazz artist but as a World Music artist. On the flip side there are World Music and South Asian music scenes that I'm also not necessarily part of because I'm thought of as a jazz act. I've made my own bed and I'm lying in it."

In the main, Ghosh remains upbeat about his music's ability to appeal to a broad demographic, regardless of the labels that people wish to stick on it: "I think there are a lot of people at jazz festivals who have grown up listening to Jimi Hendrix, The Beatles, Marvin Gaye, The Rolling Stone etc. as well as jazz music. I think we've got a sound that appeals to those people who appreciate different genres and that's because that's what I'm trying to express," says Ghosh. 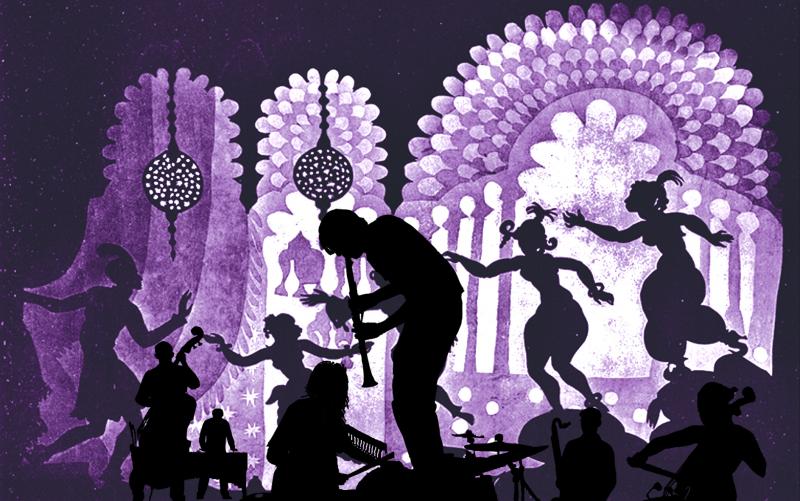 These days Ghosh is busier than ever, and seemingly casting his creative net wider still. There's a new piece called "A Handful of Dust—a multi-media reimaging of T.S Elliott's "The Wasteland" featuring the bowed Indian instrument sarangi, an electronic artist, a contemporary dancer and a poet: "It taps a little into my theatre side," explains Ghosh, "but I want it to be stark and brutal sounding in keeping with my impressions of what that poem is about. I don't want it be in any way, shape or form elitist. I want it to appeal to 13-year olds and 83 year-olds. It'll be a real piece of performance art."

As Associate Artist of the Spitalfields Music for the 2013/14 season, Ghosh has a couple more irons in the fire. There's a new commission for a large ensemble suite in 2014 that celebrates immigration over the centuries into the Spitafields area of East London, from the Huguenots and the Jewish to the Irish, South Asians, Eastern European and beyond.

Then there's the Winter Rasa, a work that will explore the pagan and folk origins of music from Eastern Europe, Andalucía Jerusalem and North African. The music is for choir, vocalist and six-piece band and will be premiered in Shoreditch Church in the second week of December. These two projects are ambitious in scope but Ghosh is undaunted by the task ahead: "The South Asian head space helps," declares Ghosh, "because I'm used to bringing together different styles and trying to make them work.

"It's busy," Ghosh admits, "but there are different things keeping me challenged and pushing me to write new stuff. It's a time when new ideas are coming. Hopefully some of the things that develop will find their way onto future albums. That's what has happened so far."

Despite the commissions and the multi-media projects, Ghosh hasn't lost sight of his musical roots: "Ultimately, I'm still a punk and a raver," says Ghosh, "so whatever ensemble I lead, whether it's a group of young people who have never played instruments before or the Beating Wing Orchestra, which is an orchestra I direct of refugees or people who've got asylum from all over the world based in Manchester, there's an ethos that we're not going to make pretty music necessarily. We're going to be passionate in terms of how we play. Even if it is gentle and pretty I want there to be intensity.

Passion and intensity are two words that pretty much sum up Ghosh's approach to music, whatever he's involved in. Whether playing for animated film or Indian dancers or whether playing with his jazz ensemble, a pan-Asian orchestra or refugee musicians, Ghosh's passion and intensity are the common denominators. There's also a tremendous openness in Ghosh towards other musicians, regardless of their origin: "There are brilliant musicians from all walks of life and all places," recognizes Ghosh, "and to have the opportunity to work with them wherever possible is great. It's truly inspiring."