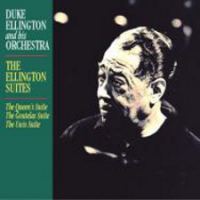 It should not be so hard to identify the most important jazz musician in the history of the genre. It is one of five artists: Louis Armstrong, Duke Ellington, Charlie Parker, John Coltrane, and Miles Davis. Much can be made for Ellington being the logical choice. Edward Kennedy Ellington (1899-1974) lived the entire history of jazz. He led arguably the most important big band of the swing era while also recording widely in smaller formats. But Ellington considered his music well beyond the definition of jazz. The extended compositions championed by Wynton Marsalis in the 1980s and '90s, germinated in the band book of Ellington.

The three suites included here were recorded between 1959 and 1972. "The Queen's Suite" was composed shortly after the coronation of Great Britain's Elizabeth II in 1955 and contains a solo piano (supported by string bass) composition, "Single Petal of a Rose." The Goutelas and Uwis Suites are 1970s products. The latter is supplemented with "The Kiss" recorded at the same time as the suite. Ellington still featured Paul Gonsalves and Johnny Hodges, whose voices loom large on this recording.

Ellington's suites may have suffered from under exposure for their forward thinking approach of melding jazz and classical forms. But listening to these pieces, the thread of Ellington, that creative remnant that matured in the late 1920s is in fully flowered evidence on these relatively late career recordings. These pieces make it hard to dispute Ellington's supremacy in American jazz.