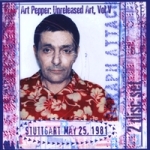 Since 2006, alto saxophonist Art Pepper's discography has grown by a CD of previously unreleased or limited released performances per year. This bounty is due to the diligence of Pepper's widow, Laurie, who has been accumulating material from her own and other private collections and releasing them on her Widow's Taste label. This has proven fortunate for Pepper-ophiles and students of post-bebop and hard bop alto. The four releases prior to Unreleased Art, Vol V: Stuttgart May 25, 1981 are comprised of three unreleased concerts and a three- disc retrospective of Pepper's career from his time with the Stan Kenton orchestra through these Vol V sides recorded a year before the saxophonist's death in June 1982.

Pepper's performance in Stuttgart on May 25, 1981 was part of the European tour that resulted in the The Croydon Concert, which took place the previous week. The Croydon Concert was a superb performance splendidly captured from the soundboard. It occurred in the early part of the tour. The band sounded sharp and rested. Break ahead after two weeks of near-one night stands and Pepper and the band have developed an edge of fatigue that cuts jaggedly through these performances. The band and performances are looser, exhaling after a sprint. The Stuttgart concert was derived from three different sources captured or collected by the same individual who provided The Croydon Concert tapes.

Laurie Pepper admits in the liner notes that this portion of the tour was a lost blur. The pieces are assembled in an approximation of how the show may have gone. At any rate, she suspects that she got the front and back ends right. Pepper typically kicked things off with an up-tempo blues, in this case his angular and thoroughly modern sounding "True Blues," and closed proceedings with a scorched-earth vehicle, this album's "Cherokee" being exactly that. The set overlaps The Croydon Concert only with the selections "Yours Is My Heart Alone," "Patricia," "Make A List (Make A Wish)" and "Cherokee," making the Stuttgart concert an informative, contrasting companion to the earlier recording. Fatigue did not so much make the Stuttgart performances more ragged, for it loosened the band's inhibitions, allowing for great flights of improvisation and, for Pepper, emotional expression.

The Stuttgart concert featured two of Pepper's most sublime ballads, his original "Patricia," written for his daughter, and "Over The Rainbow" from The Wizard of Oz. The second ballad is one of those untouchable songs that nature reserves for only the most emotive players. Pepper performed it throughout his post-1970 life, always with acute release. This band is sharpened by the troubled relationship between Pepper and pianist Milcho Leviev. While the pianist George Cables had a special relationship with Pepper (who called him "Mr. Beautiful"), Leviev, who did not take Pepper as seriously, sparred with the leader in such a way that a tension existed that honed these performances.

While Pepper and Leviev divide the lengthy "Make A List (Make A Wish)" between them, the song really belongs to bassist Bob Magnusson and drummer Carl Burnette. Magnusson mixes up the simple harmonic part, never allowing the three-note motif to spoil. Leviev, Magnusson and Burnett turn the piece into a rock masterpiece in the same way pianist Gene Harris did with "Summertime" on bassist Ray Brown's Bam Bam Bam (Concord, 1988). When Pepper enters for his solo turn, he summons a bit of the John Coltrane that possessed him in the early 1970s. Working his way out of that, Pepper proves what a great R&B saxophonist he is, funky and rich, full of that greasy good charm that causes feet to stomp and parishioners to cry, "Amen."

A master of musical drama, Pepper slowly raises the gas on "Make A List (Make A Wish)" from a working simmer to a full boil, squealing and honking his way down the bar. Eddie Harris could only have hoped to be so funky and vital. Pepper's playing is a tidal wave from a detonated atom bomb, relentless in climax. This original was a great vehicle for the saxophonist, perhaps not as technically demanding as "Cherokee," but very entertaining. Extended readings of "Over The Rainbow" and "Cherokee" close the set illustrating Pepper's supreme command of the ballad and up- tempo bop. This is the Gotterdammerung of the jazz life.