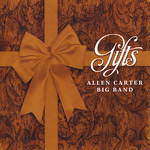 If there were any integrity or enlightenment in the music business as we know it in 2010—not to mention among listeners—drummer Allen Carter's debut big-band album, Gifts, would surely go platinum or at least earn a well-deserved Grammy Award. As not much of either trait is evident on today's scene, neither of those outcomes is in any way probable. As consolation, Carter has the pleasure of hearing his splendid compositions and arrangements performed and recorded by an ensemble comprised of a number of the finest musicians the Southern California area has to offer, thanks to his friend, trumpeter Wayne Bergeron, who not only offered to assemble the band on Carter's behalf but also to play exemplary lead trumpet in the image of his role model, the late Maynard Ferguson.

Carter wrote seven of the album's eleven numbers and arranged everything. Included are admirable readings of Jerome Kern's "Yesterdays" (tasteful tenor solo courtesy of Brian Scanlon), Toots Thielemans' "Bluesette" and a brace of unlikely big-band candidates, W.C. Handy's "St. Louis Blues" and the trad jazz evergreen, "When the Saints Go Marching In." The band, as one would surmise, plays Carter's charts impeccably, and there are impressive solos along the way by Carter, Scanlon (also featured on Carter's "The Gift"), fellow tenor Rusty Higgins (out front by himself on "Hey, That's No Lady!"), alto / soprano Dan Higgins, baritone Tom Peterson, trumpeters Bob Summers and Warren Luening, trombonists Andy Martin and Alex Iles, pianist Christian Jacob and guitarist Gary Solt. The rhythm section (Jacob, Solt, Carter, bassist Ken Wild) is remarkably snug and assured, especially when one considers that Carter's drums were recorded in Moorhead, MN, the ensemble in North Hollywood, CA. Ah, the wonders of modern electronics.

Perhaps the best word with which to describe Carter's musical temperament is "happy." Every number is imbued with a natural buoyancy and warmth that makes it a pleasure to hear and appreciate. Of course, it doesn't hurt to have some of the most accomplished sidemen one could hope to muster reading the charts, which are invariably engaging, as is the entire album. Carter writes that recording his music with this band was a gift to him; the end result, however, is beyond any doubt a gift to us. 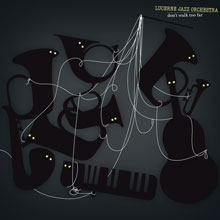 The booklet accompanying this debut recording by the Lucerne Jazz Orchestra contains group and individual photos of the members of the ensemble, none of whom looks to be as old as thirty-something (and some not even close). This is in itself remarkable, even more so when one considers the high level of musicianship and maturity shown throughout the well-designed, albeit too often ornate and strident, medley of half a dozen forward-leaning original compositions and one standard.

All of the new themes were written by members of the orchestra including a pair ("Mellow Drama," "Default Value") by music director David Grottschreiber (whose photo shows a smiling young man who could plausibly be in high school) and the album's lone vocal, "Don't Walk Too Far," composed and sung by Karin Meier and arranged by Grottschreiber. Alas, as is true of too many "contemporary" songs, the lyrics are esoteric and indecipherable. But Meier's voice isn't bad, and baritone Matthias Tschopp does his best (with mixed results) to rise above the song's more dissonant passages. Rounding out the program are trumpeter Aurel Nowak's "Janoschs Welt," trombonist Silvio Cadotsch's "Lea Lucia," trumpeter Matthias Spillman's "Simpler Is Better" and the Jay Livingston / Ray Evans standard, "Never Let Me Go," a lustrous showcase for alto saxophonist Florian Egli. Even though Bob Brookmeyer isn't involved, much of the music seems to exemplify his latter-day point of view, and trombonist Edward Partyka's warm endorsement serves to underscore that appraisal.

Meier returns with some "vocalese" on "Default Value," which, like most of the other songs, opens peacefully enough before lapsing into a more strident vein in which the soloists labor to be heard above the din. Having said that, it should be noted that everything is well-written, even when overblown, and, pleasing or not, this seems to be the direction in which big-band jazz is moving. Those who appreciate music with an earnest contemporary mind-set should welcome these new kids on the block, the Lucerne Jazz Orchestra, with open arms and ears.

Bassist Joris Teepe is from The Netherlands, the Joris Teepe Big Band from New York City, where Teepe has lived and worked since 1992. The booklet accompanying We Take No Prisoners includes a brief endorsement from Maria Schneider, which provides an explicit clue as to where the ensemble is positioned on the big-band landscape. This is earnest contemporary jazz in the Schneider / Gil Evans / Carla Bley / George Gruntz image, but it can and does swing, as witness the fast-moving title selection, the oddly titled flag-waver "Peace on Earth" and the carefree "It Is Peculiar" (Teepe composed and arranged every number).

Elsewhere, the music is more cerebral but no less diverting in its own way, as Teepe tries his hand at ascending and abating dynamics ("Flight 643"), new-age balladry ("Almost Lucky") and extended tone poetry ("The Princess and the Monster"). To carry out his purpose, he has at hand some of the New York area's most accomplished musicians including such well-respected sidemen as trumpeters Michael Philip Mossman and John Eckert, trombonists Noah Bless and Earl McIntyre, pianist Jon Davis, guitarist Bruce Arnold and saxophonists Mark Gross, Craig Bailey and Don Braden (tracks 5 and 6 only). Drummer Rashied Ali sits in for Gene Jackson on "Almost Lucky."

Braden solos effectively with Eckert and Teepe on "Peculiar" and with Teepe, Jackson and Davis on "Princess." Gross, Davis, Jackson and trumpeter Josh Evans are front and center on "Flight 643," Davis, McIntyre, baritone Jason W. Marshall, tenor Adam Kolker and trumpeter Vitaly Golovnev on "Prisoners," Mossman, Arnold and tenor Peter Brainin on "Peace," Arnold and Teepe on "Lucky." Everyone has ample room to stretch, and no one is less than presentable, even though there are times when some (no names invoked) step perilously close to the edge of tedium.

This is for the most part an agreeable debut for Teepe and his ensemble. Although the leader clearly leans toward the more progressive elements of big-band jazz, he hasn't turned his back on its time-honored framework, which makes his writing not only accessible but engaging. As for the band, it is first-class in every respect. 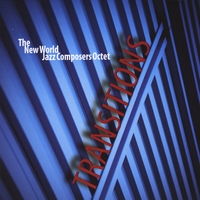 As its name professes, the Boston-area based New World Jazz Composers Octet is not, strictly speaking, a big band. On the other hand, it has a big sound, thanks in part to well-shaped charts, and is admirable enough in other respects to warrant an appraisal even in a narrative that is devoted for the most part to larger ensembles. Transitions, which is presumably the group's first album, consists of nine original compositions by five writers (three numbers each by Matthew Nicholl and co-producer Ted Pease, the others by Richard Grudzinski, Edgar Dorantes and Ken Schaphorst).

While the viewpoint is contemporary, the essential building blocks of pleasurable music, namely melody, harmony and rhythm, are never slighted, and there is much to admire in the various moods and tempos, not to mention the ways in which the assorted instruments are used to underline and enhance the listening experience. To add even more variety, brief "Interludes" featuring various members of the ensemble, which seem more spontaneous than written, have been inserted between seven of the nine selections. One of those heard most often is the group's de facto leader, Daniel Ian Smith, a resourceful soloist on soprano, alto and baritone saxophones and on flute.

As noted, not a big band but a group that is certainly worth hearing and appreciating. Hats off to Smith, Pease and their colleagues for making such charming and tasteful music accessible.

There is one "ringer," trombonist Jiggs Whigham, who wrote the perceptive liner notes and is the lone soloist on the enchanting opener, David Raksin's classic film theme, "Laura" (smartly arranged by trombonist Joe Gallardo). Elsewhere, it's undergrads all the way, acquitting themselves with assurance and candor, individually and as a group. The rhythm section (Brandon Covelli, piano; Andrew Detra, bass; Brian Claxton, drums) is especially persuasive on "Yes or No" but nimble and attentive throughout. The trumpet section, ably led by Chris Bresette, brooks no miscues, nor do the trombones. As for the soloists, they are consistently admirable, starting with Hedenstrom (also heard on "Sumo" and "Soul Searching") and including Covelli ("Yes or No," Cerulean Skies," "Concerto"), Detra and Claxton ("Yes or No"), tenor Evan Benidt ("Skies," "Sumo," "Looking Back"), trumpeters Tom Krochock ("Skies," "Sumo") and John Raymond ("Sumo"), alto Corey Cunningham ("Skies," "Concerto"), accordionist Mike Renneke ("Skies"), guitarist Mike Wolter ("Soul Searching") and baritone Brian Handeland ("Concerto").

In sum, yet another strong entry in the burgeoning library of recordings by UW—Eau Claire's exemplary Jazz Ensemble 1.