By DUNCAN HEINING
January 28, 2015
Sign in to view read count 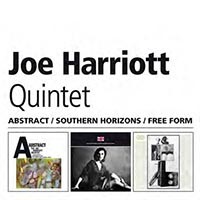 I don't think Joe Harriott's entire catalogue has ever been available at one time. Even in his heyday in the sixties, much of the 1950s material was unavailable. From the seventies onwards, things got really dire. Now that so much is out of copyright, Harriott's work is increasingly being reissued in CD packages, albeit in ways that are confusing and which duplicate other recently released recordings.

In 2012, Proper Records put out an excellent four volume set and at a remarkably attractive price. Younger fans were able to hear, perhaps for the first time, the saxophonist's progression through bebop to the abstraction for which he has become renowned. Of most importance to aficionados were the never before CD release of Southern Horizons and the restoration of Abstract, briefly available on Universal around 1999/2000 but since deleted. Featuring excellent sleevenotes that drew on Alan Robertson's authoritative biography of Harriott, the set also included the already extant Swings High (1967). Though this was issued with permission from Cadillac Records, how necessary this was in the circumstances is open to discussion. Its inclusion did, however, allow younger fans to hear how the guy sounded on a later blowing session.

Dutton Vocalion's reissue last year of Movement (1963) and High Spirits (1964) as a twofer has now been followed with the lovely, groundbreaking Joe Harriott-Amancio D'Silva Quartet album Hum Dono (1969). Although, of the albums made with John Mayer, only one is currently in the catalogue, new copies of Indo-Jazz Fusions and Indo-Jazz Fusions are still available at certain tax-avoiding websites.

Poll Winners Records have now also reissued Southern Horizons and Abstract, along with Harriott's first essay in free jazz, Free Form. Also present here are six tracks from the mid-fifties, which again can be found on the Proper Records' set. As I said above, confusing ain't it? Only, the mixed blessing that is Personal Portrait (1967), a set featuring tracks with a larger ensemble and another with strings, remains unavailable.

The music on Southern Horizons is a good late bop set culled from two EPs made for pioneer jazz producer Denis Preston's Lansdowne Series. Bassist Coleridge Goode and drummer Bobby Orr are already part of what would become Harriott's finest group. Though both pianist Harry South and trumpeter Hank Shaw would quit once the saxophonist entered his experimental period, here Shaw at least makes for an excellent foil for Harriott on a mixture of originals—by Harriott and South—and standards. Shaw was a truly and undersung British bebop practitioner and his trumpet lines are strong, bright and fluently executed. Booker Little might be a point of comparison, though not of influence. Harriott, himself, seems to pack so many ideas into each sixteen or thirty-two bar solo that comparison with Charlie Parker is inevitable. Frank Holder's bongo playing is major asset on the title track and on "Caravan"—I never thought I'd ever describe bongos as 'an asset' but credit where due. And yet, the record is let down by some of its material, notably the tunes by South—"Southern Horizons," "Jumpin' With Joe" and "Liggin.'" Nor does South's piano playing inspire this writer to plaudits. The frantic attack of "Still Goofin'" and the walking blues of "Count Twelve" are better by far and actually seem to carry the weight of the performances of Harriott and Shaw, whilst "Tuesday Morning Swing" does just what its title promises. Of the standards, "Caravan" is good, if a little predictable, whilst "You Go To my Head" is lovely ballad delivered with great tenderness. Best of all, is an intelligent arrangement of Horace Silver's "Senor Blues," which actually succeeds in sounding fresh and original.

Nevertheless, anyone buying this set will no doubt do so for Abstract and its predecessor Free Form. Firstly, both records were so much more than leader plus sidemen sets. There is an intricacy to them that recalls baroque music and a shared recognition that 'abstraction' in this context does not mean 'without form' but rather it replaces pre-arranged or pre-determined form with emergent form. The bonus tracks, as noted available elsewhere, are fine but in this context make-weights.

Free Form is the first genuinely distinctive and ground-breaking British jazz release, a music that speaks on its own terms. Later replaced by Bobby Orr, it features Phil Seamen on drums, Pat Smythe on piano, Shake Keane on trumpet alongside Harriott and Goode. There are hints here of the musical styles of Harriott's Jamaica, most obviously on "Calypso" but also present in the bubbling, skipping opening track "Formation." "Coda," with its perverse angularity, is dominated by a gorgeous, lyrical piano solo from Smythe, whilst the horns hover and comment like a Greek chorus from the sidelines. "Calypso" recalls Harriott's earlier piece "Revival," that had been recorded by both Harriott and by Chris Barber, in its roots in Caribbean popular and folk forms. But it also represents an advance on the earlier tune. This is incredibly confident music played with rare skill. Elsewhere, the fast bop-derived lines of Keane's trumpet on "Abstract" over liquid bass lines and amazingly loose drumming from Seamen, dissolve quickly into Harriott's declamatory alto before the brief entry of Pat Smythe's piano.

Nothing lasts. Nothing is fixed. The record's allusions to bop are oblique and almost ironic and at times there is an almost burlesque quality to these pieces. The playing is looser with the form and structure guiding but not determining the performances. Pianist Pat Smythe's role is no longer that of simply comping behind the front line, who improvise singly and together. He comments and interjects, as well. Seamen's role has shifted from time-keeping and, at times, it is almost as if he is now part of the front-line. As for Coleridge Goode, he seems to imply the pulse rather than state and restate it for the other musicians.

It would be hard to choose between Free Form and Abstract. Both are remarkable achievements. The music is simultaneously loose and fragmentary but has a sense of flow and conjures up a series of distinct moods. It appears now, if not at the time, as really quite accessible. The parallel here is, of course, with Ornette Coleman's early work, though Harriott always disputed any such lineage and his work owes much more to European art music and perhaps also to a Jamaican vernacular heritage. Abstract was recorded at two sessions nearly a year apart, at the second of which Bobby Orr took over from Phil Seamen on drums. Whilst there are stylistic differences between the two drummers both serve the music in very similar ways. The later session represents a consolidation rather than an advance on the earlier one or on Free Form. It is worth noting that Abstract achieved a five star review in Down Beat at the time, perhaps the first British jazz record to do so and one of few since.

The music is again oblique but also has a strong sense of shape to it. "Subject" opens with a series of sixteenth notes played at a fast pace by the two horns before settling into a strong blues groove over walking bass lines. There is a deft use of counterpoint from Harriott and Keane and a strong and highly rhythmic solo from Goode. But here and elsewhere it is the empathy and contrast between the saxophonist and trumpeter that is most immediately obvious. In their hands lies the dynamic behind this music. "Shadows" begins with a descending scale played by the horns and repeated by Pat Smythe with a trill before ending on an interrupted cadence. If anything, the form here is far looser than on the opening track and its broken and angular shapes lend the piece a dark, brooding quality. A lovely take on Sonny Rollins' "Oleo" follows which contrasts Harriott's freer approach to the melody with Keane's more clearly bop-derived playing. "Modal" offers a return to the blues that is defined by Smythe's perfect choice of chords, frequently inversions on those that represent the tunes underlying harmonic structure.

The remaining four tracks come from the earlier session with Seamen with Frank Holder again featured on bongos on both "Tonal" and the closer "Compound." Seamen's drumming perhaps owes more to his love of African percussion than is the case with Orr and his performance on "Tonal," in particular, is full of excitement, as he drops spectacular bombs behind the soloists. Smythe's playing here—and on "Idioms" -has just a few hints of McCoy Tyner in both his comping and own brief solo. It's intriguing to note that John Coltrane's classic quartet had performed their only London gig just ten days before this session. Was Smythe there? Maybe he had heard Coltrane's My Favourite Things. Yet, Smythe remains entirely distinctive in his own right, as his solo on the andante blues of "Pictures" reveals, which also features some fine playing from Goode on both pizzicato and arco bass, whilst the two horns throw a series of declamatory riffs into the mix. The episodic, shape-changing "Idioms" is marked by Harriott's keening, often high register solo supported initially by Keane's subtle statement of the modal scale underpinning the tune. Keane's own playing on fluegelhorn is quite magisterial. Here and elsewhere, his slightly more conservative approach offers the perfect foil to Harriott's more oblique phrasing. The track closes beautifully with softly-voiced horns over a limpid melody from Smythe, which builds to a brief crescendo. "Compound" consists almost entirely of an astonishing and tense duet between Frank Holder and Seamen before it ends with the horns statement of the tune, almost as an afterthought. This isn't just musical history. It is a moment captured in time but alive in the present. To quote Graham Collier, "Jazz happens in real time—once.}} It sure happened here.