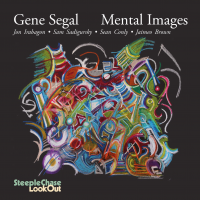 Guitarist and composer Gene Segal has put the intervening years between Mental Images and his recording debut, Hypnotic (Innova Records, 2009), to good use. While Segal still loves the funk, as the opening "Healing Feeling" definitively shows, the remainder of the album doesn't easily fit into any one musical pigeonhole;unless there's a category at your local music store called "accomplished, original jazz-rock from out of left-field."

Russian-born and Brooklyn-raised, Segal has assembled quite a band for "Mental Images." Jon Irabagon is everywhere these days, and he's definitely here playing alto in his typical virtuoso fashion. Sam Sadigursky, not to be overshadowed, plays several reeds; including some lovely bass clarinet on "Mind's Eye." Though he and Irabagon only share reed duties on "Healing Feeling," each proves to be a first-rate front-line partner for Segal. The drums / bass combination of Jaimeo Brown and Sean Conley is mercurial and adaptive enough to keep up with the young guitarist who, it turns out, can be quite a handful.

A quirky and unpredictable soloist, Segal's playing style is as mutable and restless as his composing. He gets his John Scofield on for "Healing Feeling" but quickly turns to a more personal style on "Allegory of the Cave," a dreamy waltz enlivened by the rhythm section's tight-but-loose interplay. The rest of the title suite stays in a harmonically hazy, almost free-ish mode, though Segal's incendiary duet with Irabagon on "Irrational Drives" closes the song cycle out with a huge exclamation point.

The second suite, "Circus Music," starts off in a similarly reflective mode, though fine solos by Sadigursky and Segal ramp the energy up during the course of "The Bearded Lady." "Trapeze Act" is a delicate filigree, while the swaggering, bluesy "Ringmaster" is perhaps the most forthrightly jazzy piece on the album. "Elephants" is the real surprise; a heavy sort of tune with a lugubrious theme, Segal's solo is an all-out twisted, distorted noisefest that could make Brandon Seabrook green with envy. Sadly, the piece fades out in the middle, ending an otherwise fine album rather weakly.

The fact that Mental Images is comprised of two conceptually- distinct four-part suites suggests that the music of guitarist Gene Segal may be rooted in something deeper than a simple desire to earn a living playing original music. Segal's brief liner note points out Olivier Messaien as a seminal influence. While it's tough to establish a clear link between Messaien's mathematically-driven avant- gardism and the turbulent jazz rhythms and complex harmonies that pervade Mental Images, Segal singles out Messaien's notion of working with (or against) self-imposed compositional limitations as something that's really fed his musical soul. Just what these limitations might be is left for the listener to decide.