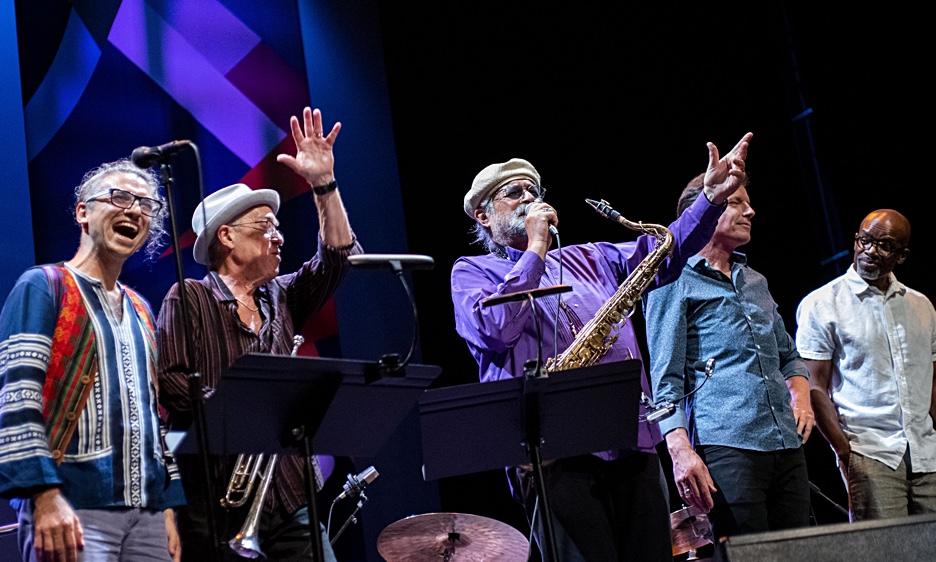 Not quite ten years ago in 2014, the Tri-C JazzFest morphed from a spring event held largely on campus to a summer happening in downtown Cleveland's Playhouse Square. Like with most festivals, the pandemic put the kibosh on the event's usual format. After a two-year hiatus, all activity recently shifted back downtown for an inspired return to form.

In customary fashion, local acts held forth on the outside stage, while ticketed concerts took place inside at the various theaters. The educational component also returned with vigor as the additional Next Gen Stage hosted many student ensembles. Sitting squarely within the status quo the festival has maintained for several years now, there is a smattering of ticketed shows that lie outside of the mainstream jazz tradition. Aside from those events and the outdoor performances, this review covers the rest of the sets that filled the festival's generous Friday and Saturday schedules.

A native of Ohio and an active educator on many fronts, trumpeter Sean Jones returned to the festival with his quartet for a diverse show that offered sustenance on many levels. Jones waxed poetic about the fickle nature of success, spanning from a defeating review in Down Beat of one his early albums to his recent appearance on the cover of the same magazine. Later in the set, spoken word artist Orlando Watson tapped into the mood with some stunning prose of his own.

In the tradition of jazz musicians grafting their own melodies onto standard changes, Jones displayed his clarion voice on "How High?," a piece he says was inspired by a "long night with some herbal sustenance." Pianist Allyn Johnson dazzled with an intense solo that smoldered over the course of its duration. Not to be outdone, bassist Endea Owens offered her own statement that hit on both technique and emotion.

The centerpiece of the set would be an original that Jones wrote thinking about the supercontinent that existed in the past. The idea of easily traveling from one nation to another intrigued Jones as a way that might foster unity among human kind if it were still possible today. Propelled by drummer James Johnson III's organic slant, "Pangea" turned into a musical travelogue that also spoke to Jones' ever-evolving maturity as a gifted composer.

For the closing number, "Prof," Jones affirmed the value of mentorship in his musical life and the obligation to return the favor to today's budding generation. In the tradition of benchmark numbers like "Cherokee," Jones' original offered its share of challenges which were tackled with poise by special guest Thomas Schinabeck. Just 19 years old, the alto saxophonist recently finished his freshman year at Peabody Institute where Jones is on faculty.

Friday's straight ahead offerings concluded with a set by Sound Prints, the quintet led by trumpeter Dave Douglas and saxophonist Joe Lovano. While the group has been around for almost ten years, their status is not quite what it should be based on the talent involved. Inspired by the muse of Wayne Shorter, Douglas and Lovano craft collaborative statements and smoldering solo lines while interacting with a rhythm section capable of shifting gears on a dime.

Drummer Rudy Royston would kick off "Midnight March" with military drum licks before bassist Matt Penman ushered in a pedal point that found Royston switching to the spang-a-lang of his ride cymbal. For "Ups and Downs" the unifying factor would be a six-note repeated riff from Douglas and Lovano. The pair struck a perfect blend in conjoining lead tones and in their individual statements, with pianist Leo Genovese serving as somewhat of a wunderkind when it came to pulling the audience's coattails.

Cleveland is proud to claim Lovano as a hometown hero, and one of his originals would tip the hat to an iconic jazz spot from the past. "The Corner Tavern" was penned for a club once located on East 78th and Cedar Avenue, which was a regular hang for Lovano's father Tony. The front line locked in for a lanky melodic statement marked by various hits over a fluctuating groove.

Part of the magic of this group's set would be the variety of material. "Libra" calmed the seas with a ballad moment that brought forth eloquent solos from both horns. "The Flight" would close the evening on a high note, both Douglas and Lovano trading licks back and forth under the support of the rhythm section. Genovese built his statement with the skills of a master storyteller. At its peak, the pianist's solo invoked the abstractions of Cecil Taylor mixed with the melismatic style of Oscar Peterson.

At first thought, the inclusion of Raul Midon in Saturday's festivities might have seemed like an unusual choice. However, Midon has collaborated with many jazz artists over the years including Herbie Hancock, Nicholas Payton, Gerald Clayton, and the Metropole Orkest. Furthermore, Midon's style in accompanying himself is a model of spontaneity and joie de vivre. By tapping the body and fretboard of his acoustic guitar, he propels the music harmonically and rhythmically, often using his lips to create a "faux" trumpet effect.

Among the many highlights of a very generous set, Midon's "I Love the Afternoon" hit a samba groove punctuated by bass tones that traditionally would be played by the Brazilian surdo. Akin to the style of George Benson, Midon also scatted unison lines in tandem with his guitar licks. "Sunshine" bred an equally sunny attitude as Midon used his left hand to play the guitar and high right hand to play the bongos. Chick Corea's "Spain" provided a stunning tour-de-force example of Midon at his most sublime, recalling the inspirational Al Jarreau.

Proving that his multifaceted talents know no bounds, "Bad Ass and Blind" lived up to its title with Midon's rapping mingling with profound lyrics that went far beyond the hip hop norm. A master at pacing a set, Midon also took to the piano for his poetic "Listen to the Rain," which was inspired by songs about rain, particularly Joni Mitchell's "Rainy Night House" and the Beatles "I'm Fixing a Hole." A touching nod to his recent bride, "Waited All My Life" concluded an awe-inspiring recital from a talent deserving of wider appreciation.

NEA Jazz Master Eddie Palmieri has taken the stage at Tri-C JazzFest several times over the history of the event. His return this year was marked by a smaller ensemble, but the cumulative effect was no less profound than when he has led much larger groups. As Palmieri himself summed it up at the start, "You will see it and hear it, but you are not going to believe it!"

Flanked on three sides by audio monitors due to his current hearing deficits, Palmieri was no less the dynamo at 85 years old than at any other time in his recent past. He worked the crowd and invited them to clap along to the clave beat as the group launched into "Picadillo." Bassist Luques Curtis simultaneously held down the fort while also propelling the music forward. The front line of alto man Louis Fouché and trumpeter Jonathan Powell spoke with a clarion call that bristled with enthusiasm.

It seemed the pianist must have had Cal Tjader on his mind during the evening. The aforementioned "Picadillo" would be featured on an album the pair made back in 1966. Since Tjader was under contract to Verve at the time, the usual practice for featuring Palmieri was to have the duo cut another set for Palmieri's label, Tico Records. From that record, Bamboleate, Tjader's breezy "Samba do Sueno" would strike a sunny pose. As combustible as Fouche's alto statement would be, Powell's flugelhorn smoldered in a cooler manner, providing a musical yin and yang.

Recalling his days playing the dance halls of New York City, Palmieri's set concluded with the iconic "Azucar Pa' Ti." With a remarkable hybrid setup including timbales and components of a typical drum set, Luisito Quintero played his array of instruments standing up and impressed with the sheer thrust of his groove. Not to be outpaced, Vicente Rivero used his mighty hands to tell stories of his own on congas.

As the festival wrapped up with award presentations and shout outs to sponsors, the closing performances commenced with an intimate duo set by pianist Kenny Werner and harmonica player Gregoire Maret. Offering homage to Toots Thielemans, who would have celebrated his 100th birthday this year, the pair touched on material associated with the Belgium jazz artist primarily known for playing harmonica. Often utilizing synthesizer to lay a lush bed of strings, Werner complimented Maret's brilliant flights of fancy on "Bluesette," "Chega de Saudade," "All Blues" and "What a Wonderful World."

Another veteran of the festival, bassist and bandleader John Clayton returned this year flanked by an all-star big band that included talent from Northeast Ohio and beyond. Holding down the fort in the rhythm section would be Detroit legend Rodney Whitaker on bass and New York dynamo Ulysses Owens, Jr. on drums. Clayton's arrangements of standards would be the focus of the first half of the set. An upbeat take on Horace Silver's "The Jody Grind" found trombonist Sam Blakeslee and tenor saxophonist Rickey Woodward stepping out front for bristling solos.

The iconic "Eternal Triangle" proved the perfect feature for the saxophone section as each horn man stood up for their moment in the spotlight. Particularly attractive were the contrasting styles of altoists Chris Coles and Dick Oatts, the former speaking in the be-bop vernacular while the latter's muse hinted at West Coast cool. Trumpeter Dominick Farinacci delivered a musical oasis with a breezy "My Foolish Heart" capped off by Clayton's "Silver Celebration," which also put the spotlight on Owens' masterful brush work.

Back in 2006, John Pizzarelli teamed up with the Clayton-Hamilton Jazz Orchestra to record Dear Mr. Sinatra and that vehicle for honoring the legacy of Frank Sinatra would also provide a blueprint for the second half of the evening. Pizzarelli was clearly in his element complemented perfectly by Clayton's sagacious arrangements, which also allowed room for soloing. "You Make Me Feel So Young," "Come Fly with Me," and "Witchcraft" were logical choices to be sure.

Equally pleasing to fans of crooning as to those with an ear for jazz guitar, Pizzarelli commanded the stage with some stimulating spells on guitar as well as scatting along with his own melodies. Clayton picked up the bass to bow alongside Pizzarelli during a tender moment and then brought the evening to a close shuffling along with the band as Pizzarelli affirmed "Yes Sir, That's My Baby."