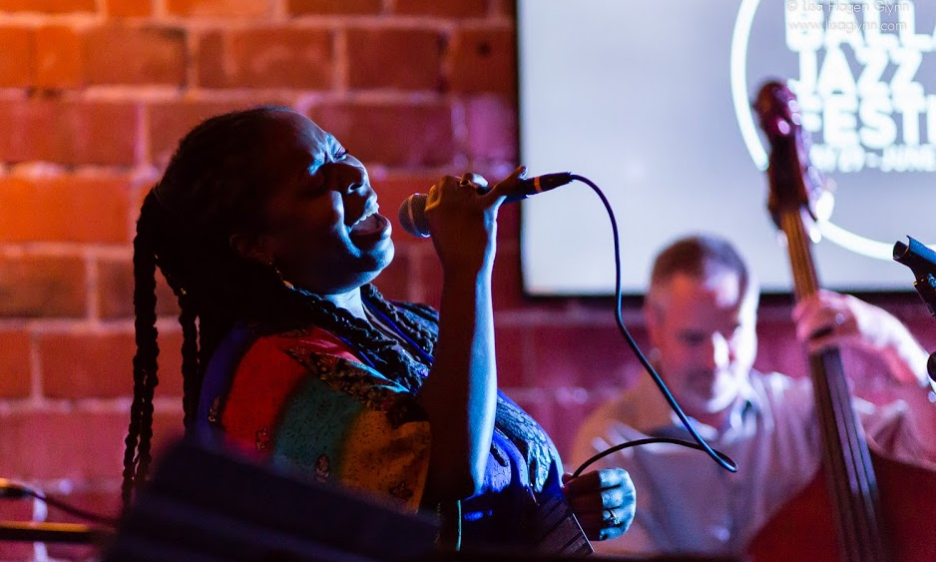 I just try to take all of that and do my best with it, and create the best representation of myself, my people, the times, it's just a little gift I put down, and hope someone picks up and appreciates.
—Johnaye Kendrick

The city of Seattle has a jazz history that dates back to the very beginnings of the form. It was home to the first integrated club scene in America on Jackson St in the 1920's and 30's. It saw a young Ray Charles arrive as a teenager to escape the nightmare of Jim Crow in the south. It has produced such historical jazz icons as Quincy Jones and Ernestine Anderson. In many instances it has acted as a temporary repose for greats such as Jelly Roll Morton, Joe Venuti, the aforementioned Charles, Larry Coryell, Julian Priester and Randy Brecker, to mention but a few.

The city of Seattle has attracted musicians from afar for the entirety of its rich cultural history. A preponderance of diverse influence began to take form in an actual sound indigenous to the city. Those who arrived in turn absorbed the unique cultural qualities of the region, for many years a remote outpost, now bursting at the seams in virtually every way possible.

Johnaye Kendrick arrived in Seattle for her own set of reasons, and was too swept away in northwestern culture. The native of San Diego had just completed her education at the Thelonious Monk Institute at Loyola University in New Orleans. Her exposure there led to performance credits with legendary NOLA players Ellis Marsalis, Nicholas Payton and Terence Blanchard, as well as iconic artists Wayne Shorter and Danilo Pérez. Bandleader Payton remarked, "Johnaye has the potential to be a vocalist of the highest order, the likes of which we have seen seldom since the grande dames of the golden era of jazz roamed the earth. She's got it!"

Kendrick's arrival was in large part for a very practical reason-employment. She and her husband were now the proud parents of two twin girls, and Seattle's Cornish College of the Arts was calling. Kendrick is a full Professor of Music at the esteemed institution. Somehow, someway, she has found the time to be a mother, teach, record, and have a noted performance career, while seeing to her teaching and mentoring responsibilities that she takes deeply to heart. After her time in New Orleans, she set out to explore the local jazz scene in Seattle, and was pleased with what she encountered.

"I love Seattle, to be honest, Seattle is tough to come to from New Orleans. New Orleans is a different kind of vibe. New Orleans is like going to grandma's house. It's like, 'Come on over, come get yourself something to eat.' Seattle is a little different. I had an advantage because there was a little bit of press when I moved here for the position at Cornish. That opened a lot of doors, and allowed for me to perform at Tula's, and do different things around the community. It's a little tougher to penetrate the trust circles. You just have to hang, you have to hang at the Owl (legendary jam session), I love that place. You never know who's going to be in there, and it's always a gift to be on that stage," she says.

As doors began to open for her, she discovered that Seattle was not as far off the beaten trail as one might suppose. In fact, while New Orleans is generally off the tour circuit, Seattle is a must stop, a city in an unparalleled period of growth that produces both positives and negatives. Nonetheless, the depth and broad diversity of the music scene in the city was a strong inspiration for Kendrick to find her true, original, musical self.

"The cool thing about Seattle is, when I moved here from New Orleans, I had been there for three years. I saw more amazing live music in the first six months of living here than in the three years I lived in New Orleans, excluding Jazzfest. New Orleans isn't really on the tour circuit, it's kind of out of the way. Everybody comes through Seattle. That's one thing I love about Seattle, there's so much good music happening all the time," she remarks.

Kendrick has found a cadre of musical souls in Seattle to perform with, both in the studio and in live performance. In drummers D'Vonne Lewis and Byron Vannoy, bassist Chris Symer, saxophonist Mark Taylor and trumpeter Thomas Marriott, she has found musicians that connect with her personal style expressed in her original compositions. She and pianist Dawn Clement, a fellow colleague at Cornish who now teaches at Metropolitan State in Denver, became fast friends and collaborators. They seem as well matched a pair in jazz music as can be formulated. Her brief history in Seattle with this unique group of musicians has resulted in two highly acclaimed releases. Here (Johnygirl, 2014), and the more recent Flying (Johnygirl, 2018) introduced the jazz world to a talent so original, as to be described in different circles as generational. While so many modern vocalists can be identified in relation to the great Sarah Vaughan, or the standard set by Ella Fitzgerald, Kendrick's signature seemed to be more comparable to a great horn player. She, very much like another great modern vocalist, Cecile McLorin Salvant, has the ability to express emotion and inject meaning into a song no matter the traditional lyrics. Jazz standards carry with them not only transcendent melodies and harmonies, but as well lyrics that contain the social standards of their time. For Kendrick, as a musician, it's the melody that draws her in.

"The thing that gets me first is the melody, and the harmony. I'm really sensitive to certain sounds, they pull at my heart before a lyric will. There's some songs that I love that I just hate the lyrics to. Want to know one? 'Old Folks.' That melody is beautiful, but have you looked at those lyrics? Nobody sings it. It's such a beautiful song though. That's the stuff that gets me. Sometimes the lyrics lift it to an even higher level especially if I connect with whatever the story is. But at the same time, I also think a lot of times you sing stuff that you might not be so connected with initially. I'll find a way to dedicate whatever it is I'm singing to someone or some things that I can connect with it in the deepest way possible. I mean, I can sing about oatmeal if I have to," she says.

Jazz audiences in Seattle and around the country have witnessed an artist's vision come to fruition in a way that integrates her art, her students, and her life with her family as one effort without separation. She may sound at times to be from another era, and yet so true to herself artistically that her sound is ultra-modern. She is moving the music forward not only as an artistic statement, but as a sense of responsibility as a mentor to her students.

"Going forward, I can only dream that my music is actually something that is present, and considered to be something important, that's just a dream. I can't visualize that though, because I'm constantly searching and trying to create something that will stand the test of time. I can't pretend to assume that it will," she says.

A remarkable aspect of the evolution of jazz music is that despite its musical sophistication, the music traditionally has been taught by community elders sharing their craft with new generations of musicians. With that task largely being facilitated in modern times in institutions of higher learning, the imperative for instructors at those institutions to provide mentorship and opportunities for students to gather and play is paramount. It isn't always easy. It is to her student's benefit that their mentor is an artist of great integrity that continually searches for new avenues of expression within her sound. It speaks to the real life experience of being an artist in the 21st century.

" I have so much pressure on myself right now, because I feel this huge responsibility to create art that will represent our times, and speak to my feelings about our times. As an artist, I want to say what I want to say, but I also want to create music that will give people strength, and to make them happy. The other thing is to also encourage my students, to create, they give me hope, says Kendrick.

Kendrick's most recent collaboration is with a new vocal ensemble named Saje. The band features noted vocalists Sara Gazarek, Amanda Taylor and Erin Bentlage along with Kendrick. The foursome is accompanied by guitar and bass only on their new single release, Desert Song (Sajevoices, 2020), putting their striking melodicism, and perfect harmonies in the forefront. An album is in the plans over the next year.

It seems as though many artists these days are playing great music that doesn't necessarily draw from their experiences in everyday life. Those experiences can be anything from the spiritual to the mundane. What makes the music of Kendrick so dynamic is the honest emotion that accompanies it. Her perfect pitch, and astonishing range are the vehicles that carry the sound, but her true integration of life experience and art is what elevates the music dynamically. Like so many souls that have been drawn to this beautiful corner of the world, the city of Seattle is the fortunate beneficiary of her decision to put down roots here. Between art, family and occupation lies the creative fodder to make great music, and pass it on those who would be fortunate enough to cross paths with her.

"I just try to take all of that and do my best with it, and create the best representation of myself, my people, the times, it's just a little gift I put down, and hope someone picks up and appreciates."