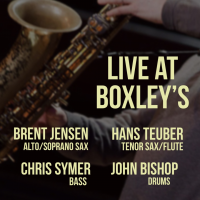 More Sounds of a Dry Martini

Label: Nefertiti Records
Released: 2021
Track listing: Yours Is My Heart Alone; Like Someone In Love; I Thought About You; On The Street Where You Live; Milestones (original version); Body And Soul; How Am I To Know; Darn That Dream; I Love You; It Could Happen To You; Monk's Mood; San Francisco Holiday(Worry Later)

Guitarist Henry Robinett is a patient man. In April 2000, when he was between gigs and bands, he brought together several top players from Northern California and, in two days, recorded two albums the first of which was called Jazz Standards, Volume 1: Then (Nefertiti 2019) . Now with the release of ...

Label: Nefertiti Records
Released: 2020
Track listing: I Hear A Rhapsody; Yellow Days (La Mentira); The Days of Wine and Roses; The Way You Look Tonight; Ill Wind; East of the Sun; Invitation; Soul Eyes; Why Do I Love You?; Pinocchio.