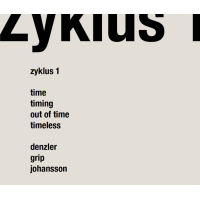 The third release by the trio Neuköllner Modelle, saxophonist Bertrand Denzler, bassist Joel Grip, and drummer Sven-Åke Johansson, Zyklus 1 might be considered a zen chronicle. The four lengthy tracks reveal the true nature of improvised sound, group interaction, and thus, the essence of meditation. Like meditation, their music is very simple, yet extremely hard to execute.

The use of the classic saxophone/bass/drums configuration yields nothing like trios led by Albert Ayler, Sonny Rollins, or Charles Gayle. Even if you recognize Johansson (b. 1943) as a doyen of free jazz, the leadership of this trio here cannot be affixed solely to him. Listeners might consider him the Swedish Han Bennink, but it is more accurate to refer to Bennink as the Dutch Sven-Åke Johansson. No, this is a leaderless trio, and that might be where the zen comes in. There are no hints of grandstanding and no protracted solos.

What these four pieces contain are sustained collaborations—no better yet, corroborations. Grip, who released a mesmerizing solo recording Pickelhaube (Umlaut, 2012), also performs in more conventional jazz settings and with vocalists. His bowing technique here sounds at times very much like a second horn, and he can also maintain a pulse that often mimics the life force of the heart. Denzler, a giant in the world of free improvisation, in bands such as Hubbub and Trio Sowari, applies his own minimalist take on the sound of John Coltrane to match the meditative vibe of this partners. With Johansson pleased to exercise brushes on cymbals and skins, and make tattooed remarks, as a means to keep this music constantly buoyant; the music remains a faithful prayer.