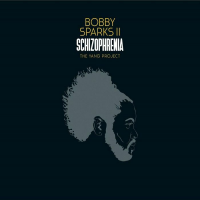 Listening to this incredible double CD it's hard to believe that this is Bobby Sparks II's first album under his own name. Granted he has contributed to many records in his quarter-century career, notably with the likes of Kirk Franklin, Roy Hargrove, Marcus Miller, Fred Hammond and Annie Clark (aka St. Vincent). However, this prodigious double-album debut certainly makes up for lost time. With the clue in the title, Schizophrenia: The Yang Project, this is a veritable potpourri of genres. Sparks began playing early, having received a Hammond B-3 from his parents on his sixth birthday. His mother, a church organist, showed him many gospel tunes but his father was a bebop trumpeter so the jazz influence came from him. In addition to the music of Dizzy Gillespie, Sonny Rollins, Sonny Stitt and Miles Davis, Sparks Senior also introduced his son to the music of organists such as Jimmy Smith and Jimmy McGriff. So jazz runs through Sparks' veins in equal measure to gospel, both being strongly in evidence here.

Opening the first CD is "Birth Of The Sparkchild" which, throughout its three minutes, uses Orlando Watson's voice-over lowered in pitch and channelling the few seconds of the famous "Paul Caruso" interview on Jimi Hendrix's "EXP," the equally quirky intro to Axis: Bold As Love (Track, 1967). This might be seen as overindulgence but there are more of these vocal interpolations arising at various points over the course of the two CDs, such as the start of the funkfest "Bobby Sparks Sr.'s Famous Chili" or the sampled dialogue constituting the short "A Girl From Tahiti (Interlude)." The heavy-duty riffing on "The Comanche Are Coming," replete with Dywane Thomas Jr's mega slap bass, Robert Searight's frenetic drumming and guitar and Sparks' haunting keyboards, makes it an unequivocal killer track. There's more than a hint of keyboard-master George Duke's influence here, with just a soupcon of Frank Zappa thrown-in for good measure.

The title track is a lustrous affair, its underlying urgency adorned by strings and wordless vocals. "We Play What We Want" is based on Thelonius Monk's "I Mean You" but is embellished with brass, rap and catchy backing vocals. With soulful vocals by James Robinson, "So Fine" is a groove-laden outing that could have easily been included in Prince's repertoire. By contrast, "Black Man Running From The Police" starts where Childish Gambino's "This Is America" finishes, the hurried footsteps a precursor to the dramatic urgency of the number, embellished by a taut string section.

CD 2 kicks-off with the funky "Stono River," a little reminiscent of the irrepressible vamps evinced by Marcus Miller. The fast-paced, labyrinthine lines of "Lio Is Weird As Hell" are followed by the breezy, soulful rapping on "All Mine." The orchestral and vocal arrangements on "Let's Take A Journey" elevate the song to an anthemic level whereas "Can We Make Love?" is a gorgeous song underpinned by Pino Palladino's resonant bass guitar. The Eastern influence of "Islam (Hadjdj From India)" is unmistakable but there are Western influences too, such as turntables, courtesy of Ernie G. "Take It!" is augmented by the late Roy Hargrove on trumpet and phased drumming from Mark Simmons whilst Sparks himself introduces no fewer than seven different keyboards to the fine affair (he employs even more on other tracks). The reflective "Zelin" benefits from elegant piano from Sparks and the finale is "Mark Vs Simmons (A Secret Drum Story Of Houston, Tx)" with spoken comments name-checking Sparks' home state of Texas. This is an ebullient drum-fest, super-powered by a multi-tracked Simmons playing in three different styles over three channels, left, right and middle. It would be no exaggeration to summarise Schizophrenia: The Yang Project as an extraordinary album, awash with a plethora of truly gripping music.

CD 1: Birth Of The Sparkchild; Schizophrenia; We Play What We Want; Bobby Sparks Sr.’s Famous Chili; The Comanche Are Coming; A Girl From Tahiti (Interlude); So Fine; I Miss U; Black Man Running From The Police. CD 2: Stono River; Lio Is Weird As Hell; All Mine; Let’s Take A Journey; Can We Make Love?; Too Late Now, Boss Man! (Interlude); Islam (Hadjdj From India); Take It!; Zelin; Black Change; Bonus Track: Mark Vs. Simmons (A Secret Drum Story Of Houston, Tx).