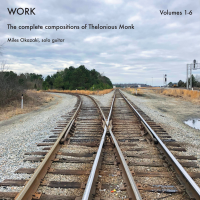 The best way to embark upon Miles Okazaki's six-volume Work: The Complete Compositions of Thelonious Monk is the same manner you might approach Herman Melville's American masterpiece Moby-Dick; or, The Whale. Like Moby-Dick with its 135 chapters (and epilogue), Work is a Brobdingnagian accomplishment. Okazaki performs the complete Thelonious Monk songbook. 70 tunes in total.

The accomplishment here is not the 4 hours and 44 minutes of music, but Okazaki's dedication to the Monk oeuvre. The only other artists to take on the complete songbook are pianist Alexander von Schlippenbach's Quintet on Monk's Casino (Intakt, 2005). Did you notice that Okazaki is a guitarist? He translates all the pianist's keyboard notes to perform on his Gibson Charlie Christian archtop guitar. There have been guitar tributes to Monk, like the excellent Peter Bernstein Trio Monk (Xanadu, 2008), Joshua Breakstone Let's Call This Monk! (Double-Time, 1997), and Bobby Broom Plays For Monk (Origin, 2009), all trio sessions. Pat Thomas recorded the quirky solo Plays The Music of Derek Bailey & Thelonious Monk (FMR, 2007) and Ken Aldcroft and drummer Dave Clark gave us Hat & Beard (Trio, Records, 2011). Even ex-Police guitarist Andy Summers tried his hand at Monk with Green Chimneys (RCA, 1999).

Okazaki executes Monk like, well, Monk. If you listen to just a few tracks per day it might help you to match the music with Monk's original recordings, especially his solo work. There are several recordings of Monk practicing his compositions, and the multiple takes available on a release like Monk Alone: The Complete Columbia Studio Recordings 1962-1968 (Columbia, 1998), to give insight into the great man's process. Okazaki spent an entire year submersed in Monk's world. He had come in second in the 2005 Thelonious Monk guitar competition, but since that date he has been an in-demand collaborator with Dan Weiss, Jonathan Finlayson, and Steve Coleman. This recording is on equal footing with the great Monk interpreters, Walter Davis Jr., Tommy Flanagan, Alexander von Schlippenbach, Misha Mengelberg, and Steve Lacy.

His commitment for Work was complete obedience. The music is not the sounds of Miles Okazaki with Monk flavors, it is in essence what Monk would have sounded like, if he was a guitarist. Each cover is played (almost) without embellishment with just six selections longer than 6 minutes. Okazaki chose, after recording his first track, "Work," where he does a rambling walkabout, to trim any excess embellishment from his performance. It is a kind of 'WWTD' (What Would Thelonious Do?) approach. Highlights are almost too many to mention. Okazaki executes the knotty "Trinkle Tinkle" with jaw-dropping ease; likewise "Epistrophy" is played (quite unbelievably) without overdubs and "Monk's Dream" echoes almost orchestrally. Okazaki's take on Monk may make him famous, and to quote Monk, "Ain't that a bitch?"