”Fire in velvet. A fitting description of Joshua Breakstone's jazz guitar,” wrote Paul Weidman in The Sante Fe New Mexican. “His flowing lines on up-tempo cookers are impeccably clean and fiery, bearing the mark of a first-rate improviser, while his chordal work on heartbreaker ballads is the final word in finesse,” has raved Guitar Player magazine. Japan's Jazz Hihyo (aka Jazz Critique) recognizes that “The style in which Joshua develops his fluid single-note solos used to be thought of as the Grant Green school, but now this man leads the school.” Downbeat also has written that “There is no shortage of young, knock-out jazz guitarists about us these days. And Joshua Breakstone is among the best of them.”

Joshua Breakstone was born July 22, 1955 in Elizabeth, NJ. Through his music loving parents he was exposed to Broadway shows, Broadway show cast recordings, and the New York Philharmonic Orchestra. Through his older sisters he was exposed to all kinds of other music- including jazz and rock and roll. “My sister Jill worked for the light show at The Fillmore East where I could hear all the bands regularly, especially my then-favorites Jimi Hendrix and Frank Zappa.”

“I picked up the guitar around the time I was 14 and began playing with an interesting high school group called Moon Unit which consisted of guitar, bass, drums, organ, and flute. It wasn't your typical late sixties rock and roll instrumentation. I was exposed to jazz regularly as a kid, but it never caught my ear until I heard Lee Morgan. Lee's sound was exciting and made me want to hear more jazz. The first jazz people who turned me on were trumpet players, then I heard Charlie Parker.”

“The fire of Lee Morgan played with grabbed me immediately,” he says, “and the way both he and Clifford Brown fully articulated each note has been an ideal toward which I work with regard to the sound I try and get on the guitar. When I heard Bird, I knew I wanted to play like him in the sense of playing things which are meaningful, emotional, and, more than anything else, irresistibly beautiful. The guitar is a real challenge because it tends to be a very visual instrument and lends itself to patterns. In a way, I try and get away from the guitar and into the world where music exists in and of itself, where ideas, articulation and sound exist apart and away from the instrument.”

At that same time Joshua began studying in Manhattan with Sal Salvador. “Sal was a great teacher, a great person, and eventually became a great friend. He exposed me to a broad range of music and helped me accomplish a lot on the instrument in a relatively short time.”

In 1972, Breakstone entered New College of the University of South Florida (Sarasota, Florida), where he graduated in three years - including two terms at Berklee College of Music (Boston, Massachusetts)- in 1975 with a degree in jazz studies. After graduation Joshua spent several months in Brazil, then moved back to New York where he taught and performed while taking graduate courses at NYU. In 1979 he made his recording debut on Canadian reedman Glen Hall's Book of the Heart (Sonora Records 101), with JoAnne Brackeen, Cecil McBee, and Billy Hart. During the period leading up to his first recording as a leader in 1983, Wonderful! (Sonora Records 222 with Barry Harris, Earl Sauls, and Leroy Williams), he was residing in New York, performing with people like Vinnie Burke, Warne Marsh, Emily Remler, Dave Schnitter, and Aaron Bell, teaching both privately and at the Rhode Island Conservatory of Music (Providence, Rhode Island). The following year he recorded again for Sonora Records, 4/4=1, with Kenny Barron.

In 1986 Breakstone began a four year contract for four recordings with Fantasy Records' Contemporary label. First was Echoes, with Pepper Adams, Kenny Barron, Dennis Irwin, and Keith Copeland, followed by Evening Star the following year with Jimmy Knepper, Tommy Flanagan, Dave Shapiro and Keith Copeland. Self Portrait in Swing followed in early 1989, followed by 1990's Nine By Three, Breakstone's first trio recording, with Dennis Irwin and Kenny Washington. Josh has written, “During the course of my four short years with Contemporary, I spanned two eras in the recording industry in that my first two recordings were released only on LP, my third was released as both LP and CD, and my last, Nine By Three, was released only on CD.”

1986 was the year of Joshua's first Japanese tour. Since that time he has toured throughout Japan usually twice a year both with his own groups as well as with the groups of such noted Japanese musicians as Terumasa Hino, “Monkey” Kobayashi, and Eiji Nakamura. In 1991 Joshua began recording for the Japanese King Record label, an association that led to four recordings. Walk Don't Run was followed by I Want To Hold Your Hand and Oh! Darling - two CDs of Beatles compositions rearranged and adapted to Breakstone's musical point of view. On all three are heard the formidable rhythm section of pianist Kenny Barron, bassist Dennis Irwin, and drummer Kenny Washington. The subsequent Remembering Grant Green features Grant Green bandmates, organist Jack McDuff and drummer Al Harewood. Kenny Barron returns as well on two tracks, this time with bassist Ray Drummond and drummer Keith Copeland.

Sittin' On The Thing With Ming, his 1993 debut recording for Capri Records, consists mostly (except for one selection) of Joshua's original compositions. “ In live settings I tend to play a mix of originals and standards, I'm always writing new things. After four CDs of theme recordings for King, I had amassed quite a lot of original material which ended up seeing the light of day - in terms of being recorded for the first time - on Sittin' On The Thing With Ming.” This was followed by his 2001 recording, Tomorrow's Hours, a tribute to the compositions of Wes Montgomery and 2003's A Jamais (Forever). “A Jamais was recorded in the south of France with French musicians, the first time I've recorded outside the US. It also consists, as does Sittin' On The Thing With Ming, almost entirely of my own originals, some of which had been previously recorded, others being recorded here for the first time.”

1996's Let's Call This Monk, with bassist Dennis Irwin and drummer Mickey Roker marks Breakstone's debut for the Double-Time label. In 2000 he recorded a subsequent tribute to another of the great jazz pianists with his The Music of Bud Powell. Sandwiched in between on Double-Time was his 1999 This Just In.

There is one additional and very unique item of interest in Joshua's discography as a leader, Japanese Songs. “As it says in the liner notes, it all began with the gift. When I was touring Japan in the spring of 1999, I was given an extraordinary present by Junko Noda, an opera singer, pianist and teacher - a handmade book of Japanese songs. From this gift sprang the Japanese Songs CD, which is self produced- a limited edition of only 1000 copies, each one hand signed and numbered. I'm really proud of this very special project.”

What does the future hold for Joshua? “We may do another recording in France, possibly a duo with the brilliant Louis Petrucciani who plays so fabulously on A Jamais. We're also discussing doing a recording in Japan with Japanese musicians. I'm leaving a few days free to visit studios on my next trip there, in April.” “I'm basically trying to do what I do better and better. I'm trying to keep writing, constantly learning new tunes and being exposed to players who are new to me - I feel that my travel and performance schedule contributes a lot to my growth, and hopefully the recordings will document that.”

“In teaching, either in clinics or individually, I describe to students the progression we make as jazz musicians, starting with learning to improvise, to negotiate any harmonic terrain, which could be a lifetime of work right there. But when we take a step back and consider, to become an improviser is not really to have accomplished anything at all- the goal in jazz is one of self expression- to become a unique voice, to say something in our own way, with our own voice. It's only in the taking of this leap- from someone who improvises to someone who communicates- that we go from being musicians, craftsmen, to becoming artists. I don't worry about trying to be this thing or that other thing, my idea has always been to try and say something straight from my heart. It's always been my conviction that if you say something unique, in your own way, and honestly, that there will always be an audience there for you, you'll always be all right.” Show less 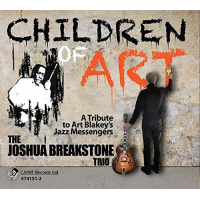 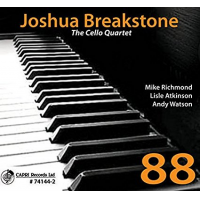 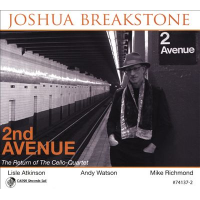 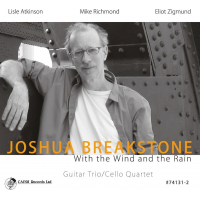 With the Wind and the...

With the Wind and the...

From: 88
By Joshua Breakstone

From: 2nd Avenue
By Joshua Breakstone

All About Jazz musician pages are maintained by musicians, publicists and trusted members like you. Interested? Tell us why you would like to improve the Joshua Breakstone musician page.